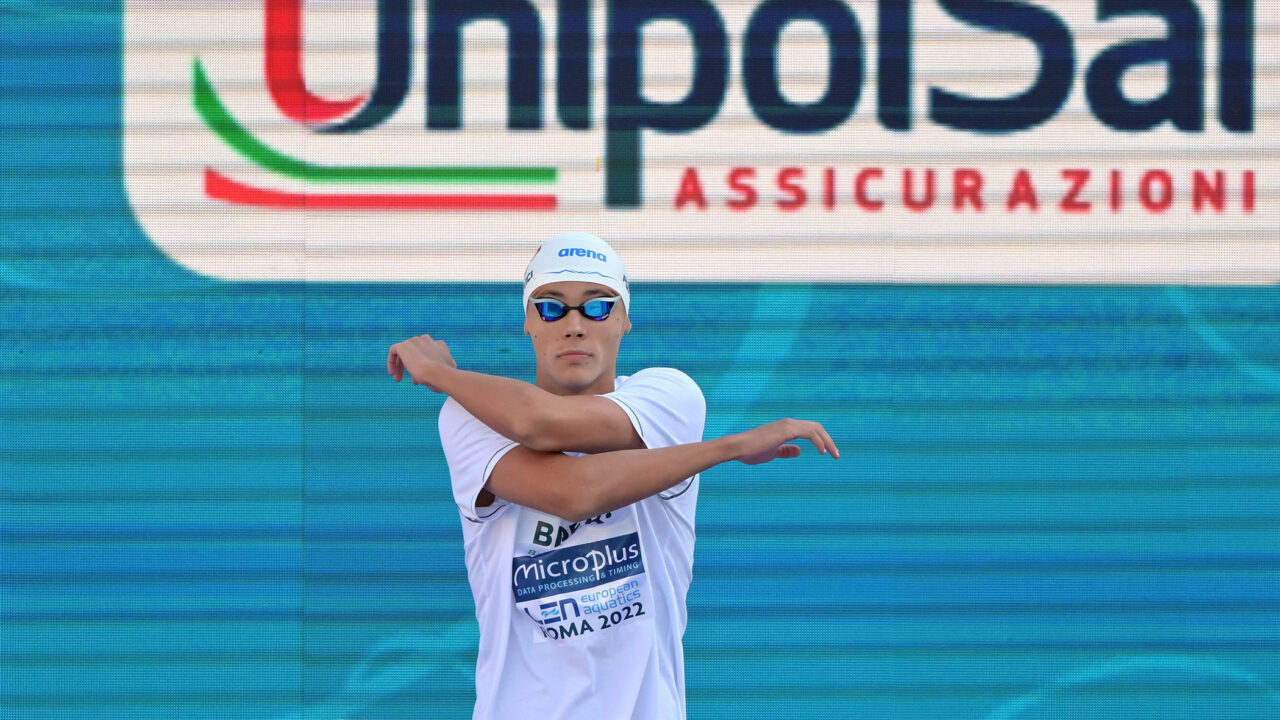 “It is not often that I am thinking about the past, but I'm always thinking of the future,” Popovici said. “The future is imagination, and the past is gone." Archive photo via Fabio Cetti

Romanian star David Popovici and Peruvian standout Alexia Sotomayor met with the media on Monday ahead of the 2022 World Junior Swimming Championships beginning Tuesday in Lima.

Popovici offered insight into his mentality following his 100 free world record at the European Championships earlier this month. He continued to display an impressive amount of maturity as a 17-year-old under a bright spotlight, discussing how he’s entering his last junior meet without any expectations — a strategy that worked out well for him at Euros.

“For this meet, like most events, I never set any expectations,” said Popovici, the top seed in the 100 and 200 freestyle. “The goals are to simply have fun, enjoy, swim fast and to make the most of the great atmosphere. With your support and cheers, that is going to help each of us to become the best version of ourselves, by swimming fast and having fun.

“I think I may have done everything I wanted to do as a junior swimmer, but let’s just see what we can do and maybe we can surprise ourselves this week.”

Popovici also provided some words of wisdom about focusing on the future instead of dwelling on the past.

“It is not often that I am thinking about the past, but I am always thinking of the future,” Popovici said. “The future is imagination, and the past is gone. My performance in Rome was the fruits of our hard work.  We don’t focus on the times but we focus on our potential to swim faster.

“The future is step by step and built brick by brick,” he added. “There are many technical aspects that require our attention and they are a lot of work. Occasionally we can do something very nice. Breaking a world record is cool, but the potential to be faster has no limits. So why would we put a limit on ourselves when we know that we can achieve a lot?”

Popovici credited the connection with his coach, Adrian Radulescu, for contributing to his meteoric rise this summer.

“The chemistry between a coach and an athlete is a very important one,” Popovici said. “The one-on-one connection is very important. You have heard the expression: ‘If it ain’t broke, why try to fix it?’”

Sotomayor reflected on how the hometown support should motivate her this week, but also comes with some added pressure.

“I have many friends and family who will be watching this week,” Sotomayor said. “I hope that people will come hoping to see me and my teammates swim, and perhaps we will win something in our home pool. My teammates and so many of the rest of the athletes are more than prepared for this event and we all appreciate your support; it surely motivates me.

“An athlete has a very important responsibility when competing in your hometown, and to race against so many great swimmers is a great opportunity,” she added. “Everyone here has goals and if you dream it you can make it. Everyone is going to prove what they are made of at the world juniors this week. The emotions and the adrenaline that all sports bring is something that Peruvian swimmers embrace. As junior swimmers, we are always learning new things and setting new goals for ourselves that will help us in our future.”

FINA administrators also spoke to the press on Monday. Alia Atkinson, a retired Jamaican Olympian who now serves as a bureau member and chair of the FINA Athletes’ Committee, said World Juniors inspires the next generation of swimming greats.

“It is spectacular to be here and to witness the events that FINA inaugurated in 2006,” Atkinson said. “Young athletes are afforded early exposure to international competition that will advance their maturity and enhance their education of the sport. It’s tremendous to see Alexia and David and many others of their age vying for a spot at the top of the podium. This will inspire many others in their own country or across their continent to say ‘I can do it!’”

FINA treasurer Dale Neuburger added that many of the athletes competing this week will likely be future Olympians at Paris 2024 and LA 2028.

“Fans can expect to witness great competition across all of the Olympic events and the enthusiasm from the audience will ensure the success of these athletes as they transition from national and continental competition to the world’s stage of FINA and Olympic events,” Neuburger said. “You will see many of these swimmers at the 2024 Paris and the 2028 Los Angeles Olympic Games.”

Popovici’s mental edge is just on another level. What other teenager turns to Plato and Aristotle for guidance.

But I think what really separates him is a complete lack of fear. Sprinters fear the last 25 of a 100, 200 freestylers are scared of going out too fast. Chlorinedaddy embraces the challenge.

How many times have we seen swimmers choose not to enter their “tougher” events? When was the last time we saw the 100m world record holder compete in the 400m freestyle at an international championship? If Dressel or Chalmers had entered the 400 the swimming world would’ve imploded.

13
-2
Reply
Mojo
Reply to  Outside Smoke

That’s why he will be the world champion in 400 free too. To be noted.

Popovici has both Homer’s poetic intellect and Poseidon’s mastery of water.
Popovici has pleased the mortals.