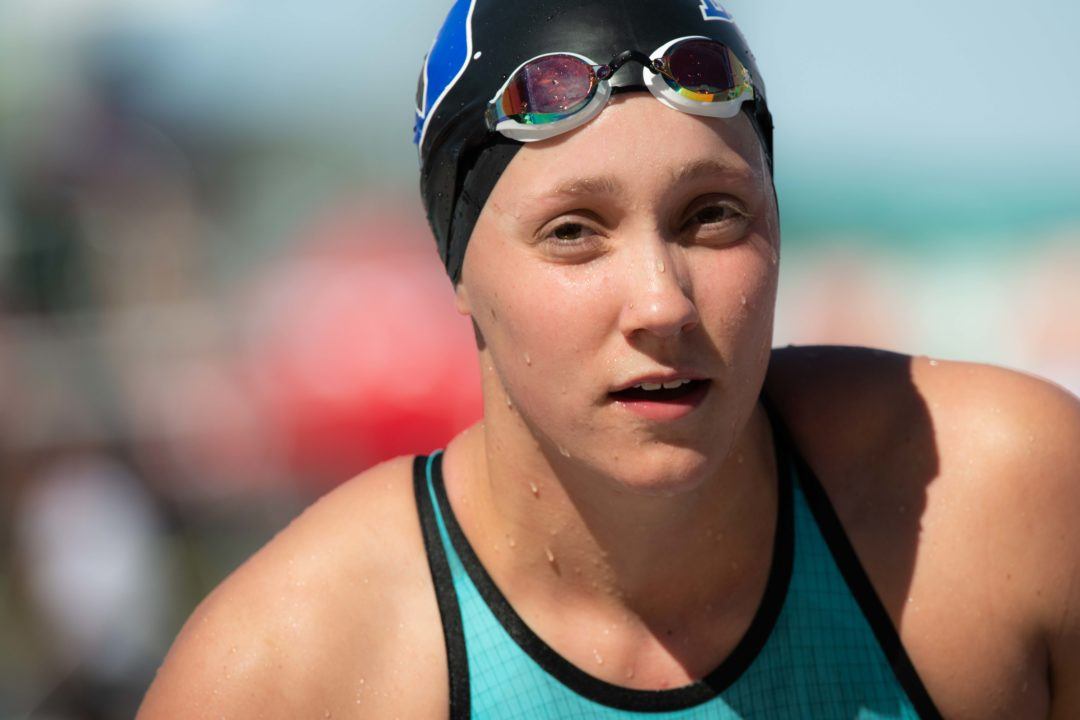 Alyssa Marsh broke her own Duke record in the 100 free this morning. Archive photo via Mike Lewis/Ola Vista Photography

After breaking 59.0 for the first time yesterday in the 100 breast, Tennessee sophomore Nikol Popov was close to a best in the longer breast event, the 200.

Popov, who came to UT from California, swam to a time of 2:09.48 this morning. She was the only swimmer under 2:12, as she led a Vol 1-2-3-4 sweep as they’ll take up the middle four lanes in the A final tonight. Popov had only broken 2:10 three times prior to this swim, with her best being a 2:08.92 from March of 2016. She was only 2:14.69 at this meet last year, and 2:16.40 at her first SEC Championships this past winter. If anything, Popov is showing that she’s back on form and will be a crucial part of Tennessee’s post-season campaign this year.

Tennessee ruled the 200 back on the men’s and women’s sides. Sinclair Larson, a freshman, put down a 1:54.24, not far off of a best and her 2nd-best swim of all time. On the men’s side, Joey Reilman posted a likely NCAA invite time, taking the top seed into tonight with a 1:40.59.

The Vol men did their part, too, taking top seeds in all four event prelims this morning. After Reilman’s 200 back, their top sprinter, Kyle Decoursey, swam to a 42.87 in the 100 free. That was the only sub-43 performance, though another Vol, Alec Connolly, was close in 43.03.

Matthew Dunphy, the 100 breast winner last night, took to the 200 this morning and dominated the field. He swam a 1:54.90, a 4.5-second drop from his seed time, to finish almost three seconds ahead of the next-best swimmer. Finally, in the 200 fly, Marc Hinawi clocked a 1:45.49 to lock up Tennessee’s fourth-straight top seed for tonight’s finals.

Great job Alyssa! CONGRATULATIONS. I know your Dad is proud!

I saw Popov in the title and came here expecting some relationship to the great Alex. Then I saw it was a female breaststroke. Solid time though