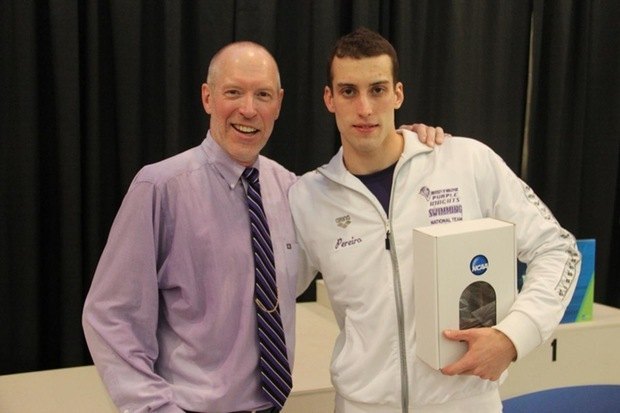 Pfeiffer University has named Brad Flood to lead the Falcon women’s swimming program. Flood comes to Pfeiffer after serving as the head coach at the University of Bridgeport in Bridgeport, Conn., since 2003. Current photo via Pfeiffer Athletics

Flood comes to Pfeiffer after serving as the head coach at the University of Bridgeport in Bridgeport, Conn. Flood started the women’s program in 2003 and the men’s program in 2009. While in charge of the Knights, he coached Oscar Pereiro to four-consecutive NCAA Division II titles in the 100-yard backstroke. In total, he helped guide three swimmers to eight individual NCAA titles, three relay teams to NCAA titles and had two athletes set NCAA records.

He also coached 14 different female athletes to 16 individual and eight relay All-America designations over his tenure.

During his collegiate career, Flood is the only coach in NCAA history to have coached a four-time NCAA men’s Individual event champion at both the NCAA Division I and Division II levels

In addition to his collegiate coaching experience, Flood served as the head coach with the Polish National Swimming Federation from 1992-2005. Over that span, Flood coached Rafal Szukala to the silver medal in the 100m butterfly in the 1992 Barcelona Olympics.

Flood has also had prior coaching experience at Central Connecticut State, Clemson, Texas A&M and Iowa.

“I am excited to begin working with the women on the 2018-19 team,” said Flood. “I’m excited to begin the process of building a program that will represent Pfeiffer University with great Falcon pride and the pursuit of excellence in all aspects of the student-athlete experience that will become a trademark of the program.”

“We as an administration are excited to have Brad join our team,” said athletic director Danielle Lafferty. “His collegiate and previous coaching experiences are exactly what we need to continue to grow our women’s swimming program.”

She added, “His coaching philosophy can add invaluable experience to our athletics department.”

Congratulations to Coach Flood. He is one of the greatest swimming minds in history. A genius, prodigy and alchemist without equal.

What happened to Brideports swim team? They have basically 12 guys and like 8 girls on the roster?

CONGRATS Coach Flood. You did great things for my son at CCSU and then helping him earn a GA spot @ Western Illinois. You are back where you belong……..on deck. Good luck in your new role. I see a lot of good things happening at Pfeiffer