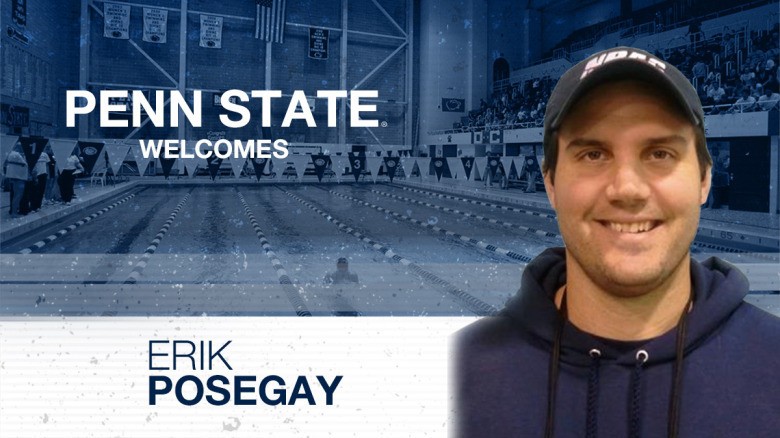 Erik Posegay, who took over as head coach and CEO of the North Baltimore Aquatic Club (NBAC) when Michael Phelps... Archive photo via Penn State Athletics

Erik Posegay, who took over as head coach and CEO of the North Baltimore Aquatic Club (NBAC) when Michael Phelps and Bob Bowman left for Arizona, has been named an assistant coach at Penn State University.

Posegay spent 4 years as an assistant with NBAC before being promoted last summer to the role of head coach. He has served as a women’s assistant coach for three different American international squads: the 2015 Open Water World Championships, 2013 Duel in the Pool and 2010 Junior Pan Pacific Championships.

Before his time in Baltimore, Posegay was the head coach at Parlkand High School and the Parkland Aquatic Club. One of his last accomplishments there was coaching G Ryan to the 2011 USA Swimming National Championships. The pair moved to join NBAC shortly thereafter, where Posegay continued to focus on distance swimmers.

Penn State opens their season on October 6th when they host Towson. That meet is expected to mark the return of Shane Ryan to the Penn State program. He spent last season on a redshirt while establishing residency in Ireland to compete for their Olympic Team.

Posegay, a native of Allentown, Pennsylvania, had served at the NBAC since August 2011. He was initially hired as an assistant coach under Bob Bowman, and he was promoted to head coach in June 2015 when Bowman departed to become the head coach at Arizona State. Bowman and the North Baltimore Aquatic Club are most widely known for its most decorated pupil, 28-time Olympic medalist Michael Phelps.

“I want to thank Athletic Director Sandy Barbour, Assistant AD Jenn James, and Coach Tim Murphy and his staff and team for welcoming me into the Penn State family,” said Posegay. “It is an honor to coach at a place that has meant so much to swimming in this state for so many years. I am humbled to have the opportunity to work with this team and I look forward to helping this program achieve the goals we have in front of us for this year and beyond.”

Posegay will primarily work with the distance, IM and stroke events.

“We are excited to welcome Erik, his wife Stevie, and daughter Avery to the Penn State swimming and diving family,” said Murphy. “Erik’s coaching experiences bring a unique and dynamic addition to our staff that our athletes and program will benefit from for years to come.”

As the head coach of the NBAC, Posegay was the lead coach for the Olympic group and two high school groups. As an assistant coach, he assisted the professional group and helped Bowman coach athletes including Michael Phelps, Allison Schmitt, Conor Dwyer, Matt McLean, Yannick Agnel, Ous Mellouli and Chase Kalisz.

For the 2016 Rio games, four of the athletes Posegay tutored competed, and he also served as Macedonia’s head coach. He has also coached Paralympians, including Jessica Long, the most decorated Paralympic swimmer of all-time and a world and American record holder, and Rebecca Meyers, another world and American record holder and the winner of the 2015 ESPY for Paralympic Athlete of the Year. Both have earned medals at the 2016 Paralympic Games in Rio.

During Posegay’s tenure at the NBAC, it was recognized each year as a USA Swimming Gold Medal Club and ranked among the Top 10 in the nation. In 2012, he helped the North Baltimore women win the USA Junior National Team title. He was also a three-time Maryland Senior Coach of the Year.

Additionally, Posegay has served three appointments with USA Swimming, serving as an assistant women’s coach for the 2015 Open Water World Championships, 2013 Duel in the Pool and 2010 Junior Pan Pacific Championships. He was the 2015 Glenn S. Hummer Award Winner for his work on the open water staff.

Posegay was also an assistant coach for the French Federation at the 2014 European Championships.

Prior to joining the NBAC, Posegay was the head coach at Parkland High School and the Parkland Aquatic Club in Allentown from August 2005 to 2011. In 2006, he guided the Parkland H.S. women to the AAA Pennsylvania State Championship and was named the Pennsylvania Women’s Coach of the Year. The school added him to its Hall of Fame for his coaching work in 2013.

In 2010, the Parkland Aquatic Club women placed third at USA Junior Nationals. Posegay took PAAC from a high school feeder program and turned it into the top ranked USA swimming club in Pennsylvania for five consecutive years. The club nearly doubled in size and was named a Silver Medal Club for 2011. He coached five different swimmers to Olympic trial qualifying times and three competed for the U.S. on international teams.  Posegay was named the Middle Atlantic Age Group Coach of the Year from 2008-10.

He broke into the coaching ranks as an assistant at Emmaus Aquatic Club and Emmaus High School from August 2002-2005.

Posegay graduated from Albright College in 2002 with a Bachelor of Arts in political science. He is married to Stevie and has a young daughter, Avery.

Great hire for Penn State U.

Congrats Erik! Your combination of discipline and compassion will do nothing but augment the efforts of dedicated swimmers. Looking forward to seeing what kind of top-notch program you and Coach Murphy develop.

Is anyone else intrigued by this move? It would seem the NBAC job was one of the top club coaching jobs in the country to go to an assistant coach for a college team?

NBAC is going through some troubles…that’s all.

NBAC hasn’t developed many of their own swimmers to the elite level since Paul Yetter left. 90% of the successes have been athletes that moved in to train with Michael….some stayed and some left but probably hurt the development of NBAC age groupers. Just my thoughts.

I agree & PSU has a terrible, old aquatic facility!!!

I’m willing to bet he took a pay cut, but he is probably relieved to just focus on coaching swimming again.

That’s what everyone here at NBAC is wondering…

He has a family to worry about now. Club coaches don’t receive benefits like the college coaches. With a wife and young daughter, medical benefits are now more important than if he was a single man.

Club coaches do receive benefits, especially for the CEO in a Gold Medal Club.

This isn’t correct on the whole