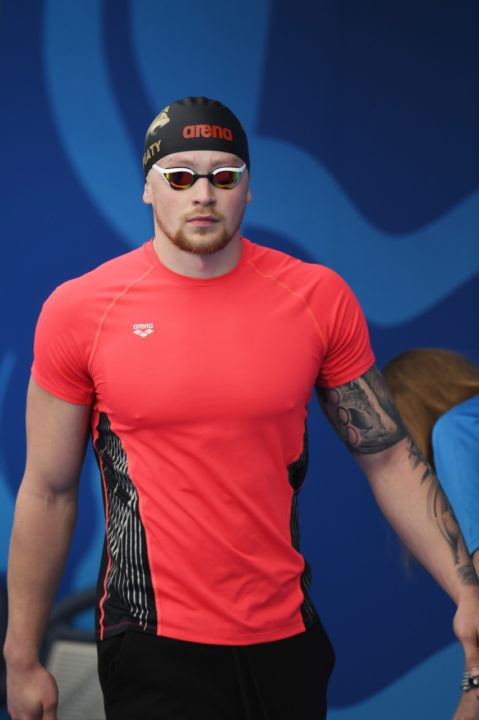 While not a university student, Olympic and World champion Adam Peaty was still able to compete in the heats of the 2019 British Universities & Colleges (BUCS) Long Course Championships today in Sheffield. Archive photo via Stephane Kempinaire / KMSP / DPPI

While not a university student, Olympic and World champion Adam Peaty was still able to compete in the heats of the 2019 British Universities & Colleges (BUCS) Long Course Championships today in Sheffield.

Racing in the men’s 50m breaststroke prelims, Peaty put down a monster mark of 26.74 to beat the AM field by more than a second and take his familiar spot atop the world rankings for the event this season.

His outing registers among the top 25 performances of all-time, with Peaty owning the top 11, including his lifetime best and World Record of 25.95 from the 2017 World Championships. Peaty’s mark today was just .12 off of the 26.62 he logged for silver behind now-retired South African Cameron van der Burgh at last year’s Commonwealth Games.

Peaty was also slated to race the 200m breast in the afternoon prelims session of the BUCS meet, but wound up not swimming. The 100m breaststroke event takes place tomorrow in Sheffield.

The 24-year-old Loughborough elite swimmer has recently arrived back in his home nation of Great Britain after a series of weeks down under in Australia. He competed at the Miami Super Challenge last month in Queensland where he threw down a sub-1:00 100m breast in 59.72 to kick-off his 2019.

He did swim the 200 heat. He went out max, did a 60.1 and then just stopped. Didn’t show much class unfortunately.

Apparently scoreboards at 100m were out of timing. He has a lot more class than most swimmers I would say!