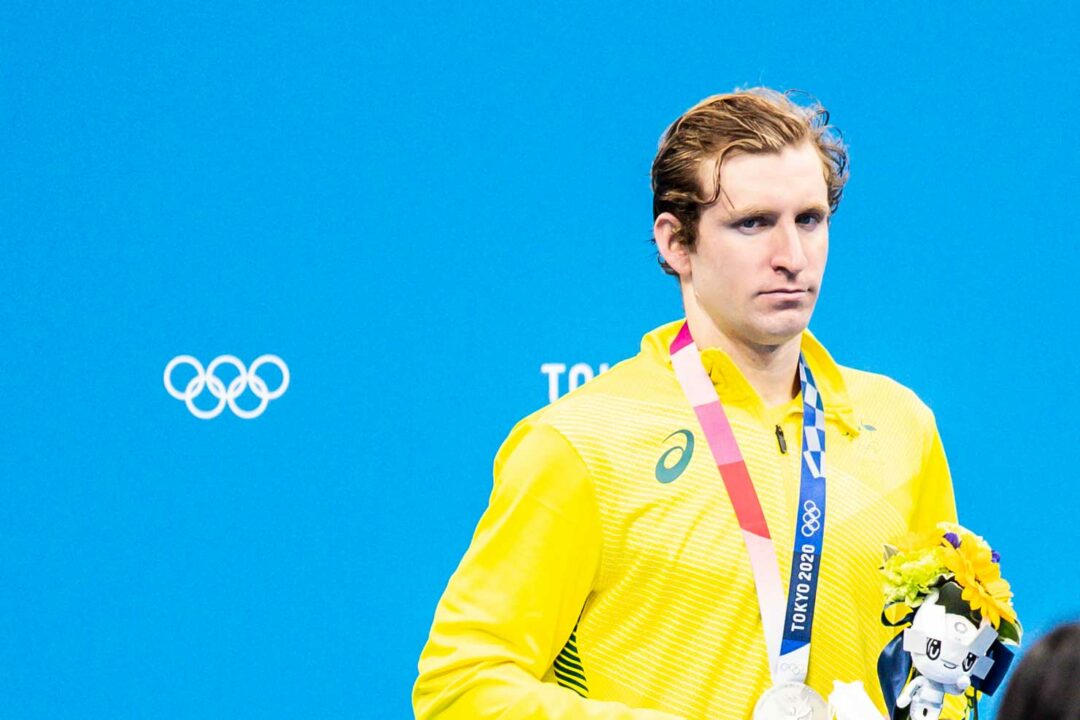 Jack McLoughlin, the man who took silver in the 400m free in Tokyo, is absent from the Australian Swimming Championships entry list. Archive photo via Jack Spitser/Spitser Photography

We revealed earlier today that the psych sheets for the 2022 Australian Swimming Championships have indeed been published. We noted some of the key entries for the high-profile athletes, while also highlighting a few of the absences.

Some of the missing athletes we already knew about, such as Cate Campbell, with the multi-Olympic medalist opting out of both the World Championships and Commonwealth Games.

Emma McKeon, Australia’s most decorated Olympian, is also not racing at these Championships, having opted out of the World Championships as well.

But in the column of an unexpected absence is Jack McLoughlin, the man who took silver in the men’s 400m free at the 2020 Olympic Games. As a correction to what was previously published, McLoughlin, as with other Tokyo medalists, is pre-qualified for the Commonwealth Games and not the World Championships.

Additionally, breaststrokers Daniel Cave and Jessica Hansen are all missing from the entries. Cave was not on the Olympic team while Hansen placed 20th in the women’s 100m breaststroke in Tokyo.

Anyone know what’s happened to promising breastroker George Harley ? He was right up there with ZSC and Wilson in the 200 and has since disappeared from swimming

Taking the four best times of the Aussie men in that event they are exactly 2 second slower than USA’s top 4 times this year. 2 seconds isn’t a lot over 800m. Also I would expect Southam to drop some time, Mack wasn’t on form last year so he certainly has potential to be a lot faster.

Actually I did add up wrong. I missed Tommy Neill because he is listed in the age group swimmers instead of Open but is still eligible for worlds. Using his time instead, Australia is 0.9 behind USA and hasn’t had trials yet. Not as bad as it first seemed.

Tending to agree with Verram on this.

RUS’s enforced absence does change the likely podium equation; albeit GBR still remaining top of the heap. USA should re-enter the picture and ITA not without a chance but, whilst clearly weakened by the absence of Chalmers and Graham, AUS still looks near par.

We will, of course, know more in a couple of weeks but at this point I still have them as the only AUS male relay with conceivable medal hopes.

The medley relay has a chance at a bronze medal but only if all the stars align. I suppose it’s probably not a realistic medal chance.

But if Larkin can get back close to his best (52.11 PB), ZSC can improve his 100 breast (he’s prime age to keep improving and was a 58.6 in Tokyo which isn’t terrible but certainly isn’t an asset), Matt Temple can swim his best (50.2 in the MMR in Tokyo) and someone can step up in free to at least give us a 47 mid (Southam? That’s only a second faster than his flat start at an age group meet last month), bronze is a possibility?

Chalmers has been the “get out of jail free” card for the 4x100free and podium; without him they’re scrambling to ensure a finals berth.

As to your 4xMED prognostication; am happy to accede to potentially seeing some 100 improvement from ZSC and whilst you may be a tad optimistic that Southam may deliver this soon; its not pie in the sky.

My bearishness with regards to this relay boils down to one factor; namely Larkin and the harsh reality that he’s been completely “out to lunch” as regards relay performances since 2015 Worlds …. whatever he may’ve swam individually in the same meets.

Quite simply, his lack of performance plus relative lack of competitiveness on BRS invariably leaves this… Read more »

Yeah you’re probably right. We haven’t had a competitive male 100 breast since Sprenger. And we really need someone to replace Larkin but no one seems to be stepping up.

It’s a little unfair against Cooper to say no one is stepping up. Hopefully he can keep progressing this year

Yeah that’s true actually. I guess I had kind of written him off because he initially missed the qualifying time at Olympic trials and then came 12th. Actually on second thought how was he on the team if he didn’t make the qualifying time in any event? Do we automatically send our backup in the stroke 100s because of the medley relay?

Anyway, you’re right, he is still very young. He has been 54.20 this year which isn’t bad in-season. As an 18 year old I would hope he has some more time drops in him. Trials will be interesting!

He met the FINA A time and we needed a second backstroker and his time was still good enough for a heats relay. I think he exceeded expectations last year dropping so much time and setting an age record.

Incerti already went 47.50 in Tokyo but I’ll still be very surprised if the medley relay podium isn’t a repeat of Tokyo.

47.50 is a very respectable relay split but its far from a gamechanger; even Chalmers (who IS a truly great 100free relay performer) couldn’t save the show in Tokyo. Without him …..

To reply to James, there is certainly no ready-made substitute/better option for Larkin however I’m willing to give this year at least to see if Cooper (for one) can make some forward progress. Making semis last year was at least a respectable outing.

I was just mentioning it because they said Southam might go 47.50.

Hodges is certainly on the start list that I can see for both 50/100 BRS. Your other absentees look correct.

McLoughlin hasn’t been seen in competition this year, to the best of my knowledge/observation. Given he is aspiring to become an engineer; it may well be the case that he is using this year to give priority to his studies especially given he is already 27.

I’ve seen Jack recently. Just in passing, I don’t know him well or anything. He definitely didn’t look like he had been training too much.

Not sure what one looks like when they are training?!?!?

It took me much longer than it should have to realise that the entries are listed alphabetically.

As with other Tokyo medalists, McLoughlin has been pre-qualified for the World Championships in Budapest, therefore, that very well may be the reason he’s not racing next week.

Olympic medalists are only pre-qualified for Commonwealth Games, not for worlds.

Obviously that includes relay swimmers who medalled in Tokyo

Only individual medalists are pre-qualified.