Olympic Champion Kosuke Hagino: ‘The Extra Year Of Preparation Is A Gift’ 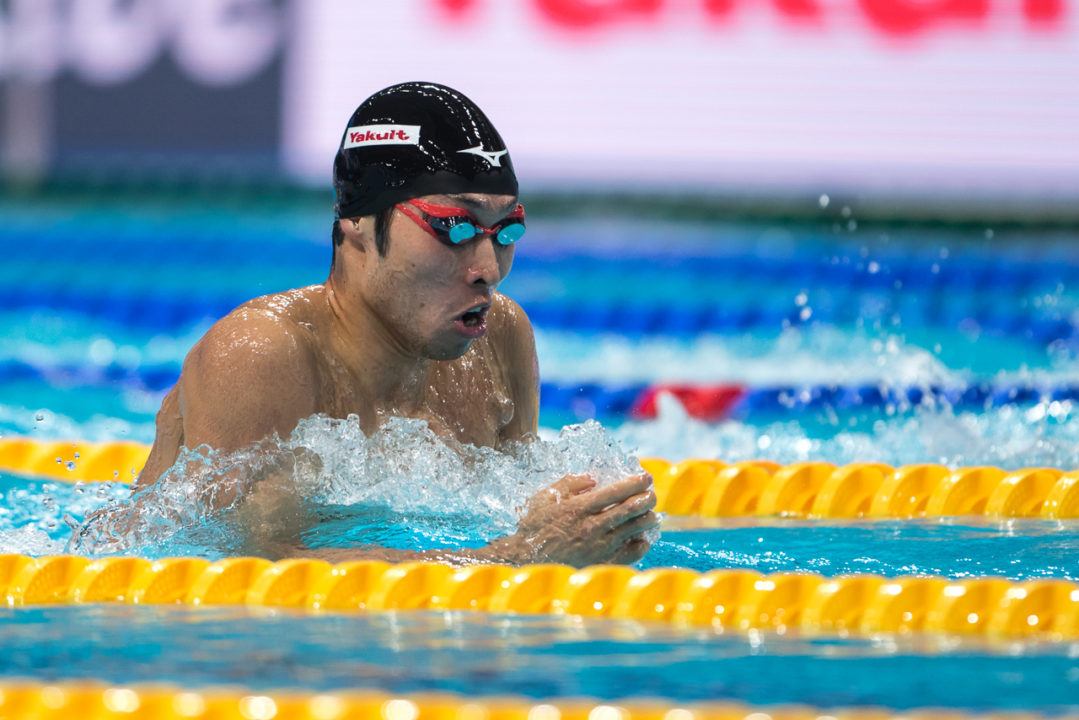 New father Kosuke Hagino is readjusting his perspective with any extra year of training in the quest of defending his 400m IM Olympic gold medal. Archive photo via Peter Sukenik/www.petersukenik.com

Reigning 400m IM Olympic champion Kosuke Hagino has been relatively quiet over the last year, although his journey may indeed wind up peaking at just the right time.

While his compatriot Daiya Seto was breaking world records and taking names, 25-year-old Hagino was on his road to recovery from mental and physical burnout. The burnout culminated with Hagino’s decision to forego the Japanese national team training camp in Spain in the spring of 2019, an important tollgate heading into that year’s Japan Swim and Japan Open.

Hagino ultimately opted out of both those competitions, forfeiting any chance of qualifying for the 2019 FINA World Aquatic Championships.

When Hagino announced his withdrawal from the Japan Swim, the Bridgestone swimmer stated, “I’ve been unable to achieve the results I had hoped for since the 2017 season. “As the gap between my targets and reality has widened, it has become harder for me to maintain my motivation.”

You can catch up on Hagino’s rocky roads of 2018 and 2019 through our coverage here.

Since that time, however, the versatile athlete has been steadily making improvements to build confidence, including snagging a bronze medal at the Tokyo stop of the FINA World Cup last August after a 5-month hiatus.

In November, Hagino sneaked onto Japan’s national team at the 11th hour by way of his 200m IM victory at the Japanese Amateur Championships. That was after already having clocked his fastest 200m backstroke effort in 2 years earlier at the same meet.

On a personal level, Hagino got married and welcomed his first child into the world last winter. Entering 2020, Hagino said this past January, “I think it’s going to be a big year, and I want to make it the best.”

However, the coronavirus pandemic threw a wrench into any immediate comeback plans on an Olympic level, with the Tokyo-hosted Games ultimately being pushed back to July 2021. Or did it?

“If the Olympics were coming this year, I think it would have been tough,” Hagino told Asian media this week after having time to reflect. (Sanspo)

With more time on his hands, the new dad is revisiting his technique, focusing on mechanics and details in order to get back to form against the likes of rivals such as aforementioned Seto, Americans Chase Kalisz, and Jay Litherland, and even newcomer Lewis Clareburt of New Zealand.

“My technique had become messy. I’m definitely better even now in this area than during the time prior to the Olympic postponement.

“Before then, I felt like I was running out of time. But, since I don’t have any immediate meets to race at right now, I can think about my swimming slowly and deliberately.”

“That’s why I want to cherish this gift of another year.”

Translation: “I was mad unfit but just blasting through on my incredible natural ability. Knocking out some quality work now so should be comfortably under 4:10 with only one season’s proper training behind me because, you know, talent”.

Even though I dislike your comment I’ll have to agree with it… Talent does play a huge role on most of elite swimmers.

Well what the heck is talent anyway?

He’s certainly talented in a lot of ways, but I really can’t take the “coasting on talent” argument seriously when it comes to him. He’s 5’9″ and 160 lbs. When he goes 1:56 in the 200 IM it is significantly more impressive than when a 6’4″+ swimmer does the same. There’s a level of finesse required when you’re that much smaller, especially in long course. We’re talking about over a year of serious training, so I don’t see why he shouldn’t be able to approach peak form as long as he didn’t totally let himself go during his off time.

this disdainfully pessimistic comment doesn’t really target him; but rather all great swimmers and athletes. ya, cats out of the bag- great athletes are talented..

Good luck! The extra year will benefit pretty much all swimmers on a comeback. I can’t wait to see what he will do!