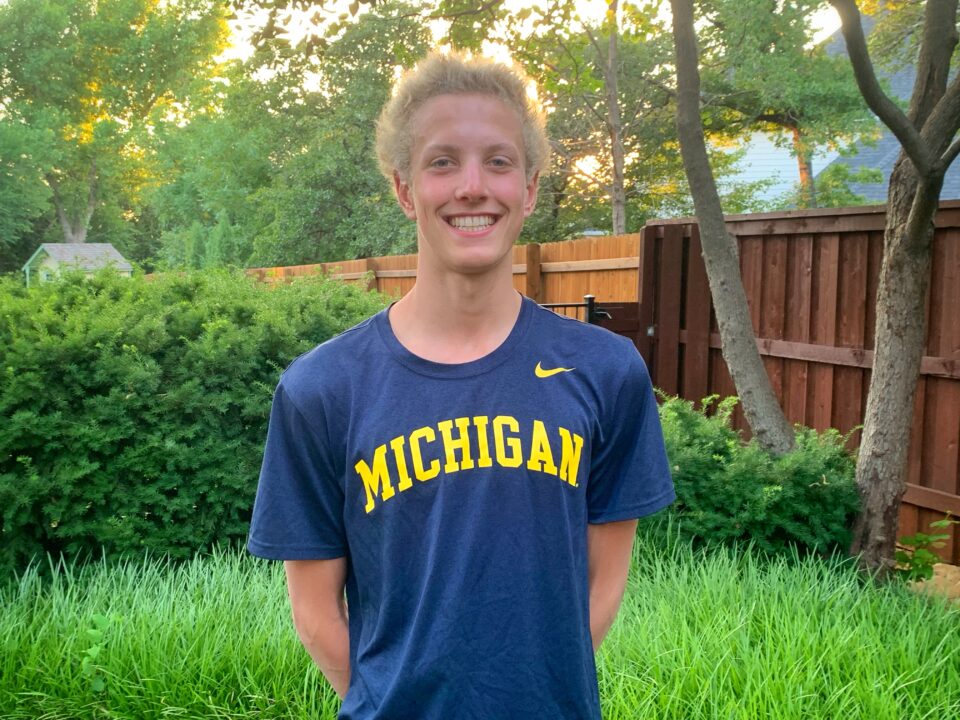 The University of Michigan secured a verbal commitment from Summer Junior Nationals finalist Ryan Healy for the 2023-24 season. Current photo via Ryan Healy

U.S. Open qualifier Ryan Healy of Edmond, OK has announced his decision to swim for the University of Michigan beginning in the 2023-24 season. Healy swims club with the King Marlin Swim Club and he is entering his senior year at Edmond North High School.

I’m super excited to announce my verbal commitment to the University of Michigan. Both the team and the coaching staff are amazing, and I’m excited to join them. Thank you to my teammates, parents, and coaches for supporting me and pushing me to be my best. Thank you to Michigan for giving me this awesome opportunity. Go Blue!

In February, Healy became a two-time individual Oklahoma 6A State champion. He swam in the 200 IM and 500 free, smashing his competition en route to winning his gold medals. He touched first by 3.5 seconds in the 200 IM, going up a best time of 1:49.90. He won the 500 free at the state meet by 18 seconds.

Healy took home an additional gold medal as the anchor on Edmond North’s 400 free relay. He swam the backstroke lead-off of the 200 medley relay, earning a silver medal. He is a 2021 USA Swimming Scholastic All-American and at the end of last season was named 2022 Boys Swimmer of the Year at The Oklahoman’s OKC Metro High School Sports Awards.

Healy will travel to Ann Arbor to join the University of Michigan’s men’s team in the fall of 2023. He will be joined by Jaeddan Gamilla, Colin Greer, Josean Massucco, Jaden Ficklen, and Ethan Schwab as a member of the class of 2027.

The Wolverines are in rebuilding mode after several transfers out of the program last season, including high profile swimmers and Olympians. Michigan has gone far-and-wide looking for reinforcements, and in this class of six so far, only one swimmer (Schwab) is from the state of Michigan.

Besides Healy, the team has picked up two from California (Ficklen, Geer), one from nearby Illinois (Gamilla), and one from Tennessee (Massucco).

The Wolverines will need that versatilty to fill holes in their lineup. They won back-to-back Big Ten titles in 2020 and 2021, but slid to 3rd place in 2022. That 3rd place finish was about 350 points behind runners-up Ohio State and almost 450 points behind the champion Indiana Hoosiers.

why ditch the other B1G school?

Ryan is a wonderful young man and great swimmer. Swimming is in his genes as his entire family mother, father, brother, and sister were/are all swimmers. He has a great future ahead for Michigan. Helia Monster!!!!!

He looks like he’s going to be an electrical engineer. Zap!