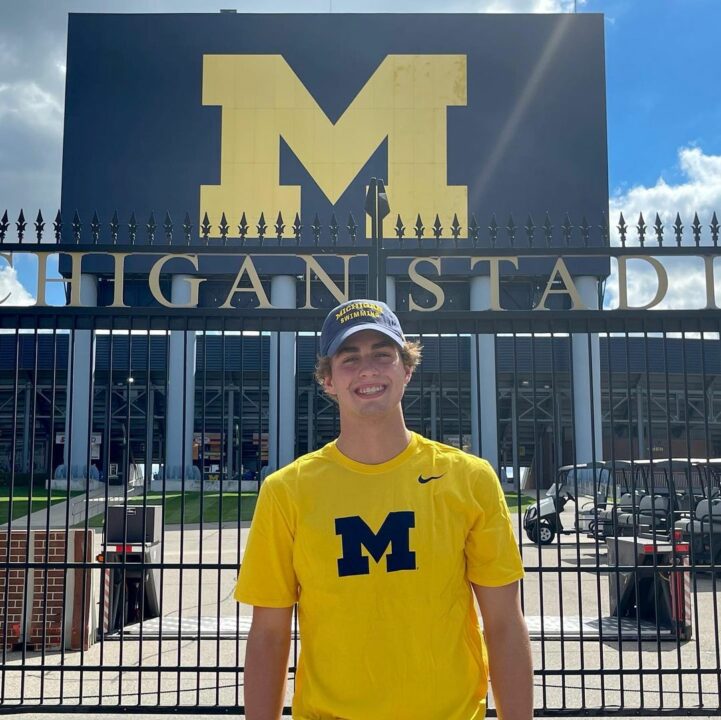 Ethan Schwab has verbally committed to the University of Michigan for fall 2023 - the first swimmer nationally to announce his commitment publicly.

iNspire Swim Team’s Nate Germonprez, our #3 recruit in the class of 2023, is the first public commitment to the Texas Longhorns’ class of 2027.

Sprinter Mia McBride will travel north from Alabama to West Virginia as she has announced her commitment to Marshall University.

Ethan Schwab from Bloomfield Hills, Michigan has become the first swimmer in the high school class of 2023 to announce his college destination.

Schwab will stay in-state, committing to the Michigan Wolverines.

A rising junior at Cranbrook Kingswood School in suburban Detroit, Schwab was the Michigan High School Division 3 runner-up in the 500 free and 100 breaststroke last season with times of 4:35.14 and 55.46, respectively. While Division 3 includes the state’s smallest high schools, Schwab’s time in the 100 breaststroke would have placed 2nd at the Division 1 and Division 2 meets as well.

His effort was part of a 3rd-place team performance for Cranbrook Kingswood. Schwab’s 200 medley relay split of 24.65, on Kingswood’s winning group, was the second-fastest in the whole state.

Schwab will have some work to do to fill out his collegiate lineup and develop his second and third events. His respectable 4:34 in the 500 free indicates that he has some untapped versatility with still two years before arriving in college.

Even as a sprint breaststroker though, he’ll be a crucial addition for the Wolverines. The Michigan men will have one of the best breaststroke groups in the country this season, led by Will Chan (50.95 last year), but the top of that group is all seniors – AJ Bornstein and Mason Hunter included.

They’ve got good freshmen coming in, with Cameron Luarde (55.0) and Brendan Fitzpatrick (1:02 long course), plus Ozan Kalafat in the class of 2022 (55.5), but the Wolverines still need some help to rebuild that group.

Schwab, who trains at the Birmingham Family YMCA, finished 2nd in the 100 breatstroke and 200 breaststroke over the summer at the long course NCSA Summer Championship meet. Both swims were best time of 1:04.84 and 2:18.49, respectively. That long course drop in the 200 breast of more than 8 seconds, which followed a similar drop of about 8 seconds in April in the 200 yard breast, indicate that he is headed for a breakout as a junior in the longer race.

While some schools have teased commitments (including Kentucky, who say they have three already verbally committed in their class of 2023 already), Schwab is the first that SwimSwam has identified as a public commitment.

Michigan had a very early commitment last year too – Lucas Hodgson announced his commitment on July 27, one of the first in the class of 2022 to do so.

While it seems as though commitments are coming earlier and earlier each season, this is actually a relatively late start to the recruiting season. By mid-September last year, there were well over a dozen commitments announced nationally.

Because of the COVID restrictions on on-campus visits over the last year, it’s likely that many in the class of 2023 haven’t taken any visits yet. While this impacted the class of 2022 as well, many of those athletes could have taken unofficial visits as sophomores prior to the pandemic, or last year as juniors as deadlines approached, but it appears as though the class of 2023 is taking their time and waiting for more chances to take official visits, which have restarted.

These commitments are so far just verbal, and aside from social pressures are not yet binding by either side. The first commitments won’t become binding until November of 2022, which is swimmers’ first opportunity to sign a National Letter of Intent.

Ethan Schwab got an assist from his dog in announcing his college decision.

Kevin Fogarty develops great swimmers and people at BBD…a super get for Michigan!