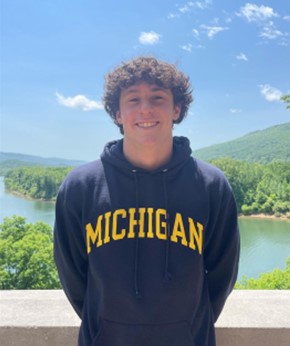 Josean Massucco, a Summer Juniors qualifier from Tennessee, has announced his verbal commitment to the University of Michigan for the 2023-24 school year. Currently, he trains and competes with the Baylor School and Baylor Swim Club out of Chattanooga, Tennessee. He also periodically competes under Loyola Athletic Club in Puerto Rico and Team Puerto Rico.

I am beyond excited to announce my verbal commitment to continue my academic and athletic career at the University of Michigan! I am extremely thankful for my family, coaches, and friends for helping me throughout this exciting process. Can’t wait to be a part of this amazing team! GO BLUE 〽️〽️

Massucco specializes in freestyle and butterfly, mainly excelling in the mid-distance and distance events. He holds the Summer Juniors qualifying time in the 500 and 1650 yard freestyles, and Winter Juniors times in the 1000 free and 100 fly. In the 200 fly, he is qualified for the 2022 Winter US Open.

Baylor won both the girls’ and boys’ TISCA Championships in 2022. Both the high school and club programs were led by head coach Dan Flack since 2005, until very recently, when they parted ways.

In 2022, Michigan finished 3rd at the Big 10 Championships behind Indiana and Ohio State. At NCAAs, they finished 22nd with 36 points. It has been a rocky few seasons for the Wolverines, including their lowest NCAA finish since 1986 and the outgoing transfer of two Olympians, among others. In spite of that, though, head coach Mike Bottom received a five year contract extension. He has been at Michigan since 2008.

Massucco will be joining fellow class of 2023 recruits Ryan Healy of Oklahoma and Michigan native Ethan Schwab in Ann Arbor.