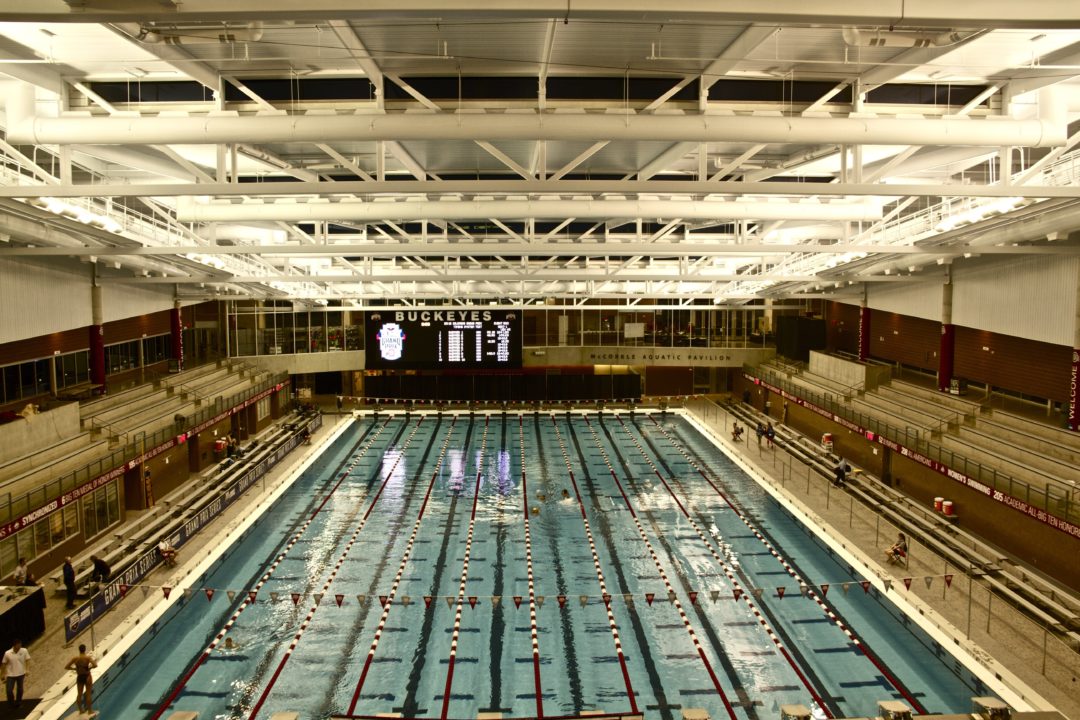 The Ohio State women’s swimming and diving team will look to continue building early momentum by hosting back-to-back duals vs. Cleveland State and Kenyon at McCorkle Aquatic Pavilion Thursday and Friday, respectively. Both meets are scheduled to begin at 6 p.m. Current photo via Gold Medal Media

The Ohio State women’s swimming and diving team will look to continue building early momentum by hosting back-to-back duals vs. Cleveland State and Kenyon at McCorkle Aquatic Pavilion Thursday and Friday, respectively. Both meets are scheduled to begin at 6 p.m.

The Buckeyes are coming off a strong opening to the season, capturing a team title at the Notre Dame Dennis Stark Relays (Oct. 10) and defeating Miami, Purdue, Cincinnati and Ohio last week to remain undefeated in dual-meet competition.

Order of Events
An order of events for the Thursday meet vs. CSU follows below; however, an updated format for the contest with Kenyon on Friday will be provided on OhioStateBuckeyes.com when available. The duals will operate with alternating men’s and women’s events.

Three Days, Four Wins
With a stacked opening to the 2014-15 campaign, the Buckeyes have already planted seeds for future success at the Big Ten and NCAA championship meets. Competing over the course of three consecutive days last week, Ohio State picked up four dual-meet victories.

The Buckeyes then returned to Columbus on Friday to host Purdue and Cincinnati. In a strong team performance, Ohio State defeated the Boilermakers by a score of 165-134 and the Bearcats, 238-60. Seven Buckeyes earned wins in multiple events. Senior diver Taylor Ford took first on the one- and three-meter apparatuses, while Li made her mark with first-place touches in the 200 medley relay, 100 freestyle, 50 freestyle and 400 freestyle relay.

On Saturday, the squad once again hit the road, this time to Athens, Ohio for a dual vs. the Bobcats. Continuing to showcase the team’s depth, 10 different Buckeyes captured individual event wins. Freshman diver Brittany Menninger earned top scores in the one- and three-meter competitions with scores of 280.05 and 282.83, respectively.

Buckeye Relays Roll in South Bend
Ohio State started its season off on a positive note, winning the 50th Annual Dennis Stark Relays at the University of Notre Dame on Oct. 10. With a total team score of 194, the Buckeyes outlasted the runner-up Fighting Irish, as well as squads representing Illinois State and Olivet Nazarene. In all, the Scarlet and Gray conquered nine of 10 races contested.

Scouting the Competition
The ties between the Buckeyes and Vikings run deep for Ohio State head coach Bill Dorenkott, who was a 15-time conference champion as a student-athlete at Cleveland State. Dorekott, as well as his wife Adrianne, competed on the Viking swim team before he transitioned to a coaching position at Ashland University following graduation. More recently, the Vikings are coming off wins vs. Niagara and Valparaiso, as well as a loss to Youngstown State last weekend.

The Kenyon Ladies opened their season by sweeping all eight swimming events at the Kenyon College Relays. At the meet, Kenyon set three meet records while capturing first-place standing in the team competition with 128 points. Junior Katie Kaestner was named the North Coast Athletic Conference’s Athlete of the Week after taking part in five event wins at the annual meet.

Embracing Eli
Eli Boda, a 13-year old from Columbus, Ohio, was adopted by the Buckeyes through the Friends of Jaclyn Foundation (FOJ), a non-profit, charitable organization formed in 2005 that aims to improve the quality of life for children with pediatric brain tumors and their families.

On May 19, 2014, Eli was diagnosed with a mass on his brain after a seizure caused him to unexpectedly collapse. Since then, a slew of radiation and chemotherapy has followed, taking a toll on both Eli and his loved ones.

Now, Eli has an extended family in the Buckeyes to lean on for support during challenging times. For more information on Eli, his family and his story, visit the following links: Friends of Jaclyn Foundation, Facebook, Caring Bridge and Go Fund Me.

Welcome Coach Wolfrum
In April, Jordan Wolfrum was named an assistant coach by head coach Bill Dorenkott. Wolfrum brings an extensive coaching background to the Buckeyes, including serving last season as a volunteer assistant coach at Stanford University. Under the guidance of Wolfrum, the Cardinals finished as the national runner-up, broke numerous school records and set an American and NCAA record in the 400 medley relay.

“I am so looking forward to joining the Buckeye family,” said Wolfrum. “I have immense respect for Coach Dorenkott as a coach and as a team leader. I am very excited to join him and bring my passion and excitement to the pool deck. I believe that together we can lead the Buckeyes to a Big Ten championship and NCAA honors.”

Captain Clary Leads Team USA
Lindsey Clary, a sophomore this season, was afforded the opportunity to lead the U.S. Junior National Team as it contended at the 2014 Junior Pan Pacific Championships, Aug. 27-31.

This summer marked the second consecutive in which Clary competed on the national level. She earned a spot on Team USA’s roster for Jr. Pan Pacs at the 2014 Open Water National Championships, where she finished 13th out of 47 competitors in only her second-ever open water race. At Jr. Pan Pacs, Clary earned sixth in the 10k open water event.

Busy Summer, Big Results
With the next Summer Olympics just two years away, the summer break from collegiate competition proved to be critical for the Buckeye swimmers as they strive to make their marks on the Rio Games in 2016.

Highlighting the summer, Buckeyes Michelle Williams and Samantha Cheverton shined for Team Canada at the Commonwealth Games in Glasgow, Scotland (July 24-29) and the Pan Pacific Championships in Gold Coast, Australia (Aug. 21-25). At the Commonwealth Games, both Buckeyes added to Canada’s medal total, with Cheverton contributing to the silver-medal winning 4×200 freestyle relay and Williams earning bronze alongside the 4×100 freestyle relay. The pair continued to gain recognition on the international level, competing in six events at Pan Pacs, which is regarded as one of the premier international meets of the year.

Ohio State was also well represented at the 2014 Phillips 66 National Championships, with a group of six current and former Buckeyes making waves at the national showcase. Clary continued to exhibit her development with a 36th-place finish in the 400 individual medley, while her teammates Alex Norris, Kaitlyn Ferrara, Ashley Vance and Amy Bopp also recorded Top-50 individual rankings.

Up Next
Ohio State will return to McCorkle Aquatic Pavilion, Nov. 7-8, for a face off against Denison and Princeton. On Friday, races are scheduled to start at 5 p.m., while action will resume Saturday at 10 a.m. The meet will be a final tune-up before the Buckeyes host the always competitive Ohio State Invitational, Nov. 21-23.