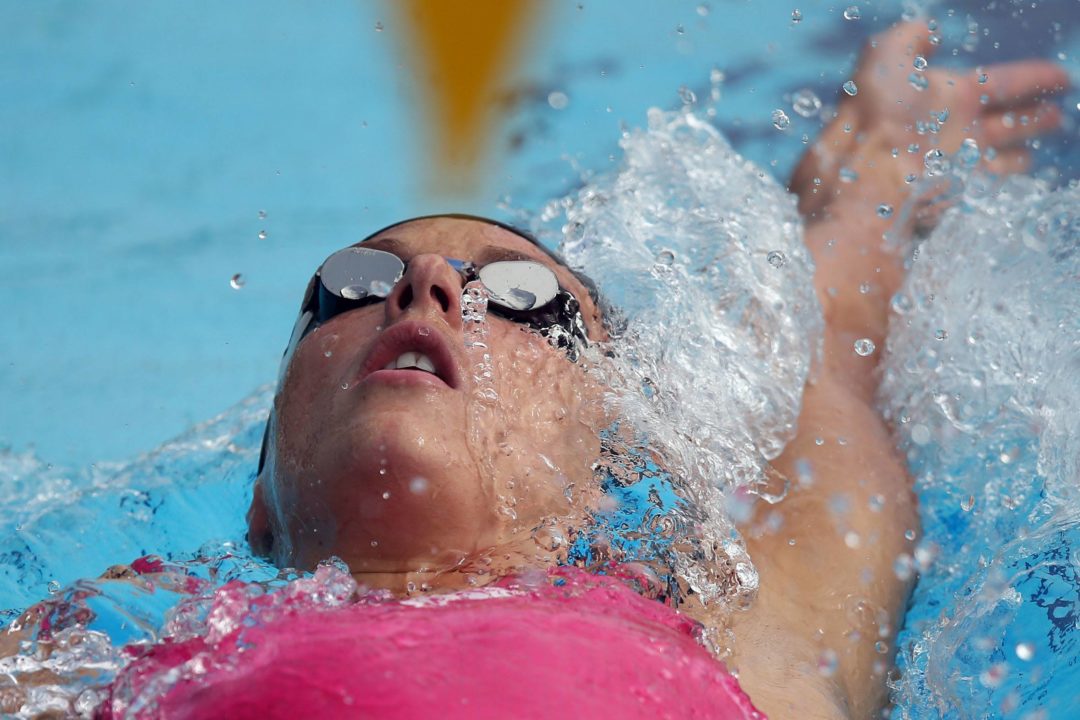 Katinka Hosszu started another strong night of swimming taking the women's 400 IM in a time of 4:23. 67... Current photo via Satiro Sodre/SSPress

Several new faces have the potential to shine brightly during season 2 of the International Swimming League (ISL) competitions.

Hungarian Gergely Gyurta took the men’s 1500 freestyle leading the race from start to finish touching in a time of 14:36.38. Gyurta turn first at the 50 mark and never looked back winning the event by close to five seconds. His time is a season’s best and put him on top of the world rankings taking over that sport from Russian Sergiy Frolov who posted a 14?38.21 in Moscow.

Hungarian superstar Katinka Hosszu won her first event of the evening and fourth event of the competition taking the women’s 400 IM in a time of 4:23.67. Hosszu took over a second lead at the 100 meter mark and would not be challenged throughout the entire race, winning the event by almost three full seconds.

Spaniard Mireia Belmonte and American Caitlin Leverenz had a tremendous battle for the silver. Heading into the final 50 meters Leverenz had a lead of two one-hundredths of a second, but Belmonte had as stronger final second half of her freestyle leg ultimately finishing second in a time of 4:26.42. Leverenz picked up the bronze in a time of 4:27.19.

Fran Halsall took another sprint freestyle event posting a time of 51.96 placing her third in the world rankings behind Femke Heemskerk and Ranomi Kromowidjojo. Australian Emma McKeon took the silver in a time of 52.21 followed by Miki Uchida who recorded a time of 52.69.

Kousuke Hagino took his first event of the evening in the 200 freestyle in what was an entertaining battle between the top three men. At the 100 meter mark Hagino turned in sixth, heading into the final 50 meters the Japanese star turned in the third place position behind South African Myles Brown and Australian Thomas Fraser-Holmes. Hagino out swam both men by over half a second to win the event in a time of 1:42.62.

The men’s 100 breaststroke was the most exciting race of the evening as Hungarian Daniel Gyurta and Yasuhiro Koseki of Japan were never separated by more than two one-hundredths of a second. Koseki had the lead at the 50 meter mark turning in a time of 27.07 followed by Gyurta who split a 27.09. Gyurta had a slightly better second half winning the event in a time of 57.23 followed by Koseki who touched in a time of 57.24.

Koseki’s Japanese teammate Ippei Watanabe took the bronze in a time of 58.30.

After losing out in the 100 breaststroke to Alia Atkinson of Jamaica long course world record holder Ruta Meilutyte got her revenge taking the 50 breaststroke in a time of 29.36. Meilutyte’s time puts her second in the world rankings behind Atkinson who posted at time of 29.12 in Dubai.

American Lillia King finished third in a time of 30.13.

South African Chad le Clos took his first event of the evening taking the men’s 100 butterfly in a time of 48.95. It was not le Clos’ best performance of the year, finishing 36 one-hundredths of a second behind his world leading time of 48.56 which he posted in Hong Kong.

German Steffen Deibler finished second just ahead of a fast charging Takeshi Kawamoto of Japan. Deibler picked up the silver hitting the wall in a time of 50.24 followed by Kawamoto who touched in a time of 50.40.

In another thriller Spainard Miguel Ortiz out touched American Eugene Godsoe and German Christian Diener to take the men’s 50 backstroke in a time of 23.30. Godsoe took the silver recording a 23.36 followed by Diener who touched in a time of 23.42.

German Franziska Hentke took the bronze posting a time of 2:05.61.

Japanese star Kousuke Hagino took his second event of the evening winning the men’s 200 IM in a time of 1:51.27, breaking his own World Cup and Asian record time of 1:51.50

Hiromasa Fujimori collected the bronze finishing in a time of 1:55.02.

Both Belmonte and Hosszu returned to the water less then 15 minutes later competing for the top spot in the women’s 400 freestyle. In keeping with the theme of the night Belmonte took the event in a nail biter beating Chihiro Igarashi of Japan by two one-hundredths of a second. Igarashi turned first at the 50 meter mark and held the lead in the event until the final 50 meters.

Rie Kanetou of Japan took the women’s 200 breaststroke in the world’s top time of 2:19.18. Kanetou took over the top spot in the world rankings from Australian Sally Hunter, who she also beat in Tokyo to collect the gold.

It is only fitting in this night of tight battles that the final men’s event of the competition finish in a tie. With 50 meters to go Yuuki Shirai of Japan turned 44 one-hundredths of a second behind Australian Mitch Larkin, making up the ground Shirai and Larkin touched the wall at the same time, both posting a time of 1:49.95.

In the final women’s event of the evening Inge Dekker of the Netherlands was able to out swim Fran Halsall to win the women’s 50 butterfly in a time of 25.18. Halsall finished second in a time of 25.29 followed by Marieke D’Cruz of Australia who won the bronze in a time of 25.76.

I would love to see the video for this session. Can someone post it please?