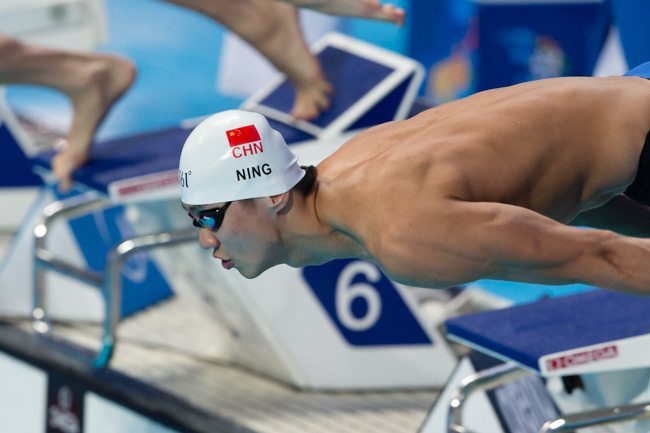 China has released their preliminary roster for the upcoming FINA World Championships in Budapest, with one notable exception.

2015 World Champion in the men’s 100 freestyle Ning Zetao has been held off the roster as of now, likely having something to do with him being kicked off the national team for various rule violations last year.

Despite being left off the preliminary roster, there is said to be a low key summer national meet held in late June, where Ning is reportedly competing. If he performs, he could be added to the Worlds roster. The Chinese federation has pressure to add him if possible. If he’s absent in Budapest, the medley relay anchor likely falls to Sun Yang, which would be a downgrade.

The preliminary roster is made up of 17 men and 22 women, including all five of their 2016 Olympic medalists. Check out the roster below:

Sun Yang headlines the men’s roster, winning gold in the 200 free in Rio and taking silver in the 400 free. Wang Shun is on the roster and will be a medal contender in the 200 IM, after taking bronze in the event ahead of the likes of Ryan Lochte and Thiago Pereira in Rio.

The third male on the roster with an Olympic medal from Rio is Xu Jiayu, who won silver in the 100 backstroke. This season he posted the 2nd fastest 100 back of all-time in 51.86, just 0.01 off Ryan Murphy‘s World Record and over a tenth faster than what won gold in Rio. He’s in medal contention in all three backstroke races, and might be the favorite in the 100.

On the women’s side, Fu Yuanhui is probably the most known name on the roster after she went viral last summer. Her hilarious reaction came after she realized she had tied for bronze in the women’s 100 back in Rio. She has actually improved her time from that swim this year by four one-hundredths down to 58.72, ranking her 3rd in the world. Along with the 100, she has to be considered the gold medal favorite in the 50 back after winning the world title in 2015 and sittng atop the world rankings this year.

Another notable name on the women’s roster is Ye Shiwen, who shocked the world when she stormed home for gold in the women’s 400 IM at the London Olympics. She has had her ups and downs since, and though she may not be a perennial medal contender anymore she was a still a Rio finalist in the 200 IM.

I doubt they leave Zetao at home the year their medley relay can win gold at worlds.

Maybe beating the US is always much easier on paper than it is in reality. Examples: Men’s 4×100 free relay (favorites AUS winner USA) Men’s 4×100 medley relay (Britain had a chance they lost by a decent margin) Women’s 100 free women 200 free women’s 200 backstroke women’s 100 breast men’s 50 free men’s 100 backstroke men’s 20 breaststroke men’s 200 fly were all races in rio that some other nation could have won. I remember people saying 2016 was cseh’s year or how Larkin was gonna sweep the backstrokes or how the Campbell sisters were gonna go 1,2 in the 50 and 100 or how seebohm was gonna win the 200 backstroke or how sojstrom (who im a major… Read more »

I agree that the U.S. has a history of stepping up and swimming beyond expectations in Olympic years, but this is a world championships the year after the Olympics. The U.S. doesn’t have the same magic at WC’s as it does at the Olympics (see 2015) and coming off an Olympic year after which many Americans took a break, things are less certain.

Ok things are less certain but u still will get Murphy or Grevers on back , unless both choked at Trails in June , Cordes/Miller or ? on breast , Take a solid Shields or Dressel on fly and Adrian on the anchor – u still get a pretty solid medley relay – hard to beat nonetheless .

A deep sleep at that…

The U.S. will win unless get DQed for false start/ Miller’s multiple dolphin kicks

The thing is , in my humble intuitive sense , that Ning has received many obstacles from the Chinese federation – for reasons i dont remember well . It was reported in that documentary where Ning exposes his training life , etc…… I feel there is something we dont know going on there .

Ever since Perth, the Chinese have tried to keep their international teams clean enough to pass testing in the lead up to a big event. (Yeah, one or two slip through each time, but it seems like it’s nowhere the issue their domestic clubs have)