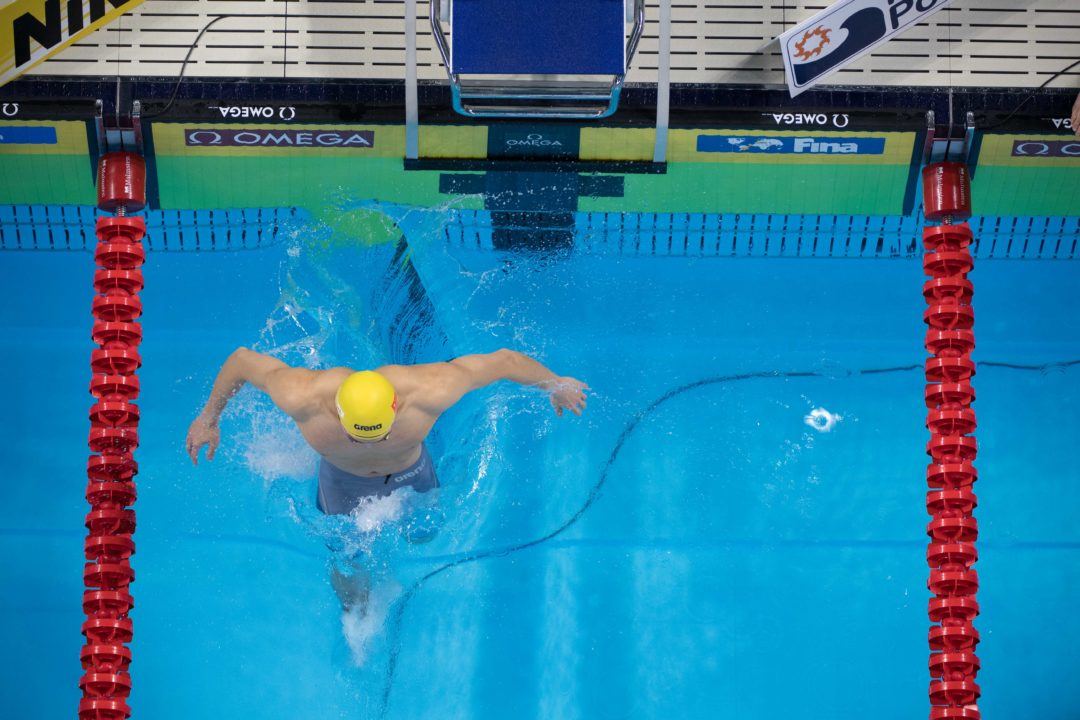 Jiayu threw down a 51.86, clearing the former Asian Record of 52.24 and missing Ryan Murphy's World Record by just a hundredth of a second. Archive photo via Mike Lewis/Ola Vista Photography

WATCH: Race Videos From Day 8 of the Chinese National Championships

WATCH: Race Videos From Day 7 of the Chinese National Championships

On day 7, Chinese backtroke star Xu Jiayu continued to rewrite the record books with a 24.42 in the 50 back, setting a new Chinese National Record in the process

China’s Li Zhuhao shaved four tenths of a second off of his own junior world record this week, going 1:55.09 in the 200 fly.

He’s now the 2nd fastest performer in history, missing Ryan Murphy‘s World Record of 51.85 by just a hundredth of a second. The shortlist of people who have broken 52 seconds in the event now includes 3 men: Murphy, Jiayu, and Aaron Peirsol.

You can check out the video of Jiayu’s race below. Shoutout to commenter wusalu32 for the link:

Great swim, but I have become too cynical about the Chinese program to believe he will repeat that performance at an internationally-regulated meet.

Overall, their swimming power will only get stronger in the future. 2018 Asian Games will be a clash between Dragon and Godzilla.

Mark my God given words.

On Asian Games note, it is time Australia leave behind their romantic idea of being a British colony, dominating the Commonwealth Games,… Read more »

Yes seriously . Those guys come nearly form nowhere …..most of the time .

Most of the time? Care to give us a list of those swimmers?

my teasing worked perfectly well with you . LOL

2
-16
Reply
not important
Reply to  ERVINFORTHEWIN

They are not from nowhere, there’s just too little media cover about them in English. Language does prevent the communication of information.

Nowhere? He was the Olympic silver medalist and already 52.8 in the 2014 Asian Games.

Many people outside USA would also asked questions: Kathleen Baker who? Lilly King?
Everyone outside Canada were like: Oleksiak? How did she come from nowhere and won Olympics gold?

Australia is not Asian. It’s Oceanic. This Australian idea that you can choose to be part of Asia (by playing in their WC qualifying, calling your Tennis tournament the Asia Grandslam etc) is nonsense.

As for the “more competition” – You lost to England in 2014, how much competition do you want man 😉

All your economic points are valid, but, I have one qualm. Did a booming economy help or hinder the USSR in creating an elaborate state sponsored medal-quest that stopped at nothing? If the Chinese federation is so thorough & transparent, why can’t they keep Ba Zhen away from their athletes, not least an athlete convicted of doping? There is a mountain of examples that suggest… Read more »

Oh maaann…. You are speaking to the wrong guy.
I don’t freakin care if Australia wants to be part of Asia, they didn’t want to be part of Asia for hundred years, that is, until Asia is rising again and Australia depend more and more on Asia for their economic well being and political/military strategy.

I’m just agreeing with commonwombat who proposed the other day to stick a fork in Commonwealth games as they fast becoming irrelevant in today’s reality.

Yeah England can bask in glory for beating Australia in their home games, what’s new. Next year it will be totally reversed. But other than England and Australia, no one else really care. Most top athletes (track… Read more »

I think GC will be the last CWG . We don’t even need to link it to geopolitics . Its just over

Is this the Chinese government on Swim Swam? China’s men and women swimmers have both made great improvements. Please leave my childhood hero ..Godzilla out of this.

Dragon is China and Godzilla is Japan.

Asian Games is next year and it’s a huge deal for Asian countries, and traditionally used as a platform to show who wields the greatest power in Asia, in a peaceful way.

Asian Games is more like the Olympics for Asian countries. Pan Americans, Commonwealth games pale into comparison with Asian Games.

So Yeah, it will be Dragon vs. Godzilla as Godzilla is charging energy from all those nuclear power station radioactive in preparation to lay waste in 2020 Tokyo. While Dragon is not too keen to slide down from the sky.

I sincerely hope Xu’s times are legitimate, but I see no reason to assume he can go that fast internationally. It is a shame that clean athletes have to live under the Chinese team’s cloud of suspicion.

In the last two years, at least 7 Chinese National Teamers failed drug tests (https://swimswam.com/run-back-recapping-russian-chinese-doping-scandals-efimova/).
The federation never disclosed 3 names (that I can find), 3 received short suspensions (Zhao Ying, Wang Lizhou, An Jiabao), and 1 swimmer (Chen Xinyi) tested positive AT the Olympics. That does not include stars like Sun Yang or Ning Zetao who had prior positive tests, or the “coincidence” of how many swimmers go faster in China than they ever do abroad.… Read more »

Did you not watch Rio where Xu won silver in 52.3?

Just beautiful, breathtaking swim.
As someone mention the earlier thread, he has the technique of Irie with stronger power, and his turn and underwater is just excellent, not on the same class of Murphy but close enough so he won’t be too disadvantaged.

He is in the same program as Fu Yuanhui, Ye Shiwen and Li Zhuhao

Li Zhesi had the same coach too and she failed a test for epo.

Yuliya Efimova had a very famous US coach.

That is just not true. All athletes in that program are from Zhejiang province. Li Zhesi is from Liaoning province.

8
0
Reply
not important
Reply to  xenon

Who tells you Li Zhesi had the same coach?

Now let’s see if he can do it outside of China….

Like he did to a Silver medal on Rio? Not that I expect that program to be an example of Clean results.. but anyone who saw Rio olympics know him..

Factually, Xu Jiayu’s yearly’s best times since 2012 were always swum outside of China.

All the ignorant comments and fake news written with such conviction here are really amusing.

Fantastic swim!!
I don’t thinh it is a one-hit-wonder!! He can break the WR at WC. He has techniques, he has powers and he has the front speed, etc,…. The only performer and the performance can stop this are Murphy and his performance at 2016 Summer Olympics games in Rio