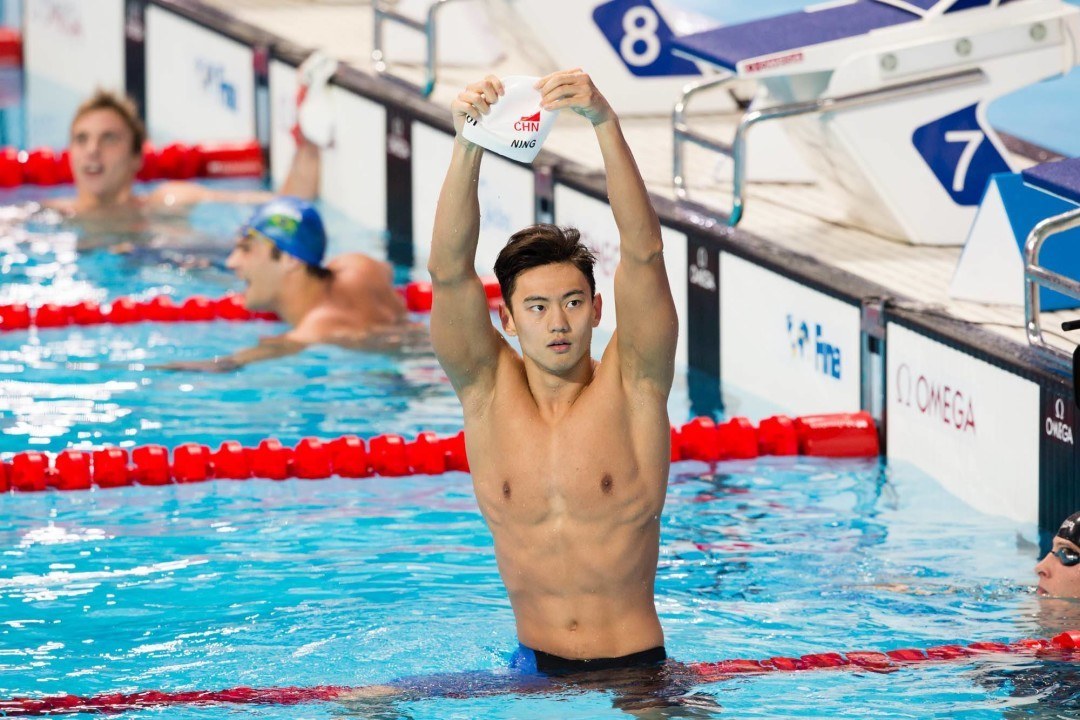 Reigning world champion in the men's 100m freestyle event, Ning Zetao of China, has been kicked off the national team due to violations. Archive photo via Tim Binning/TheSwimPictures.com

Rumors hit news outlets last year regarding Chinese 100m freestyle world champion Ning Zetao having been kicked off the national team, but, at the time, the 23-year-old denied the reports.  However, a memo was leaked today from China’s State General Administration of Sports Management Center, which plainly spells out 3 specific violations that have indeed led to Ning being sent back to his Chinese Navy swimming team.  Charged with refusing to participate in a relay event, failing to obey national team competition rules and working as an unauthorized spokesman, the leaked memo appearing on Sports SINA clearly states that Zetao has been dismissed from the Chinese national team.

Last year, Ning entered a sponsorship agreement with Chinese dairy brand Yili pre-Rio, a brand which is in direct competition with the national swimming team’s official milk sponsor, China Mengniu Dairy. The young star also signed a partnership deal with Adidas, one which was supposedly unauthorized by Chinese Swimming and also one in direct conflict with the team’s official apparel sponsor, 361 Degrees.

Although Ning has been removed from the Chinese National Swimming team, the act doesn’t carry the same destructive impact as it might in other countries, whereby, we should still expect Ning to compete at this year’s World Championships.

The only thing Ning Zetao is “guilty” of is not giving in to the very corrupt, bureaucratic China National Swimming Team Governance officials. Gangster like officials have sabotaged Ning’s training and threatened his right to compete in the Rio Olympics; they hired online trolls to spread fake news to ruin his reputation. But as of a man of integrity, Ning holds on to his principles and stays true to his heart. He will always have my support. Cheers for Ning Zetao!!!

Hope he will shine at the world championship

Ning never denied or approved the reports. He said that he never heard any content or got a copy of this memo, let alone received the original. Actually last September he handed in an explanation in written form to state that he had to leave the national team to get a treatment for health issues after Rio Olympics and Xu Qi, one of the officers, said okay it would be reported to the head officer(Wang Lusheng himself). Never got a reply. Not until the day before yesterday when the news went viral on the Internet did he know he got kicked off the national team. And it wasn’t a memo from China’s State General Administration of SPORTS MANAGEMENT CENTER(I think it was… Read more »

Ning is a genius in 100-meter free style swimming as Asians are poor at swimming especially short distance items. It’s a pity if the news is true. I just heard that he had been treated unfairly. It just seems the rules for Chinese athletes are a bit weird.

I heard that previous leader of Swimming Admin Center agreed Ning to sign Yili, then new leader Wang asked him to cancel that contract and sign for another brand. After unsuccessful attempts to force Ning, Wang asked Ning to compete in 4x200m freestyle but not his strength – 100m freestyle. Ning refused and Wang thus stopped his training in Jun 2016, cut his meal card, force him to leave the swimmer’s dormitory, and Ning’s coach also disappeared. As a result, Ning didn’t get into 100m freestyle final in Rio Olympic even though he was the world champion in 2015 for that event.

I cannot believe this is Ning’s ending after his contribution to China. China…Sigh…

This is typical China. If you don’t obey my orders, I will ruin you for whatever reasons, even though the reasons look so stupid and ridiculous.

Yeah that’s what China’s swimming administration center does––Do as I say or I’ll destroy you. They don’t do it according to the newly updated regulations of the national sports bureau. They do it according to their power. Wang Lusheng and Xu Qi, who are in charge, need to get kicked out for being unprofessional to ask Ning to give up 100m freestyle and go on the 200m-freestyle relay race that he has never been trained for, and tyrannical to ask Ning to violate a sponsorship agreement that he has entered previously and validly with Yili Dairy. Ning is a talented and assiduous young man, and he doesn’t deserve this.

The national player in the Chinese context have limited right. It seems to sign the contract of selling themselves??? I don’t believe the swimmers are willing to give up the career because of that matters like partnership with brand. There must be something fishy behind this. What’s the truth?