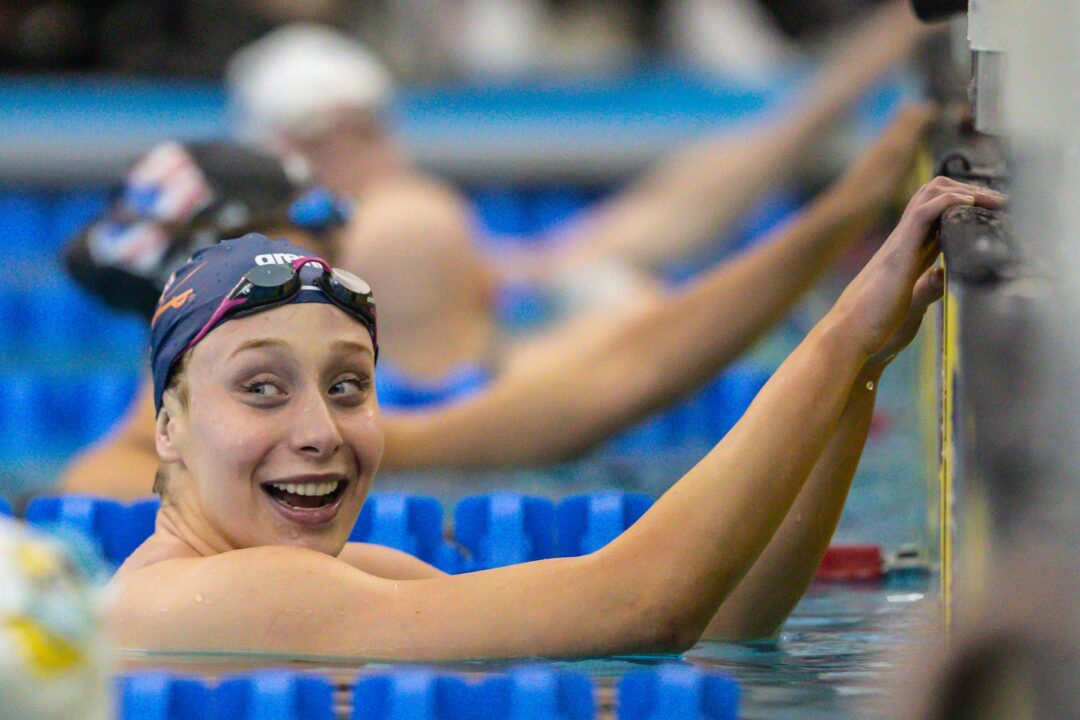 Three-time NCAA champion Paige Madden is making the move to one of the top senior training environments in the world at Loughborough University.  Current photo via Jack Spitser/Spitser Photography

Paige Madden is making the move to one of the top senior training environments in the world at Loughborough University.

Madden, a three-time NCAA individual champion at the University of Virginia and a silver medalist at last summer’s Tokyo Olympics, announced the decision Sunday via Instagram. The 23-year-old Alabama native plans to spend two years overseas at Loughborough, located in the East Midlands of England, while pursuing a master’s degree in clinical exercise physiology.

“I was looking to go back to school regardless and this seemed like a great fit factoring in both academics and athletics,” Madden told SwimSwam. “As far as going overseas, I felt inspired after spending a month in Italy during ISL. I love experiencing different cultures – which Loughborough allows me to fully immerse in!”

“I haven’t developed a detailed training plan yet, but I’m hoping to have sort of a hybrid between Ian and Andi much like I did with (Virginia coaches) Blaire (Bachman) and Todd (DeSorbo),” Madden said.

Madden is the fifth NCAA champion in the past three years who has taken their talents to Loughborough. Swedish Olympian and European Champion Sophie Hansson made a similar move in late April after completing her career at NC State, joining her older sister, Louise Hansson (USC), and fellow NCAA champion and Austrian Olympian Felix Auboeck (Michigan). After arriving at Loughborough in the fall of 2020, Louise Hansson won her first major individual gold medal at last December’s Short Course World Championships in Abu Dhabi. The two-time Olympian helped Sweden tie the world record in the 200 medley relay before blasting a new Swedish record in the 100 back (55.20) to bring home her second gold. Auboeck has also enjoyed recent success, including a gold medal in the 400 free at last month’s Mare Nostrum Barcelona in a season-best 3:47.60. Auboeck’s girlfriend, U.S. Olympian Catie DeLoof, trains at Loughborough as well.

Loughborough is home to a number of different training groups, including World Record holder and Olympic champion Adam Peaty under coach Mel Marshall. The state-of-the-art training facility includes a £1,000,000 camera system that can fine-tune race-specific details. Their training groups are small and elite, allowing for more individualized training opportunities and an emphasis on international high performance. Academically, they offer the option to pursue a master’s part-time (an option not typically offered in the U.S.) for a much more affordable price than many NCAA universities.

Madden swam the 400 free individually at last summer’s Olympic Games in Tokyo, where she placed 7th. She also swam prelims and finals legs on the American 800 free relay that earned a silver medal and set an American Record.

“I’m just so grateful for my time there,” Madden said of her experience in Charlottesville. “I’ve grown and changed so much because of it. I sobbed telling everyone I was leaving – I think that tells you how close I hold it to my heart.”

In late April, Madden revealed via Instagram that she had been suffering from Hashimoto’s disease for over a decade, although it had not begun to seriously affect her swimming career until this season. She just missed the ‘A’ final in the 200 free before scratching from the 400 free. Madden said that she is taking the rest of the summer to focus on her mental and physical health.

it is strange how some place becomes the talent hotbed for a while and then another place…. so on and so on….

Catie’s 400 free time is incorrect. It is Felix’s winning time you reported

It’s a little confusing to read but they got it right. Catie doesn’t swim the 400, so they’re talking about Felix.

Paige knows that how special she is … to everyone she has ever encountered. Wahoo Nation and I wish her every success — in swimming and in life.

Paige is a boss! Hoping for the best for her in managing her condition. I think she’s a real 200 free threat, especially on relays, and the U.S. needs that. Also 4:03 is not messing around. Good luck, Paige!

This is usually about the time it falls apart.

Will you never not trash other countries swimming?

Seems like a great life experience. Hope it works out!!!

Except they’ve lost deloof and conger too

Not sure if you could characterize it as losing Conger. I think they separation was a mutual decision if not a Todd/Virginia decision.