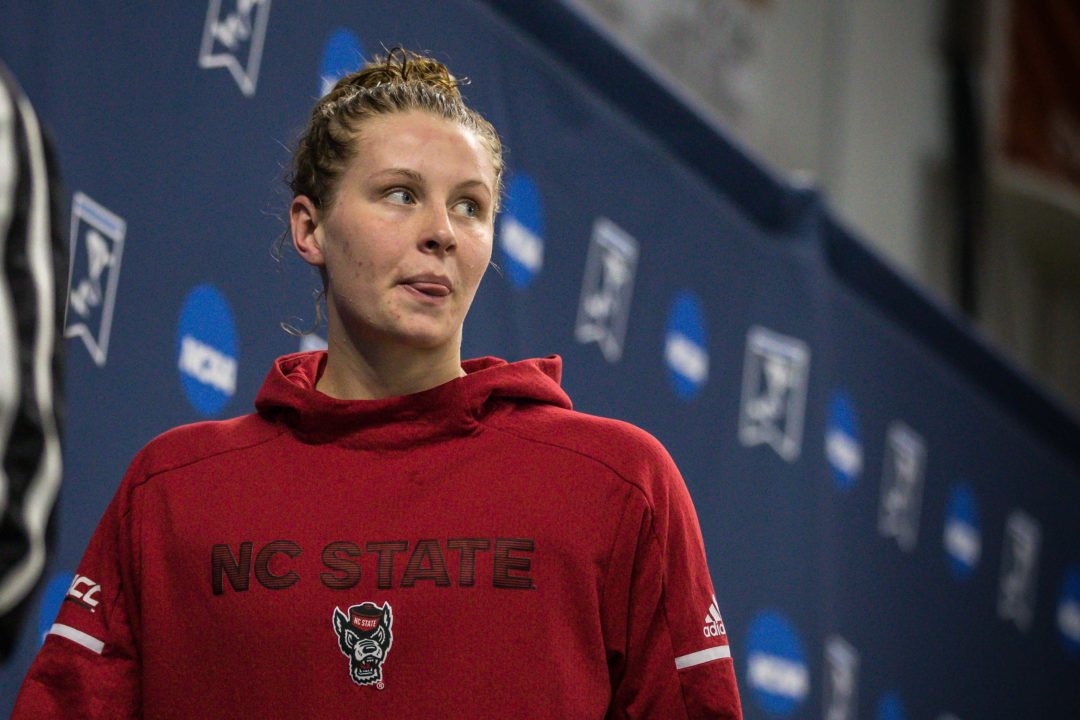 Sophie Hansson, the 2021 NCAA Champion in the 100 and 200 yard breaststrokes, will forego her COVID-waiver 'super senior' season of eligibility and train at Loughborough University in the UK. Archive photo via Jack Spitser/Spitser Photography

Swedish Olympian and European Champion Sophie Hansson will join the training group at Loughborough University in the UK after completing her career at NC State.

Hansson, 23, already has a decorated resume but in American collegiate swimming and at the international level. She finished 3rd in the 100 breaststroke and 200 breaststroke at March’s NCAA Championships meet. That comes a year after winning both NCAA titles (along with the 200 and 400 medley relays) as a junior in 2021.

Last summer, she placed 6th in the 100 meter breaststroke at the Olympic Games.

Prior to those Olympics, she swam at the European Championships in May, where she won her first individual international gold by clearing the field in the 100 breaststroke.

Hansson will join Ian Hulme‘s group at Loughborough in the East Midlands of England. Loughborough is a home to a number of different training groups, including World Record holder and Olympic champion Adam Peaty under coach Mel Marshall.

Hulme’s group includes mostly students and alumni. Hansson will be working on a master’s degree in international business at Loughborough.

In this move, she will follow in the footsteps of her older sister Louise, a fellow World and European Champion who was an NCAA Champion in the United States at the University of Southern California. Sophie trains under Hulme and is also studying international business at Loughborough.

Louise Hansson is primarily a butterflier and backstroke, and the two swam together last December on Sweden’s gold medal winning 200 and 400 medley relays at the World Short Course Championships. There, Sophie won silver in the 100 breaststroke, bronze in the 50 breaststroke, and bronze in the 400 free. Louise won the 100 backstroke individually and earned silver medals in the 100 fly and 200 free relay, and bronze medals in the 400 free relay and 50 backstroke.

Sophie Hansson says that she plans to compete for Lougbourough in the British collegiate BUCS system as well.

This move means that Hansson won’t use her 5th year of eligibility that was granted by the NCAA because of the COVID-19 season at NC State. She leaves Raleigh with 22 All-America honors and 11 ACC titles, including four straight in the 100 breaststroke. She was the 2019 ACC Freshman of the Year and a 2021 Honda Sport Award Finalist as the best swimmer in the NCAA.

She was also named to four Academic All-ACC Teams and has three Scholar All-American from the CSCAA as well, which is expected to be four when the 2022 awards are announced.

Congrats Sophie on the next phase of your career. 🐺

Yay Sophie! Such an awesome person and superstar swimmer. Good luck on your pro career. NCST will miss you.