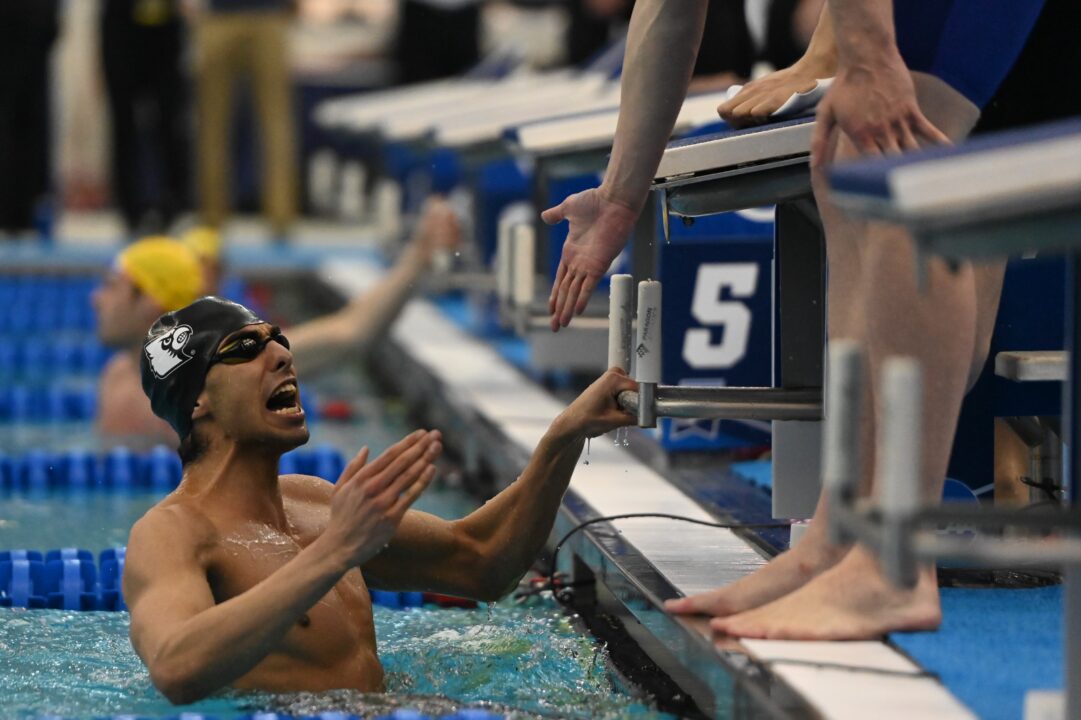 The Louisville senior has shared his story of attempted suicide and encourages others suffering from depression to seek help. Archive photo via NCAA Photos

Elaraby shared his story on Instagram as a way to encourage others suffering from depression to seek help.

“Blindness isn’t only loss in your eyesight, your heart can be blinded too,” wrote Elaraby, who swam the anchor leg on the 200 free relay team that took home the Cardinal’s first-ever NCAA relay title last year.

“I lost vision in my heart that night. I couldn’t see through all that darkness and loss of hope anymore. But I am here telling my story because part of my heart regained vision while the rest of it was unfortunately beating its last beats that night. If you are reading this and suffering in silence, I see you and I hear you. Please reach out for help because we love you!”

Less than two weeks before the NCAA Championships in March – where Elaraby scratched from the 50 free as the eighth seed as well as the reigning champion 200 free relay team – Louisville’s top sprinter and relay anchor fell into a coma after being rushed to the hospital. Luckily, he made a life-saving call before slipping out of consciousness.

“On March 12th night I lost hope in living anymore, I texted my roommates I love them and decided to go to sleep forever,” Elaraby wrote.

“An hour later when I finally started feeling it happen a small part of me finally woke up and reminded me of the people I love and love me and if tomorrow started without me and I wasn’t there to see their eyes will be filled with tears for me and I immediately panicked but it was too late because I had already started losing the feelings and control in my hands and legs, my vision was already blurry, I had started hallucinating, and as soon as I stood up I collapsed on the ground. I picked up the phone and called my best friend and trainer who rushed back to the room but I thought it was too late already. Last thing I saw or heard was him calling 911 and describing my condition and that was the most helpless I ever felt being trapped in my body listening and seeing anything but not being able to move or say a single word and soon after that I stopped breathing.

“Two days later I woke up from the coma in the hospital with a ventilator in my mouth (after finding out I had stopped breathing and my heart had stopped beating in the ambulance) with my coaches and team of doctors thanking me for calling someone [in] the last minutes of my consciousness,” he added. “I am telling my story because I don’t want you to think you’re alone or you’re not love, I thought the same and I was wrong.”

At least five college athletes have ended their lives since March. If you are struggling with thoughts of suicide or worried about a friend or loved one, help is available.

We are here for you, Abdelrahman! Thank you for being brave and sharing this, and although I don’t know you personally, am thankful you are here today! Be well, stay safe, and stay healthy! We support you as a swim community!

What a brave young man to share his story with the world, I am thankful for his honesty. My son was a D1 college swimmer that struggled with depression and was seeing a therapist at his college. He told his coach he was stuggling and his coach told him he wasn’t trying hard enough at practice when he was actually stuggling mentally and physically. He ended up quiting the team and the sport of swimming that he once loved, he also dropped out of school. I hope coaches see that these student athletes need to be listened to and believed when they reach out for help. My son transfered and finished college at a school without a swim team after… Read more »

I’m not one for sharing something personal but, I’m glad Haridi is okay and completely understand what this is. Even though I never had the guts to attempt, I developed depression in June of 2020 and didn’t tell a single person or reach out for help until this past Christmas. You feel alone and feel like there’s no one there for you at all. It affected my swimming in late 2020 through most of 2021. I felt burnt out, not doing well somewhat physically but mostly mentally struggled. It sucks all the life out of you. I still struggle with sometimes and am currently seeing a therapist but just know your never alone. Do know I am doing much better… Read more »

In college and for many years after I was done competing I thought I was alone in my unexplainable internal debilitating sadness. For anyone who has spent days, weeks, months in bed unable to move for no rational reason—you are NOT alone. I have been there and it sucks. It is beyond scary and humiliating. Depression/anxiety is real and nothing to be ashamed of. It is a disease. Society needs to do a much better job at helping people who suffer from mental illness. Thank you, Abdelrahman, for coming forward and having the strength to say something. I wish you the best and always ask for help. Please.

Thank you so much for sharing this deeply personal and emotional support for a fellow swimmer struggling. I grew up amazed by you, and now you are a parent and work with USA swimming. I and so many of my teammates struggled with depression and constant negativity that drove us to succeed. Now I’m “better”, after a lot of therapy, and honestly, after seeing a lot of horrible things in my profession. I’m a surgeon, so I see death and heartbreak daily and I think that really put things into perspective for me. I also have young children which changes you in ways you can’t describe until it happens. So what do we do now? How do we make sure… Read more »

So powerful and so helpful for young swimmers to see that they’re not alone. Thank you both for these stories.

Thankful that he is still with his family and the greater swimming community today. The stigma of discussing mental health, especially in college athletics, must continue to be broken down. It is incredibly brave of him to put his story out there and be so vulnerable and open. As a young male college swimmer myself, I think one of the hardest things to do is admit that you’re struggling, and seek help. I hope that others see who see this are inspired and realize they are not alone in their struggles. I hope we can all learn to lean on teammates, coaches, and family in the midst of challenging points in each of our lives.

The more people that normalize depression, the more lives that are saved. Very proud of this young man.

This guy is the personification of courage. Athletes put an extraordinary amount of pressure on themselves, which tends to grow with success. Michael Phelps and Allison Schmitt are public names who can speak to the struggle of managing that burden, and I am sure almost every high-level athlete would embrace this man and offer commiseration. Props to him for winning the most important fight and for sharing his experience.

This is brave and very important. I am sure your post will help others – maybe even save lives.