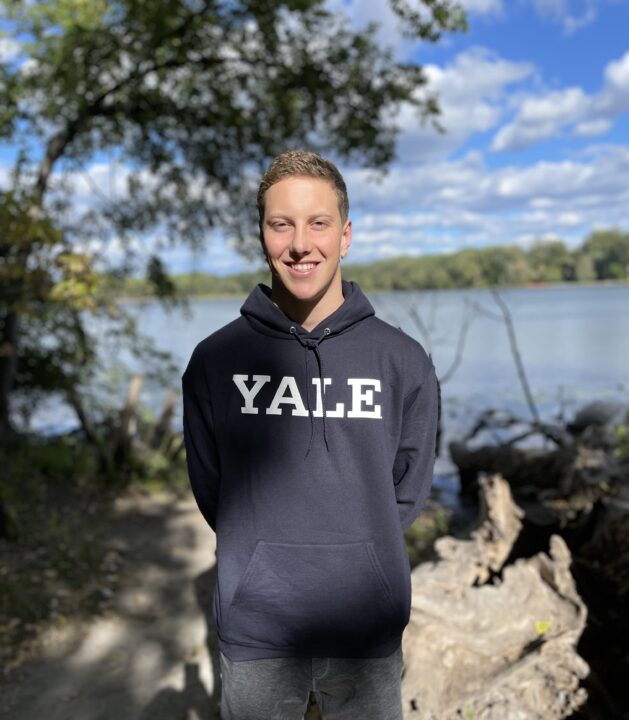 National Jr. Teamer Charlie Egeland has announced his verbal commitment to the Yale Bulldogs, beginning with the 2023-204 season. Current photo via Charlie Egeland

Breaststroker Charlie Egeland has announced his verbal commitment to Yale University, beginning in the fall of 2023. Egeland trains year-round with the Aquajets Swim Team, and is completing his senior year at The Blake School, located in Hopkins, Minnesota.

Egeland is a member of the 2022-2023 USA Swimming National Junior Team for his performance in the 100m breaststroke this summer. On the 17/18 All-Time Top 100 Age Group rankings, he is ranked 25th for the 100 breaststroke (LCM), and 54th for the 200 breaststroke (LCM). Although Egeland specializes primarily in breaststroke, he also is competitive in both the 200 IM and 200 freestyle.

Egeland is coming off a very successful summer, where he advanced to finals in multiple events at both Phillips 66 Nationals and Speedo Junior Nationals. At Speedo Juniors, he claimed four top-8 finishes, with his highest being 5th place in the 100 breaststroke. In the 200 breaststroke, he dropped almost 3 seconds from his personal best set in July at the Minneapolis Sectionals to go a 2:15.50. He also competed on the Aquajets’ 200 and 400 medley relay as the breaststroke leg, splitting 28.30 and 1:01.49, respectively.

Egeland’s high school team, Breck-Blake School, has won 6 consecutive titles at the MSHSL Boys Class A (small schools) State Championship. Egeland has been a big major contributor to his team’s wins, especially this past year. Egeland individually won the 200 free (1:38.00) and placed second in the 100 breast (54.87), and contributed to the winning 200 medley relay (25.54)  and 200 free relay (21.45). His 200 free and the 200 medley relay were both Class A records.

So many of his best times end in .00 or. _0…did someone just relay these over the phone, or are they all seriously accurate? 🙂

This guy is epic