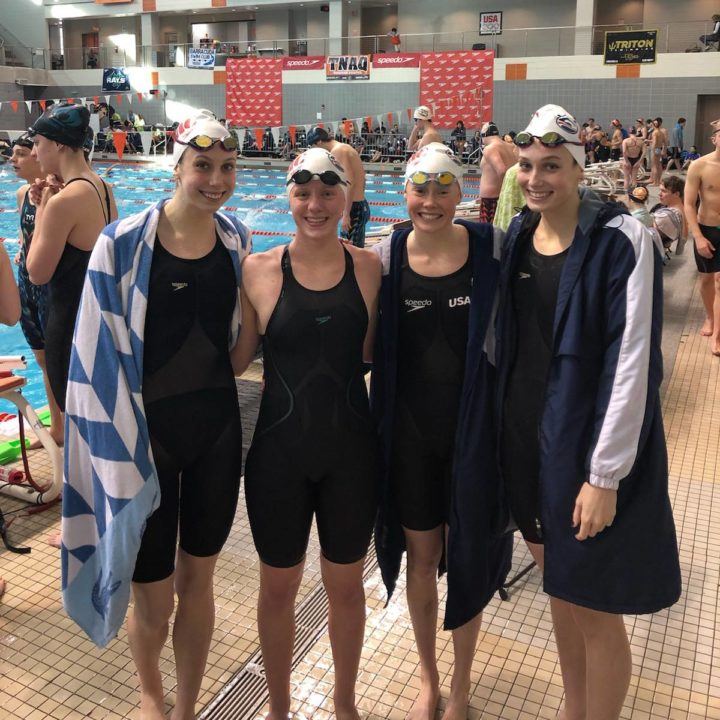 The Mason Manta Rays aren’t the only team at the 2019 Southern Premier Meet that have a pair of elite siblings at their disposal. The Nashville Aquatic Club 15-18 girls, including Junior National Teamer Gretchen Walsh and senior National Teamer Alex Walsh, broke the National Age Group Record in the 200 medley relay on Saturday.

The team of Alex Walsh (backstroke), Ella Nelson (breaststroke), Jordan Hurt (fly) and Gretchen Walsh (freestyle) combined for a 1:37.04. That broke the record off 1:37.65 set at 2017 Winter Juniors by the Fort Collins Area Swim Team.

While Alex and Gretchen Walsh have each broken multiple National Age Group Records individually, once ratified, this will be the team’s only relay record. They broke a few records in 2015 and 2016 when they were still 13-14s, but those records have since been broken.

Alex Walsh‘s backstroke leadoff set the team off on a record-setting path: she out-split Bayley Stewart by a monster 1.62 seconds, which gave her teammates plenty of room to play with. Gretchen’s anchor of 21.25 would have been 4th-best in the 200 medley relay finals at last year’s NCAA Championship, and she’s only a sophomore in high school.

Because Gretchen Walsh is still 16, the team is ineligible for 17-18 National Age Group Records. That record still belongs to SwimMAC Carolina’s 2014 relay, which swam a 1:39.40.

Correct me if I’m wrong but every big conference has had their 200 medley relays and no woman has split faster than 23.64

For a comparison, the Walsh sisters outsplit Stanford’s 200 medley relay

It’s very possibly that the top swimmers will be better at NCAAs. Nelson from UW can certainly go faster than 23.6 but she did fly on their relay.

I believe the fastest was Grace Countie of UNC, who split a 23.68 at ACCs, so you would be correct.