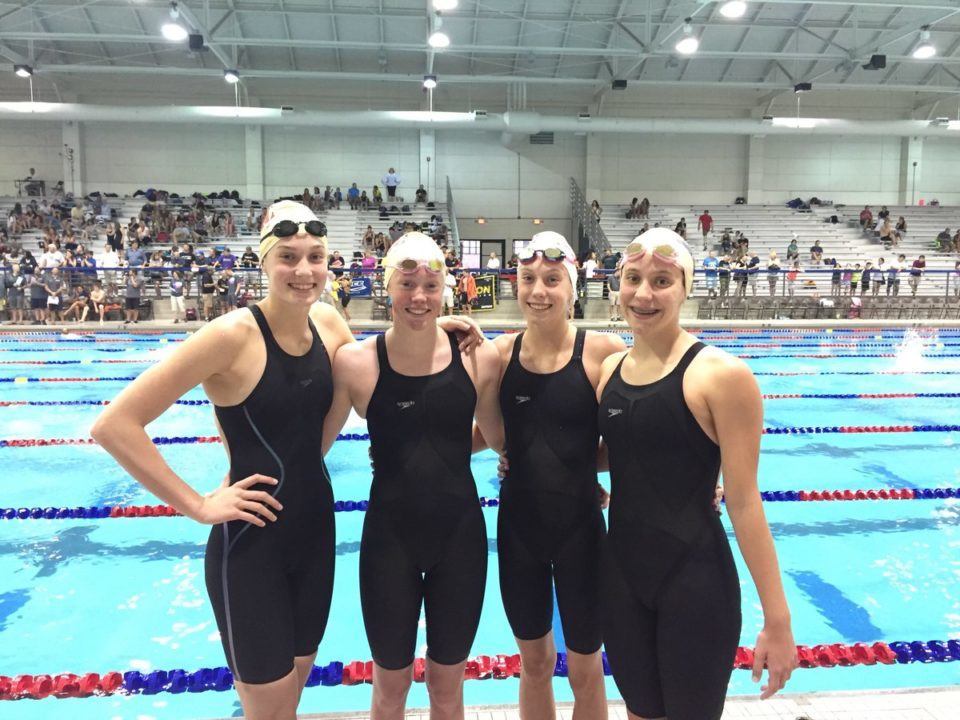 The girls of the Nashville Aquatic Club broke their second National Age Group (NAG) relay record in as many days, going 4:16.34 in the 400 medley relay.

Nashville Aquatic Club already owned this medley relay record, having broken the old North Baltimore Aquatic Club mark last July. The only change to the relay lineup was at butterfly, where the younger Walsh took over for Kallie Chelsvig.

The old NBAC team that held the record previously featured a quartet of future Division I swimmers including future American record-setter Liz Pelton. That record was just 4:20.82, meaning Nashville has now cut 4.5 seconds off the NAG in just under a year.

Here’s a look at the splits between Nashville Aquatic Club’s teams in 2015 and 2016:

They easily break the record with Alex Walsh “only” in 1.02.13 to lead-off on backstroke and Ella Nelson “only” with a 1.12.64 split.
Both girls can of course go much faster.
I’m not too worried about Alex’ average time. It was 10 days before the 100 back prelims at trials on Monday, June 27.
Last summer she swam 1.02.64 on July 17 and 16 days later at US juniors she was in 1.00.84. The miracles of rest.
Times will drop in Omaha. Will she break the minute barrier at trials? I don’t know. It will be close. Anyway if she doesn’t make it at trials she will do it later in the summer. It… Read more »