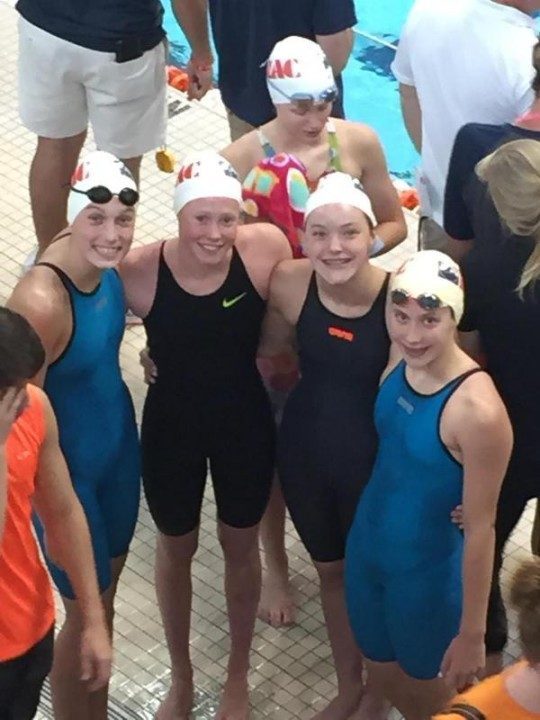 The old record was a 4:20.82 set in 2008 by the team of Elizabeth Pelton, Jordan Surhoff, Camryne Morris and Natalie Beale.

Pelton, of course, went on to a stellar college career with the reigning NCAA-champion California Bears. But all three would go Division I for college swimming: Surhoff to Texas, Morris to Tennessee and Beale to Liberty.

The exciting part about this Nashville team, though, is that they broke the record with a full year still left in the age group. All four swimmers are just 13 years old, and Nashville obliterated the old record by over two seconds.

Here’s a look at the team’s splits:

The relay keyed on a great leadoff leg from Walsh, who became one of the youngest Olympic Trials qualifiers in the nation last month with a 1:01.79 in the 100 back.

Nelson was just under her lifetime-best on the breaststroke leg as was Hurt on free, and Chelsvig was a full second and a half under her PR in the individual 100 fly.

Full meet results are available here or in a more complete version on Meet Mobile.

Who is Alex Walsh on the photo?
The girl on the left if it’s in the order of the medley relay?
I remember watching her at Tom Dolan Invitational 2 or 3 years ago. I believed she trained in North Carolina at that time. She was already very impressive. Star in the making.

Correction. She trained in Connectifut before Nashville.

Camryne Morris is at Tennessee. Record went down in her home pool

John Morse queueing up some fast swimmers these days.