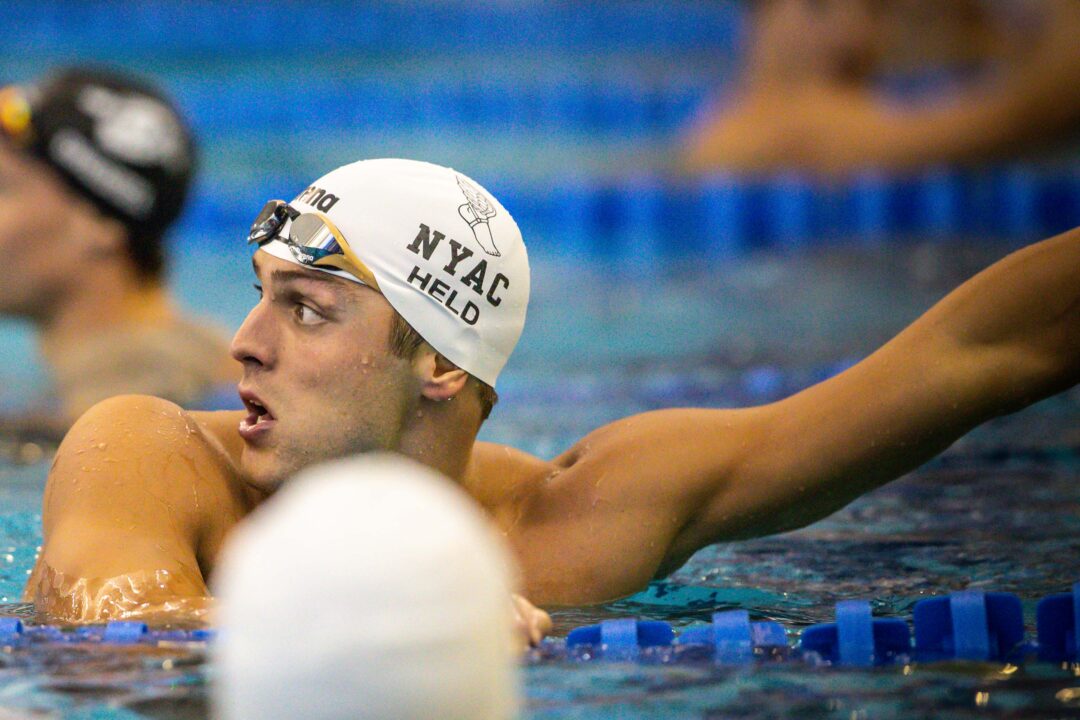 The lineups have been released for the finals for the mixed free relay, with the majority of top countries using very different teams compared to prelims. Archive photo via Jack Spitser/Spitser Photography

The lineups have been released for the finals for the 4×100 mixed freestyle relay, with the majority of the top countries using very different teams compared to what they used in prelims.

The United States retains Ryan Held from prelims, and he will lead off for his team just like he did in the morning. Following him will be Brooks Curry, Torri Huske, and Claire Curzan.

Similarly, Canada will keep Javier Acevedo from prelims, as he recorded the fastest male split on his team. The rest of the Canadian heats squad will be replaced with Penny Oleksiak, Kayla Sanchez, and Josh Liendo. Liendo will have to swim this relay at the end of a double session, as he will be competing in the 50 free and 100 fly finals beforehand.

Australia not be keeping anyone on their prelims team, and going with a fresh lineup for finals.

Every single lineup has opted to go with the male-male-female-female order.

More Nugenix. Gotta say the reviews for this are poor.

Hell of a swim for MA especially with the waves big man Ben Proud making.

With so many teams missing key components, this one is not easy to pick but I will finally “go there”.

A full strength and in-form GBR would be a legitimate title contender but this quartet is neither.

It is certainly possible for CAN to win but here they have only one realistic route to gold and that is via monumental foul-ups by both USA & AUS. Fair to say that one of them could well misfire; betting on both ….

On paper, you can certainly make a very legitimate case for AUS winning this; a full strength AUS team could well be favoured but they realistically cannot afford any substandard leg and the AUS females do not really have the… Read more »

0
0
Reply
BadShoulder
Reply to  Will

I hope Curzan has enough gas in the tank. She seems like she’s feeling her tough schedule at this point.

Wish they had gone Brown or Hinds to spell her.

Yeah, I was hoping the same…shes got the medley tomorrow, too. And more individuals…

I hope they give Nat the prelims swim in the medley relay tomorrow. Brown, Huske, and Curzan swim tomorrow and Douglass didn’t swim well coming off the 200 breast into the mixed free prelims. Unless she’s injured, I don’t see how you don’t give her a shot. She’s been rested since prelims of the 400 free relay and can swim free or fly.

Why do China always insist on flunking at least one relay every time?

Intereresting that GB are leading off with Dean after his stellar 46.9 relay split. Maybe they are testing out Burras’ flying start to see who should anchor the medley relay?

I think USA has the nod over the aussies. Held and Curry were better than any of the australian men since chalmers is MIA. huske was pretty close to ocallaghan and curzan can put down a nice leg as well especially since jack is out for aussies also

Chalmers is going 2nd and hes outsplit all the american men

AUS by about 0.8 unless USA girls or Curry o cork
Something special

Maybe a tussle for bronze between Canada and GB? Liendo already will have had 2 races prior . Although he will have a bit of time would think won’t be at his best.