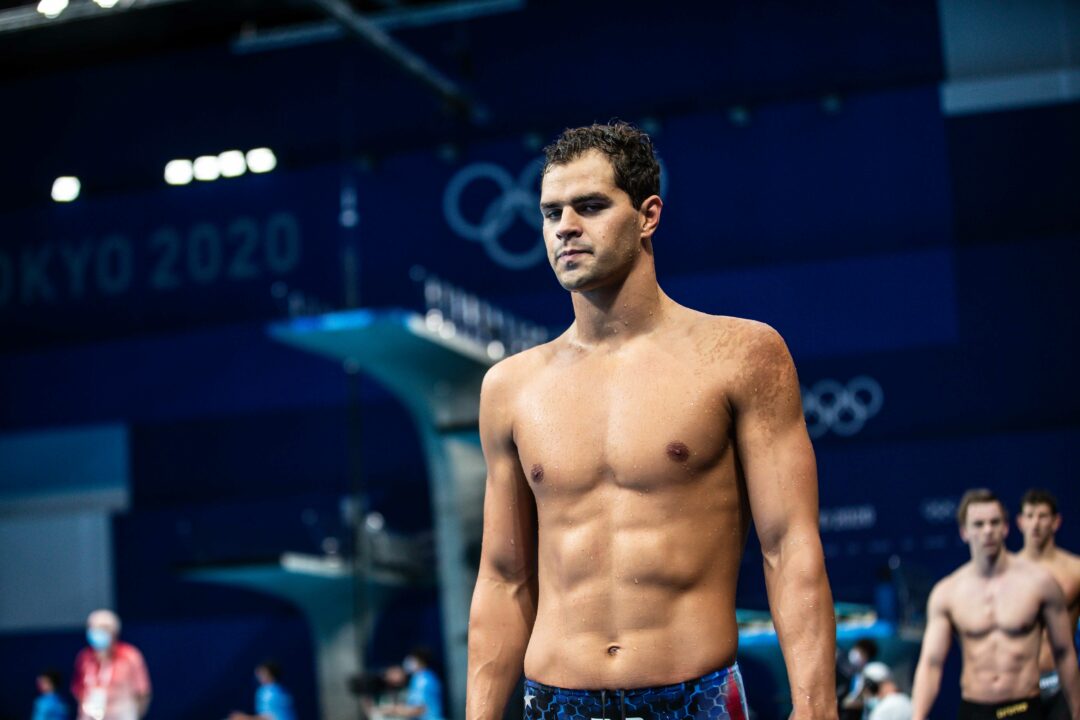 In response to photos of Andrew not wearing his mask in the mixed zone Friday, the USOPC said they are reviewing the matter and "will take action as needed." Current photo via Jack Spitser/Spitser Photography

The United States Olympic Paralympic Committee (USOPC) responded to photos of Michael Andrew not wearing a mask in the mixed zone, saying it was a violation of COVID mitigation protocol, they will be “reviewing this matter,” and “will take action as needed.

Update: As of 20 minutes before the start of Friday’s evening prelims session, the USOPC told USA Today they have reminded Andrew of “the Games policy and established COVID mitigation protocols” and he is allowed to take off his mask during interviews.

USA Today reporter Christine Brennan shared photos of Andrew not wearing a mask in the mixed zone after his 200 IM final Friday morning on social media. The mixed zone (shown below) is a space where media can interview the athletes after races.

Michael Andrew, the highest profile unvaccinated American Olympian, refused to wear a mask in the mixed zone. Every other US swimmer I’ve seen all week has worn one. pic.twitter.com/xwVFJGpkmL

The USOPC reportedly responded to USA Today: “Not wearing a mask is a violation of the covid mitigation protocols put in place by both the USOPC and TOCOG (the Tokyo Olympic organizers) – protocols we have been adamant in following as a delegation.

“We are currently reviewing this matter with the National Governing Body and will take action as needed.”

While Andrew is not the only swimmer to be seen without his mask fully on in the mixed zone, he has been open about his decision not to get the COVID-19 vaccine. “I didn’t want to put anything in my body that I didn’t know how I would potentially react to,” he told media over Zoom at the U.S. Olympic Trials Wave II.

“In the training cycle, especially leading up to trials, I didn’t want to risk any days out. There were periods where you take a vaccine, you have to deal with some days off.”

Andrew told USA Today why he was not wearing his mask in the mixed zone, saying “For me it’s pretty hard to breath in after kind of sacrificing my body in the water so I feel like my health is a little more tied to being able to breath than protecting what’s coming out of my mouth.”

“I think it’s great that there’s procedures but at the end of the day, all of us here have been under quarantine and in the same testing protocol so there’s a level of safety (that’s) comfortable when we’re racing.”

Friday evening’s prelims session includes Andrew’s third individual event of the Olympics: the 50 free. He has already swum the 100 breast and 200 IM.

At the time when Andrew explained his decision to go to Tokyo unvaccinated,  men’s U.S. Olympic head coach Dave Durden said the attitudes and actions of the athletes and staff would be what mattered in Tokyo “regardless of vaccinations or not vaccinated.”

He told media, “All of our athletes, in the community that we’re in right now, we’re being very conscious being very safe with how we’re handling our teams, how we’re going from place to place, how we’re operating in our training camp environment, how we are effectively bubbling ourselves…

“… And that’s probably the more important piece of this. Regardless of vaccinations or not vaccinated, it’s what our attitudes and actions are.”

SwimSwam has reached out to Andrew but he has not responded yet.

Christine is a typical hack

Christine Brennan did her job in tremendous fashion. Once again the crew petrified of participation trophies is laughably scared to participate in review of their actions and words. Michael Andrew and Sam Kendricks on the same day. It doesn’t get more predictable or pathetic than that. BTW, has Andrew finished his 50 freestyle leg yet? I’m worried the Closing Ceremony might have to be delayed

Two things being lost here, neither of which are a direct comment aimed at MA:

Read a bit more of Christine’s work. She may have dug up a ‘scoop’ here (a real big one, lol) but she is an incessantly bitter person who seems to hate athletes despite writing about sports for a living.

She also clearly holds a lot of personal disdain for MA and his family which she has let seep into her reporting about him since before the games even started.

Yes she seems to not be an unbiased reporter

In case you missed it, the review of his actions found no fault

Well there’s the excuse to kick him off the relays… 😉😉

I think he already has given them plenty of reason in the pool this week.

He’s taking L after L today what a shame

i guess this is why we listen to scientists and doctors, not corrupt politicians

He sacrificed my money in the 200 IM. Shocking bet.

He sacrificed his money, too. Endorsements are dead between his performance and his COVID stance. Unless he sells pillows.

That’s what the Para athletes swim…

Why so much hate? We are all brothers and sisters. His differing views have not caused any outbreaks as I’m sure (from personal experience) that the athletes are tested almost daily. So what is the issue in the public hate? He’s a young man who should’ve gotten the vaccine but didn’t. If you all cared so much about wearing masks, you would be upset about the swimmers not wearing them behind the blocks during relay events as well.

Perhaps his differing views haven’t caused any Tokyo outbreaks, but how do you think he behaved back home when he wasn’t under constant scrutiny? Wouldn’t be surprised if he passed his covid on to a dozen people when he had it.

I agree. It is hard to see so much disdain towards the Andrew family. I don’t agree with a lot of their decisions, but I do respect their right to make those decisions.

I don’t see how any of the coaches or guys would have confidence in him now. And it’s a shame. He’s crumbled under the pressure of the meet and the criticism over COVID, and he’s in his “Thy will be done” (literally he posted that after his 100 breast) phase of accepting defeat. Unless he rips a blistering 50 free to show he’s bounced back, I’d go with Wilson and Fink. Hope he looks to Spitz’s failures in ’68 and rebound in ’72 as inspiration for a turnaround.

Could he be sent home for this?

Might be best for him tbh. He’s having a really bad meet and putting his teammates at risk. He could really use some time to reflect on his actions and training so he can be a better swimmer next year

He is not putting vaccinated teammates at risk

Of course not. Said no one who’s been following COVID variants.

Yes he is. The delta variant spreads much more easily. They might not get seriously ill but if they test positive they cannot compete anymore. This was an incredibly selfish move by Michael Andrew.

Has he tested positive

Agreed. He is not the only athlete who trained for the Olympics. If he refused to get vaccinated for whatever reason, he had a choice not to participate in the Olympics as a member of Team USA. An extremely self-centered decision. Do not put other athletes and coaches that have a conscientious mindset.

Vaccinated team mates can still test positive with no symptoms and miss their races.

Yes he certainly is. If he gets a Covid positive all his flatmates would have been contact-traced out of the Olympics… Selfish does not describe it enough…

He has been infected with Covid, so better immunity than those that are vaccinated. He is not putting anyone at risk. Not wearing a mask when you are many feet away from folks, along with the immunity from being infected puts the risk of infecting someone at 0. Science folks………….

Wrong. It has already been proved that Vaccination gives better immunity than Infection. If Infection was a guarantee that someone was safe, Dean would not have caught it twice.

You are wrong. The science is out there for anyone to look at. And this is consistent with all viruses.

I guess they didn’t talk to Tom Dean

yea but dressel is the goat sprinter and we all love him. We can let that slide.

Yeah, but I think dressel is vaccinated

It was immediately after his race and he was still catching his breath with Dressel.

Isn’t the mix zone immediately after all races

Not a good day for MA.