Michael Andrew Opens Up About Decision Not To Receive COVID Vaccine 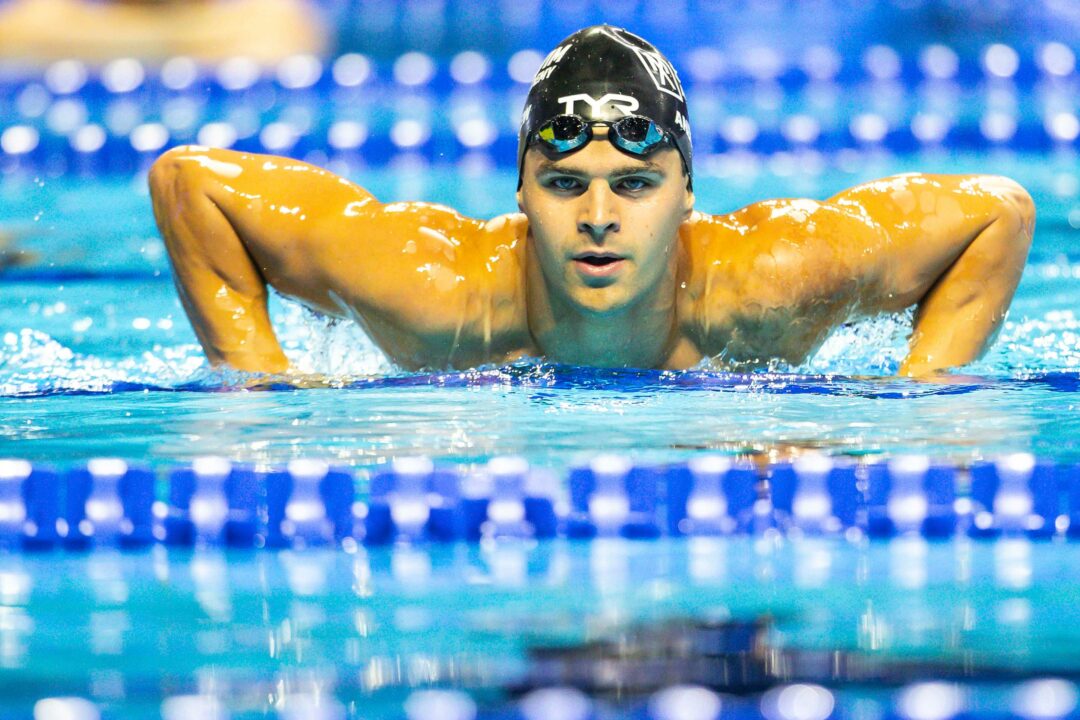 Andrew discussed his reasoning behind not receiving the vaccine prior to the Tokyo Games despite potentially putting his teammates at risk. Archive photo via Jack Spitser/Spitser Photography

U.S. Olympic swimming star Michael Andrew confirmed that he has not and will not receive the COVID-19 vaccine prior to the Tokyo Olympic Games.

Andrew, 22, reaffirmed his stance on getting vaccinated during remote media availability on Thursday from the U.S. Olympic swimming team’s training camp in Hawaii.

“I am not fully vaccinated, I’m not vaccinated,” Andrew told media via Zoom. “My reason behind it is, for one, it was kind of a last moment, I didn’t want to put anything in my body that I didn’t know how I would potentially react to.

“As an athlete on the elite level, everything you do is very calculated and understood. For me, in the training cycle, especially leading up to trials, I didn’t want to risk any days out. There were periods where you take a vaccine, you have to deal with some days off.”

Andrew is coming off a very successful U.S. Olympic Trials, qualifying to swim three individual events in Tokyo having won the men’s 100 breaststroke and 200 individual medley in Omaha and placing second to Caeleb Dressel in the 50 freestyle.

Andrew’s decision not to receive the vaccine could potentially put both him and his U.S. Olympic teammates in a precarious position at the Games—if a positive test were to arise, an unvaccinated athlete will face stricter quarantine consequences compared to those who have had the vaccine.

When asked about Andrew’s vaccination status, men’s U.S. Olympic head coach Dave Durden said: “All of our athletes, in the community that we’re in right now, we’re being very conscious being very safe with how we’re handling our teams, how we’re going from place to place, how we’re operating in our training camp environment, how we are effectively bubbling ourselves … And that’s probably the more important piece of this. Regardless of vaccinations or not vaccinated, it’s what our attitudes and actions are.”

Speaking on the swimming podcast “Inside With Brett Hawke” in January, Andrew said he had already contracted the virus and justified the decision not to get vaccinated: “So my thought pattern is kind of like, if I’ve already got it, there’s not as much health risk for me.”

At the U.S. Olympic Trials, USA Swimming President and CEO Tim Hinchey estimated “around 90 percent” of the U.S. National Team had received the vaccine.

“(Tokyo 2020 and IOC officials) are now taking into consideration vaccination status,” she said. “They aren’t going to automatically disqualify you if you are contact traced at this point (and have been vaccinated.) That was good news for us. I have a lot of concerns going into the next few weeks. The health and safety of our athletes is always our No. 1 priority. It takes on a whole new meaning this year.

“The virus is still here. It’s out there, and we’re going into an environment where we have no idea what the other population has been doing to protect themselves. That makes me nervous. We are going to do a lot to protect ourselves. But I’m nervous about what we’re going to walk into.”

Andrew’s decision not to get vaccinated has also been widely speculated as the reason he is forgoing competing in Season 3 of the International Swimming League after being the top scorer on his New York Breakers’ club (and a co-owner with his parents) in each of the first two seasons. However, his vaccination status reportedly has nothing to do with this decision.

Andrew is a medal threat in all three of his individual events in Tokyo, entering the Games ranked first in the world in the 200 IM, third in the 100 breast and fourth in the 50 free. In what will be his Olympic debut, he is also expected to feature prominently on the American men’s 400 medley relay, and potentially on the mixed 400 medley relay.

You can watch Andrew’s full media availability below:

Dr. Robert Malone, inventor of mRNA technology that’s used in the COVID vaccine, said young adults and teens shouldn’t be forced to get the vaccine; there isn’t enough risk-benefit analysis data for that age group.

4
-3
Reply
TestingTesters
Reply to  A C

“Malone clarified that he was not discouraging the use of the vaccine but was providing people with as much fair information as he could about their risks.”

Malone doesn’t think they’re unsafe. He just says that he doesn’t believe they’re being transparent enough with the data to make a conclusion about the safety.

He’s probably not wrong. I’m a strong pro-vaccine guy, I think everyone should get them so we can be done with this. But on an individual level, Dr. Malone is probably right. Not because the vaccines are inherently unsafe, but because among 18 & unders who are otherwise healthy, the risk of serious COVID complications are very very very very low, whereas the risk of vaccine issues… Read more »

What a hit piece.

Let’s keep it in the pool. It should be about swimming. Just saying.

When things like this have a major potential to affect the action in the pool it should absolutely be discussed.

Like the major impact on your long term health by injecting yourself with a untested non-FDA approved “vaccine ?” If you’re worried get vaccinate and leave everyone else alone.

His comments sound misinformed and they certainly are not based in science. Unless his personal physician says there is some specific medical reason why he should not get the shot, he should get the shot.
It’s not all about him. Community spread is an issue and previous infection doesn’t keep him from getting reinfected. He is going to an area (Japan) where cases are on the rise and the variants are on the rise.

The past is past and we can’t change the past. Should Michael Andrew be vaccinated now?

Why? Just ’cause she’s an anti-vaxxer, QAnon supporter? /s

You sound like a fascist Stewie. Anyone who doesn’t agree with you gets a label. Get a grip. There are thousands of doctors (great barrington declaration) who don’t agree with the narrative. You just live in a leftist echo chamber.

Keep spreading your anti-vax, anti-mask nonsense. Stewie’s gonna call it out every time.

His comments are informed and based in science. Just because his opinion differs from yours only means one of you is wrong.

I think that there will be many that are not vaccinated! I am actually tired of the debate on the vaccine! I am more interested in the fact that he will stand and place his hand across his chest with the National Anthem!

Per Rowdy. Hopefully I’ll be able to watch this athlete swim in Tokyo. Any guesses who he might be?

Michael Andrew needs to stay out of the Olympic Games! He is an embarrassment to the United States of America! He is at great risk to himself and others! Get a shot or get out! I know you are concerned about what this shot will do to your body? Well I can tell you that ignorance is already flowing through your body! The shot might give you insight to something bigger than you!
Just saying! 🤷‍♀️

Wow. What an ignorant statement. Someone who has worked like crazy, is a really nice and polite kid, is somehow an embarrassment? This is probably a good lesson for MA, though. Don’t talk to the media besides the typical athlete “talking points” such as “the other countries are very good, we are working hard, going to do the best we can, happy to be here”, etc.

I’m sure there’s some “pray it away”backstory going on. Love thar he made the team bur come on man. It’s freaking vaccine!

Being an anti Christian bigot is not a good look for you.