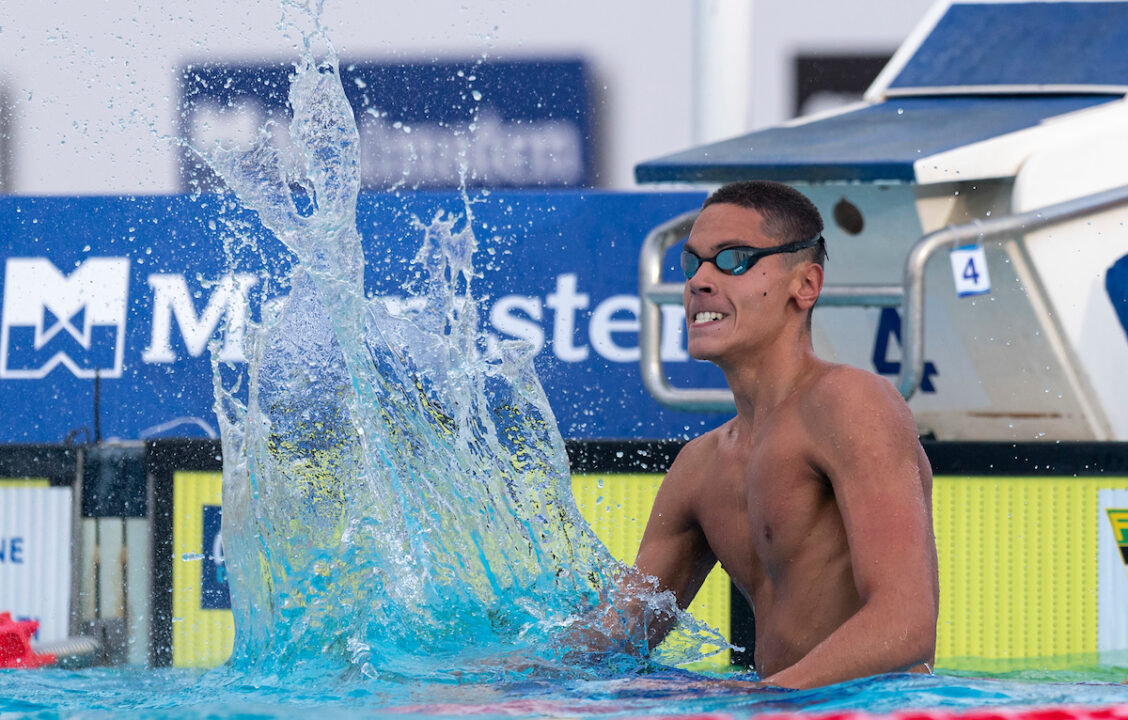 The swimming community was abuzz on Thursday after Romania’s David Popovici re-lowered his World Junior Record in the men’s 100 freestyle at the 2021 European Junior Championships, taking over the #1 time in the world in the process.

In the individual final two nights later, Popovici dropped a scintillating 47.30 to jump up from fourth to first in the world for 2020-21, leapfrogging Kliment Kolesnikov, Caeleb Dressel and Alessandro Miressi.

Kolesnikov, who had held the distinction as the fastest man in the world this season for three months up until that race, was among the swimmers offering a reaction to Popovici’s swim on social media:

Caeleb Dressel was asked about Popovici’s swim during his press conference on the 2021 Olympic media day, and he was very impressed with the 16-year-old.

Bovell compared Popovici’s way of swimming freestyle to the likes of Alexander Popov and Gustavo Borges, a “finesse” style, compared to the power stroke we’ve seen from many of the world’s best sprinters in recent years.

Mexican Olympian Liliana Ibanez reacted to Popovici’s swim the way many of us did:

Popovici will take aim at another World Junior Record on Saturday, as he’ll swim the men’s 200 free final after taking nine-tenths off his Romanian Record in the semi-finals, clocking 1:45.26. The world junior record belongs to South Korea’s Hwang Sun-Woo in 1:44.96.

what was Chalmers 100 Fr time at Trials??

47.59
He cannot be underestimated. His acceleration in the last 50m is always impressive. Look at what he did in the final of WC 2019.

The last time an American set a world record in the men’s 100 free lcm was in August 1988, when Matt Biondi swam 48.42. That happened 33 years ago, when John McClane was still gunning down German terrorists in American movie theaters (Die Hard hadn’t even premiered in Sweden at the time). Yippee-ki-yay *kids*! 😉

Talking about power sprinters we have also had Shaquille O’Neal!
https://www.youtube.com/watch?v=R54MlJSaJp4

Instead of Rowdy Gaines, we should begin with Jim Montgomery at 1976 Olympic. In the final, he became the 1st man who swam under 50, i.e 49.99 which was the new WR.

He may be a rookie, but he sure seems ready for his moment in Tokyo. The 100 and 200 free just got thrown a nasty curveball.

George Bovell’s comments echo my own thoughts I had after watching Popovici swim. Not only was his 47.30 swim possibly the single most impressive age-group swim of all time, especially at 16 (coupled with his 1:45.26 200FR), but his way of swimming seems to be one he shares with what I’ve noticed appears to be a ‘new breed’ of swimmers that harken back to days gone by. Technique driven, not necessarily power driven. I’d include Canadian Joshua Liendo (48.13 100FR and 51.40 100FL at 18), and Hungarian Kristoph Milak (needs no introduction) in this new wave, among a few others (Penny Oleksiak, Summer McIntosh, etc.), although with females it is a little bit more difficult to make the comparison due… Read more »

Bronze at 46 would be a stretch.Usually, 100 free final is a very nervous swim.Sometimes the semis are way stronger than final.

Phelps World Record at 15 is more impressive to me.

30
-4
Reply
He said what?
Reply to  TheloniusPunk

To show the strength of her records, even the East Germans couldn’t get close. They were swims for the ages – and she started setting world records at 14!!!!!

are all more impressive since they’re all from 20+ years ago and are still “age group WRs” if you will. even the 16/17 yo times are faster than what any adult can throw down today. male-female comparisons are hard to make when they’re still age groupers since they generally peak at different times, but obviously there are some exceptions. still, for every phelps/thorpe (speaking purely in terms of how prolific an age grouper they are there are), there are like 50 penny oleksiaks. if we go an apple’s to apple’s comparison, egerzegi’s 200 back and Mary t’s fly… Read more »

Thorpe was incredible for sure but what makes Popovici so impressive to me is that he is doing it in a power event like the 100fr. Even looking at the all time Olympic list with Chalmers at 18 this seems almost unprecedented. To me 16 is so far from 18 in an event like 100fr. Hope to see him go even faster in the Olympics, the 47.3 might already be the craziest age group time in my lifetime.