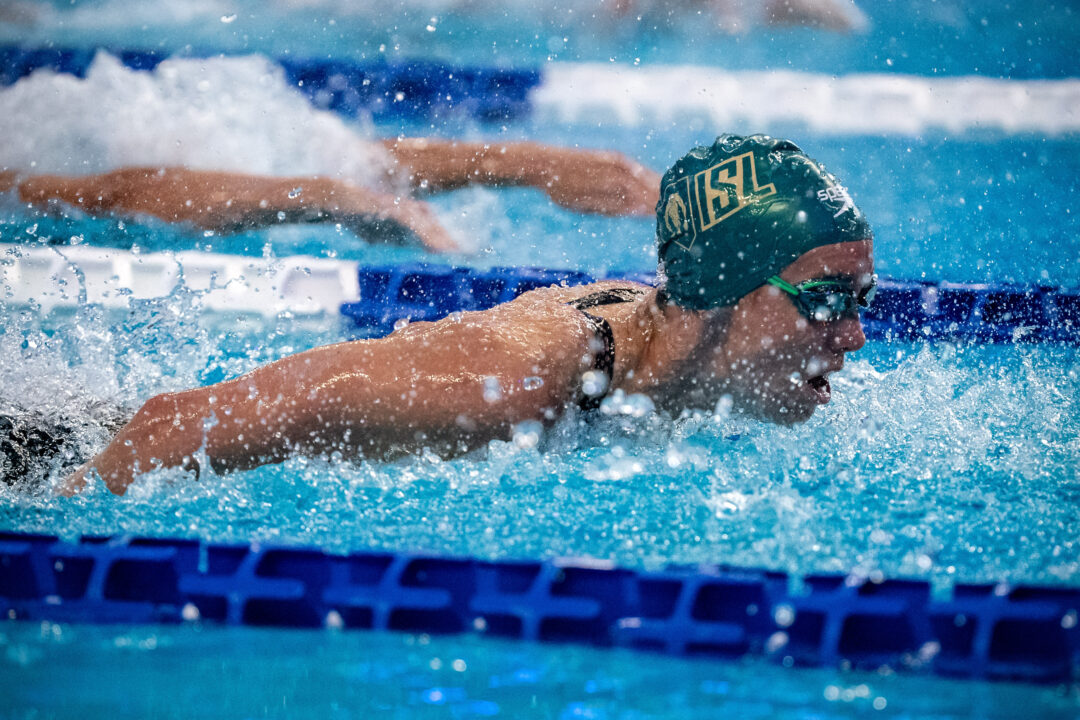 Emma McKeon and Matt Sates each collected $100,000 USD bonuses for being the top scoring woman and man throughout the 4-meet series. Archive photo via Giorgio Scala / Deepbluemedia / Insidefoto

The 2021 FINA World Cup featured a new prize money system for its 4-meet series, which the top 20 swimmers at each meet with monetary awards at each meet and then awarded a bonus to the 10 highest point-scorers series-wide.

An athletes’ score at a meet was calculated based on their top 3 performances in terms of placement within the final and FINA points (which are based on time).

At each of the Berlin, Budapest, Doha, and Kazan meets, the man and woman with the highest score won $12,000 USD, while the second-place finisher would earn $10,000, third place $8,000, and so on. The first two meet winners were Anastasia Gorbenko and Matt Sates who topped their fields in Berlin, followed by Emma McKeon and Tom Shields who finished first in Berlin. Two new winners were crowned in Doha when Kira Toussaint and Daiya Seto earned $12,000 each and then at the final meet in Kazan Emma McKeon and Daiya Seto became the first 2 swimmers to repeat as meet victors.

While $12,000 is a significant sum of money, the real prize this year was the $100,000 USD bonus that was awarded to the series-wide high scorers. Double winner Emma McKeon and South Africa’s breakout star Matt Sates ultimately walked away with the highest point totals for the women and men with 228.3 and 227, respectively.

Despite Sates’ $100,000+ in earnings, it is unlikely that he will be able to retain anywhere near that amount of money considering the stringent rules regarding prize money for NCAA athletes. Sates, who is expected to head to Georgia and race with the Bulldogs in the winter of 2022 is only permitted to accept cash awards up to an amount that would cover the expenses for each meet.

It seems like Sates is the only person within the top 10 point scorers on the men’s or women’s sides that will encounter this problem as no other swimmers are currently or expected to be racing in the NCAA. Check out the tables below for the top 10 men and women point-scorers for the 2021 FINA World Cup Series.

If we compare the earnings of the top 10 swimmers to the top earners of the 2021 ISL regular season, we see that only the top 4 earners; McKeon, Sates, Toussaint, and Shields won more than ISL top-earner Beata Nelson. Nelson earned $64,150 while racing for the Condors which was just ahead of the Tokyo Frog Kings’ Daiya Seto who earned $63,975.

Hey Tom can I borrow a few bucks? Looking to get a new ride soon.

Dusting off the backstroke to earn some dinero.

What about World Record bonus ?

I know you cannot do World Records on demand, but Chalmers record would have been worth $50,000 if it had been done at the SCM World Champs

He can still re-break it at SCM Worlds!

FINA runs both events and presumably pays for the bonus either way. Why is it different depending on the event?

Nice to see more money circulating through the sport.

Sure is, I find it a little sad when top footballers earn millions per match though, and hard working swimmers compete for peanuts…but it is what it is! And congrats to Emma, what a year!

It’s sad but sports unfortunately give zero about feelings

You gotta wonder if he’s tempted

You would have to take the cash, surely. Clearly wherever and whatever training he is doing is working so continue as normal and gain a local education to capitalise on your earning potential now would have to be the advice he is receiving.

He seems to be doing quite well under his current coach. Why go to Georgia and join a watered down group? I don’t think any of their Olympians are still training there.

The point is they tend to produce Olympians.

Nail on the head – the immorality of the collegiate system. Same applied to many, including Missi Franklin.
It is bordering of slavery – forcing people to chose between education and making a living in their chosen craft.
I bet the same doesn’t apply go paralegals paying their way though law school.
It is an absolute mystery to me how Americans (not only the swimmers… all american swim fans) are willing to put up with such totally bogus BS.
A total boycott of collegiate sports is called for.
One can understand not letting them get paid in college games/meets/tournaments, but prohibiting receipt of prize money payments in international professional competitions is outright slavery.

They can still get an education and make a living from their chosen craft they just have to pay their their way through college like your paralegal. These athletes are actually in a privileged position compared to your paralegal because they have the option of a free or subsidised education.

I think your definition of “slavery” is a little wrong. LOL

Dude, you really need to learn about actual slavery. You’re embarrassing yourself.

Weird to see all these men competing among women… But hey! At least they made Top10..

Look at the table headings…

Um, did you just assume their gender?
But yeah, cut & paste error. Kinda wish I wouldn’t see so many of those here.

When will they get their payments? After next years World Cup circuit?

Well ISL is independent from FINA I believe so the chances of swimmers competing here not getting paid is pretty much zero. The isl is very inconsistent atm

FINA is not ISL. These people will probably have the money in their accounts this week.

I know.
It was a comment on the lack of payment from ISL.

So I wondered where does this prize money come from. I looked at the FINA financial report and in FY 2019 the bulk of FINA’s income came from “FINA Events Income”. Is this mostly media rights fees because I imagine the concession stand doesn’t bring in that kind of dough.

The “Slush Fund” would only be topped up as required…..kind of like “The Cloud” that stores all our information…who knows where it comes from or goes too LOL!!

I am confused I thought the NCAA was allowing athletes to make money now?

They can make money off of their name, image, and likeness. They cant take prize money.

I think there’s a gaping loophole here. Money can be paid to the federation, federation can pay the athlete for an “endorsement.”