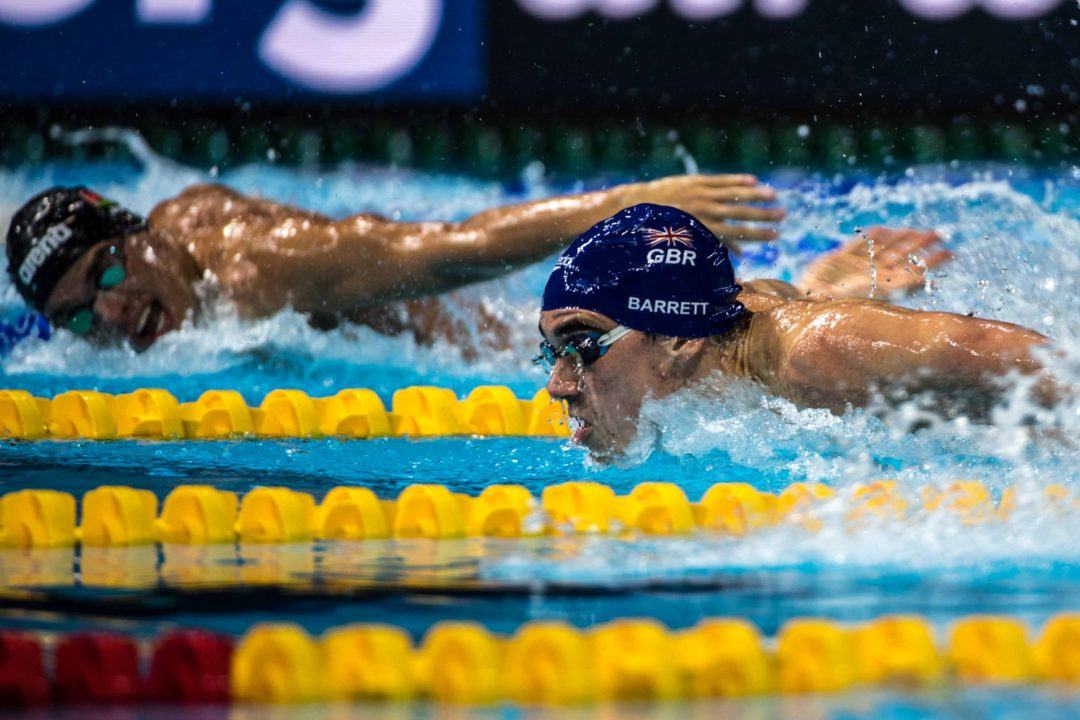 Adam Barrett (above) broke the 25-29 World Record in the 100 fly, but 90-year-old Jane Asher went on an incredible 5-record-run in Ponds Forge this weekend. Archive photo via Mike Lewis/Ola Vista Photography

A new Masters World Record went down at the Swim England Masters National Championships by a recognizable name. 39-year old Matthew Clay, in his last year of eligibility in the 35-39 age group, swam 25.21 in the men’s 50 backstroke.

Clay, who was born in South Africa but represented England and Great Britain internationally, is part of a long legacy of great British 50 backstrokers. In his younger career, Clay was the 2006 Commonwealth Games champion in the 50 backstroke. That same year he won a European Championship bronze medal in the same event.

Clay shaved .05 seconds off the prior World Record in the event, which was set earlier this year in 25.26 by Japan’s Naoya Hirano. Hirano’s primary sport is Finswimming, though he also ventures into the realm of the bare-footed racing as well.

Clay wasn’t the only former English international competing at the meet. Adam Barrett, a three-time Commonwealth Games medalist and 2014 European Champion, won the 25-29 100 meter butterfly in 51.38. That sets a new World Record in the event as well, and again is a record that was held by a Japanese swimmer – a 52.42 in the 100 fly by Yasuhiro Wada from 2018.

Barrett made an appearance for Energy Standard earlier this season during International Swimming League competition.

The swimmer who may have stolen the show, however, was Jane Asher, a former Manchester University swimmer who is currently a member of the International Swimming Hall of Fame.

Asher has broken over 100 Masters World Records and won more than 20 Masters Swimming World Championships gold medals in her career.

This weekend at Ponds Forge, she added 5 more records in the 90-94 age group, for which she is newly eligible at 90 years old.

Not only did she break those records, she crushed them. Across five events, the total amount by which she dropped the world Records was almost four minutes.

The freestyle records were previously held by another behemoth of Masters swimming, American Maurine Kornfeld, as was the 100 IM. The 100 back record was set in 2019 by Canadian Kalis Rasmussen.

Chad LeClos next to Barrett sneaking a peak, to no avail.

That’s not le clos, looks like the Belarus flag maybe