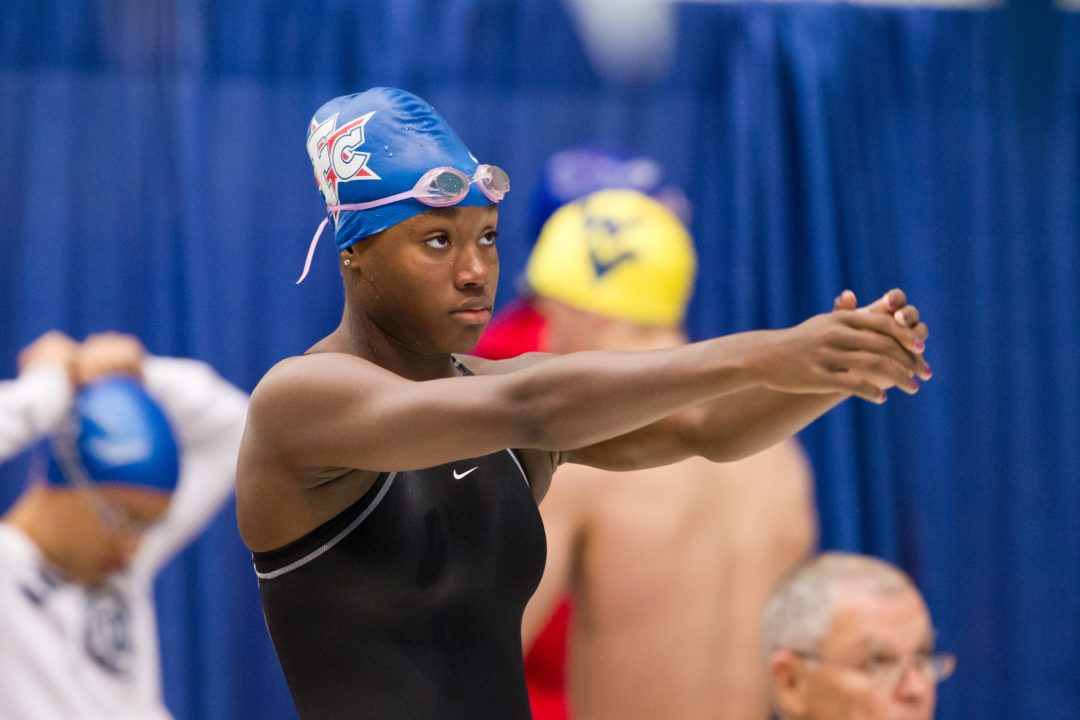 The list of 2nd-fastest performers all-time includes many legendary swimmers and former records that were once thought untouchable.

USA Swimming has lifted one of the few remaining restrictions on meet sanctioning for October, allowing LSCs to make sanctioning…

The third day of competition in Orlando at the NCSA Junior National Champions begin with some 50-yard stroke sprints, which is not a race we often see competed for swimmers of this age.

Thanks to the 200 medley relays in college, though, we do have some level of perspective for these swims, even if it’s comparing flat-starts to rolling-stars.

In the session-opening women’s 50 fly, NCAP’s Janet Hu broke a morning tie with Mary Schneider to win in 23.87, while Schneider matched exactly her prelims time in 24.04. For perspective on Hu, just a high school junior: most top college programs have butterfliers capable of 23-low or mid in the 50 fly on a rolling start. However, when a few tenths of relay start are accounted for, Hu is already in the rage of being a primary medley relay swimmer.

In third in that race was Zoe Avestruz of the Aquajets Swim Team in 24.57. Avestruz is part of an impressive group of Aquajets sprinters who made a huge dent on relay record books in the younger age groups, and look already headed in that direction now as 15-16’s.

In addition to Avestruz’s bronze in that race, another Aquajets 15-year old Olivia Anderson won the 50 breaststroke in 28.32. She and her teammate Rae Bullinger (3rd – 28.70) sandwiched another 15-year old, Kennedy Lohman, who was a 28.37. Lohman took the title in the 100 breaststroke on Wednesday evening.

The men’s 50 sprint finals were stacked with big names who embraced these races that they don’t get to challenge very often, at least in an individual sense.

Jack Conger won the men’s 50 fly in 21.08, even though he’s not on a full taper for this meet. For comparison, at last year’s NCAA Championship meet, Neil Caskey split a 20.63 on the Longhorns’ 4th-place 200 medley relay. With a relay start, that’s about where Conger would’ve come out with this swim, give-or-take, showing how valuable he will be immediately to the Longhorns next season.

NCAP’s Andrew Seliskar, a similarly-versatile swimmer, was 2nd in 21.31, and Asphalt Green’s Michael Domagala was 3rd in 21.48.

In the men’s 50 breaststroke, Austin Temple pulled off a bit of an upset with a 24.86 in the 50 breaststroke. His seven-tenths of a second drop from prelims to final is pretty impressive in such a short race. Seliskar again took 2nd with a 24.94, and those two were the only ones under 25-seconds in the race.

Back into the more traditional events, First Colony’s Simone Manuel took a 2nd event victory and a second best time with a 1:44.22 in the 200 free. She turned in a 50.5, but still had enough left to have the fastest back-half to her race as well.

Lia Neal won the B-Final in 1:45.59 after taking the prelims race a little too easily.

Kaitlyn Jones from the Delaware Swim Team swam a 1:48.04 in finals, which was slower than she was in the morning. She, however, perhaps was saving some energy for her pending battle in the 400 IM: one that was the best we’ve seen of the meet so far.

That left Jones and 15-year old Becca Mann at the front coming toward the wall. The two fought back-and-forth in the last 150 yards, and even though Jones finished very well, Mann was too tough. She took the win in 4:07.51, her second of the meet, and Jones was 2nd in 4:07.99.

Those are best times for both swimmers, and especially so for Jones: it was six seconds faster than she’d been coming into the meet.

In the men’s 400 IM, NCAP’s Andrew Seliskar, in his third swim of the day, won the 400 IM in 3:44.83. That jumps Curtis Ogren to make him the second-fastest 15-16 in history in this event, behind only the one-and-only Michael Phelps. Seliskar shows the same great versatility that Phelps had at a young age, only with an even better breaststroke (though Phelps was still pretty decent at that stroke).

Simone Manuel is the biggest young American sprint talent. The 200 free is a little bit too long for her but she’s on fire and I had predicted a 1.43 was possible. She was close to that with a new PB in 1;44.22. I want to see her 50 free now. If she’s still enough fresh she could swim under 22. Andrew Seliskar should have kept his energy for the 400 IM to swim faster. I understand there’s a team race in this meet but these 2 races he has swum before the 400 IM have cost him a little of energy. 3.44.83 is still a very good time. On Friday Janet Hu can win 2 races but she will… Read more »

You’ve got this one wrong BG. The 200 is not too long for her (?). She is nowhere near her potential in this race. She’s too young to peg.

I consider her as a sprinter and a sprinter doesn’t generally like what is over 100 yards or meters. But like Lia Neal she is enough talented to swim fast in the 200 free. And it will help her finish in the 100 free in long course. I just see her gold future in the shortest distances. 23.80 and 52.70 in 2016 for 2 individual gold medals. Perhaps I’m crazy. We’ll see.

Yes you are crazy.

Talking about ocnger’s 50 time in comparison to Caskey’s, don’t forget that conger split 20.1 at metros in fly