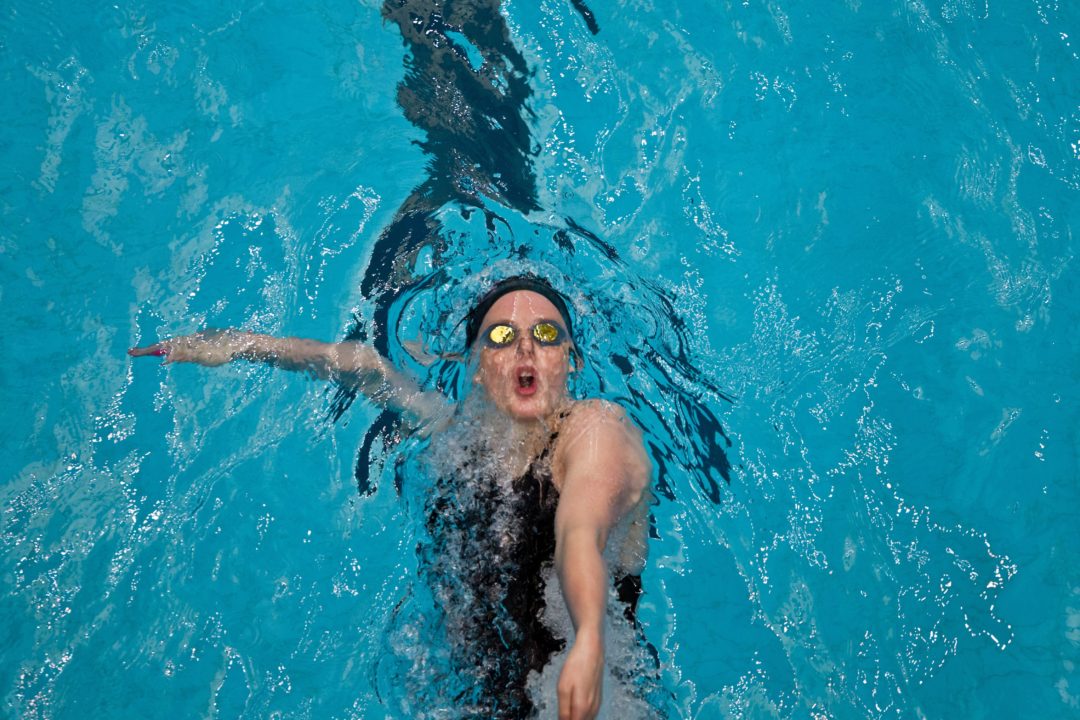 14-year old Ryan Hoffer from the Scottsdale Aquatic Club became the youngest swimmer to ever dip under 45 seconds in the 100 yard freestyle on Thursday evening, swimming a 44.81 in the men’s final of the race at the Federal Way, Washington Sectional Championship meet.

That 100 free final was loaded. Tyler Messerschmidt, who is representing the same Scottsdale Aquatic Club on his hiatus from Cal, won the race in 42.32, which is a new Meet Record (which he broke in prelims as well). The old record was 21-years old, set by Keith Anderson in 1992. Also in the race were Cal commit Long Gutierrez, who was 5th in 44.58, and Minnesota commit Daryl Turner, who was 6th in 44.70. Every swimmer in the A-Final was faster than he was in prelims.

On the women’s side, the star of the meet was Missy Franklin. She “warmed up” with a 47.28 in the 100 yard free, which breaks her own 17-18 National Age Group Record of 47.60. Among even collegiate swimmers, only Margo Geer of Arizona has been faster this season in the event, and that time moves Missy to the position of the 7th-fastest swimmer of all-time in the race (with only a few tenths separating her from a position in the top three).

17-year old Jasmine Mau from the Kamehameha Swim Club was 2nd in 49.04, and Jeffco Hurricanes swimmer Lexie Malazdrewicz was 3rd in 49.56.

Franklin’s second swim of the night, in the 200 back (1:48.42), was also a 17-18 National Age Group Record, breaking a 1:49.16 set by Liz Pelton back in 2011. Another, much more significant, Pelton record almost went down, however. Franklin’s time was .03 seconds away from the American Record set by her future Cal teammate at the Pac-12 Championships just 12 days ago. Had Franklin’s time been done two weeks earlier, it would have been a record for her. She and Pelton, beginning this fall, will be training partners under Teri McKeever, and what an incredible battle they should have on a daily basis in practice.

Another impressive young swimmer from Scottsdale, 15-year old Amy Bilquist, was 4th in 1:56.81.

Thomas Brewer from Current Swimming won the men’s 200 breaststroke in 1:58.23 – three seconds better than he’d been coming into the meet. That’s the 4th-best time by a 15-16 year old this season.

Michelle Cefal, a member of the Junior National Team, won the women’s 200 fly in 1:55.50. That’s a new Meet Record for her, and easily a best time (she was two-minutes on the dot coming into the meet). That brings her yards times more in line with her impressive long course results.

Other winners at the meet:

Amazing swims by Hoffer and Franklin! Missy’s 1:42.2 and 27.7 (breast) on the relays also impressive.

Impressive 42.32 for Tyler Messerschmidt in the 100 free. Cal must cry.
Impressive new NAG record for Ryan Hoffer in 44.81. I believe Michael Andrew has a serious target now. He’s only 13 and has swum 46.06 last week. He knows what he has to do next season. Interesting to see the 50 free. Can Ryan Hoffer swim under 20 this week? His PB is 20.45 and with what he has shown in the 100 free it’s really possible. Michael Andrew has already swum 20.94 and could do it next year. I believe Ryan Hoffer would be very proud to be the first 14-year-old swimmer to do it.