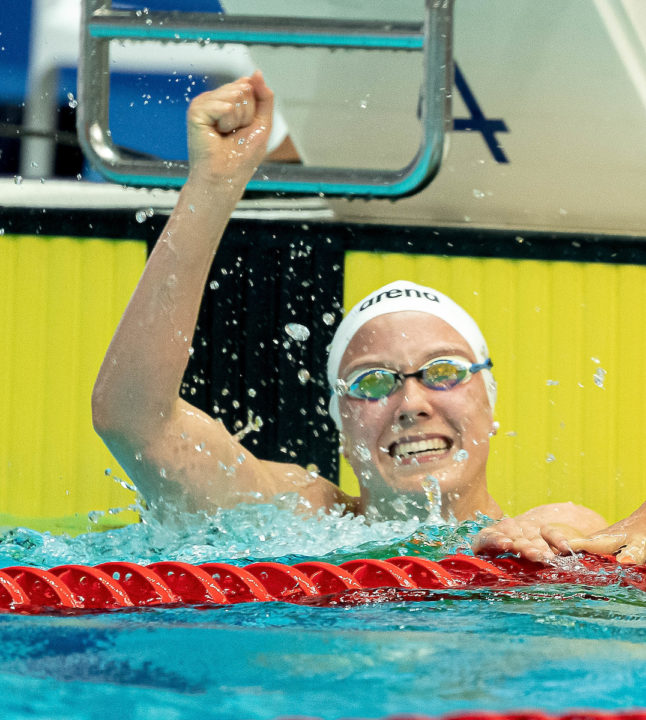 Isabel Gose moved into fourth in the world this season in the women's 400 freestyle at the German Qualification Meet in Magdeburg Archive photo via G.Scala/Deepbluemedia/Insidefoto

This weekend’s meet in Magdeburg offers a unique scheduling wrinkle. Only the 100 meter events as well as the 200 meter freestyle are being swum as prelims and finals. In the remaining events (aside from the 800 free and 1500 free), swimmers could register for finals without qualifying through prelims. The meet has been set-up this way due to the limited number of invited swimmers and because of coronavirus restrictions.

Florian Wellbrock swam a best time in the 400 free as he broke the 3:45 barrier for the first time in prelims finishing in 3:44.35. Right behind him was Lukas Märtens who posted a 3:45.71 in prelims before a 3:45.29 this evening in finals. Martens dropped nearly three seconds on the day as his best coming into the meet was a 3:48.22. This puts Wellbrock and Martens both under the German qualifying time as well as the FINA A cut in the 400. Wellbrock now ranks 3rd and Martens 7th in the current world rankings in the 400 free. Wellbrock has already qualified for Tokyo in the 800 free, 1500 free, and the 10km open water event.

The women’s 400 freestyle saw another swimmer jump up in the world rankings. Isabel Gose won the event in a personal best of 4:06.11 putting her under the German qualifying time and moving her into fourth in the current world rankings. Her previous best was a 4:06.38 swum last summer.

The women’s 1500 freestyle featured a tight race between German record holder Sarah Köhler and Celine Rieder. The two women were separated by less than a second through the 1400. Köhler, who had led the whole race, used a 1:03.96 final 100 split to pull away to finish in 16:07.71 ahead of Rieder’s 16:09.00. Rieder managed to drop 12 seconds from her previous best of 16:21.00 that she swam only a week ago. With Köhler already qualified for Tokyo in the event, Rieder was well under the German qualifying time of 16:16.00.

Franziska Hentke, the German record holder in the women’s 200 butterfly, won the event comfortably by over nine seconds with a time of 2:09.95. Hentke, who has already qualified for Tokyo, improved upon her 2:10.38 from the morning.

That’s an ominous swim from Wellbrock. Some year for Maertens too – Germany’s next sub 1.46 200 freestyler? They have the base for a very decent 4×2 in him and Heidtmann. Anybody know what is happening with Rafael Miroslaw? Looked a handy 200 freestyler a couple of years ago, but I havent seen much of him since 2019 Worlds.

Miroslaw is swimming in Eindhoven this weekend. His 50 free was pretty poor, the 200 free will be tomorrow. Before this year i thought that the relay would be Heidtmann, Zellmann (who will also swim the 200 free tomorrow), Miroslaw and Märtens. Heidtmann… Read more »

Miroslaw withdraw from the 200 today, but Zellmann and Mühlleitner both qualified for the 200m final tonight.
Zellmann qualified first with a 1:48.08 and Mühlleitner was 1:48.15 for third in the qualification. Final will be aroud 17.45 local time 🙂

Gonna be very interesting to see whether Wellbrock decides to swim the 400. His week is packed already and his coach indicated that they didn’t expect a 400 as fast as this.

I remember that he said some time ago that he doesn’t plan to swim the 400 free at the olympics. If he decides to swim it, his schedule would look like this:

He would have more than 2 days rest after the 400 free final. He would have to drop at least one second and be in top shape one week earlier then anticipated if he wants to medal in… Read more »

I don’t know… I think you need a longer taper to swim a really good 10K, assuming that he’s in great shape before starting the taper, of course (a reasonable assumption). Doing something like this might actually benefit his 10K, assuming he can recover from the 1500 in time.