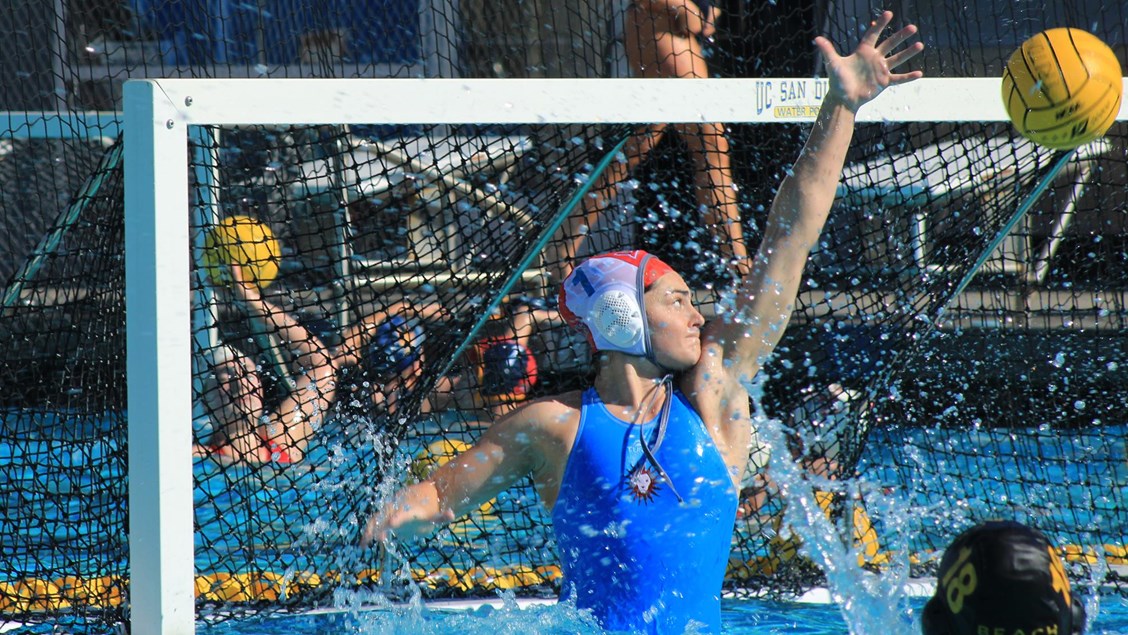 In a week full of upsets and high-scoring individual efforts, here is a look at the players selected for Week 4 women's water polo conference honors. Current photo via Loyola Marymount Athletics

In a week full of upsets and high-scoring individual efforts, here is a look at the top players selected for Week 4 collegiate women’s water polo conference honors.

Player of the Week: Alana Ponce, George Washington – Racked up 13 goals, six assists, five field blocks and five steals as the Colonels went 3-1 at the Bison Invitational; put in four goals and added two assists and two field blocks in a 12-10 win over Salem; notched four scores in an 8-6 win over Saint Francis (Pa.); dropped in three goals and three assists in a 12-5 win over Gannon; tallied two goals, two steals, two field blocks and an assist in an 11-4 loss to La Salle.

Defensive Player of the Week: Mackenzie Matheny, George Washington – Turned away 35 shots in a 3-1 weekend at the Bison Invitational; logged eight saves in an 11-4 loss to La Salle; added nine stops and two assists in a 12-10 win over Salem; turned in nine saves apiece in wins over Saint Francis (Pa.) (8-6) and Gannon (12-5).

Rookie of the Week: Brooke Hourigan, Harvard – Tallied eight goals, four steals, two assists and a field block as the Crimson went 3-1 at the Bison Invitational; notched a career-high four goals and a steal in an 11-5 win over Saint Francis (Pa.); put in two goals to go with two assists and a steal in an 18-7 win over St. Francis Brooklyn; recorded two steals in an 11-8 win over LIU Brooklyn.

Offensive Player of the Week: Malia Josephson, Wagner – Scored 21 points, including 15 goals, at the Bison Invitational; put in six goals and added an assist in the 12-8 upset win over #15 Harvard; logged six goals and an assist in a 17-8 win over #23 Bucknell; scored twice in the Seahawks’ 16-5 win over St. Francis Brooklyn; added one score in a 17-3 win over Mercyhurst.

Defensive Player of the Week: Katherine Campbell, Wagner – Made 15 saves and snagged nine steals in 12 quarters of play at the Bison Invitational

Newcomer of the Week: Jessica Dean, LIU Brooklyn – Registered 22 points, including 18 goals, at the Bison Invitational; logged six goals and two assists in an 11-8 win over Mercyhurst; scored seven times and added an assist in a 15-14 sudden death loss to Salem.

Player of the Week: Borbala Kekesi, Arizona State – Accounted for 12 goals at the UC Davis Aggie Invitational; put in four goals in a 9-3 win over #22 Cal State Northridge; logged a hat trick in a 10-9 upset win over #5 UC Irvine; chipped in three goals and two assists in a 13-8 upset of #7 UC San Diego.

Newcomer of the Week: Eszter Kiss, Arizona State – Racked up seven goals at the Aggie Invitational; recorded a hat trick in a 10-9 upset of #5 UC Irvine; accounted for one goal, two assists, two steals and three field blocks in a 13-8 upset of #7 UC San Diego.

Defensive Athlete of the Week: Hunter Olivier, Redlands – Posted a team-high five steals and scored two goals in an 11-8 win over Ottawa (Ariz.) to open the season.

Player of the Week: Cassie Anderson, Mercyhurst – Notched seven goals as the Lakers went 1-3 at the Bison Invitational; put in four goals and added an assist in the team’s  13-12 decision over La Salle; scored once in the team’s 7-5 loss to Gannon and twice in an 11-8 loss to LIU Brooklyn.