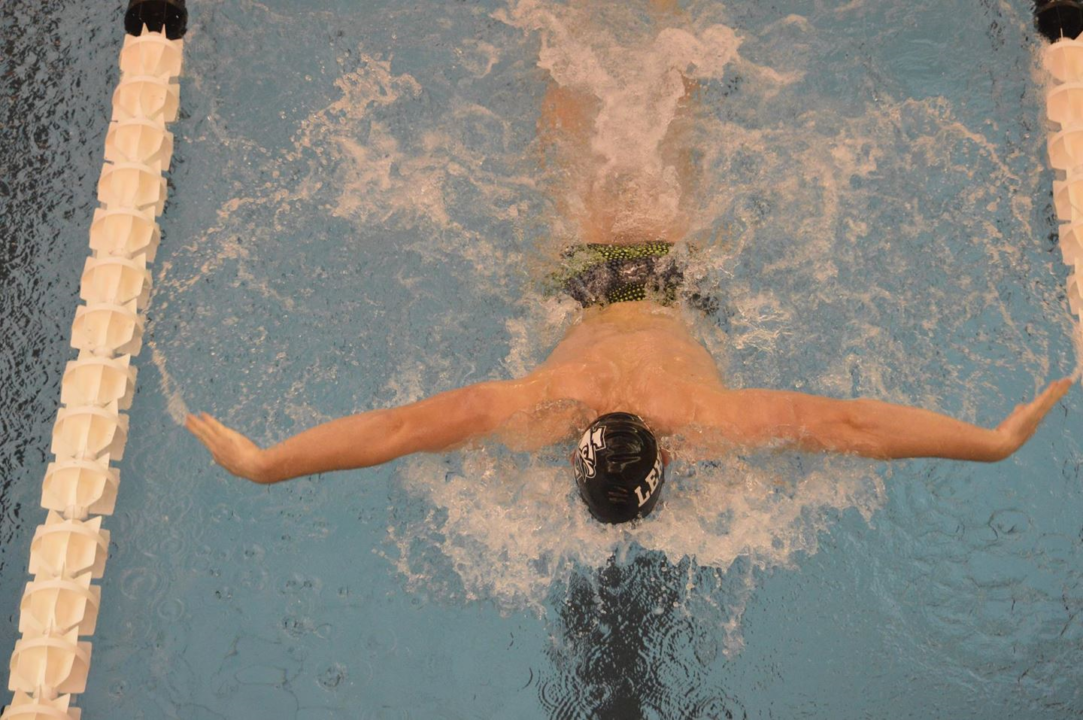 The Lehigh men and women picked up wins over Bloomsburg and host West Chester at a tri meet on Friday. West Chester in turn topped Bloomsburg. Current photo via Lehigh Athletics

WEST CHESTER, Pa. – The Lehigh men’s swimming and diving team had an impressive showing on Friday night on the road. Competing in a tri-meet, the Mountain Hawks picked up two wins on the night. Lehigh defeated West Chester, 170-72, while also picking up a win over Bloomsburg, 186-44.

Seven different Mountain Hawks won an event, as Lehigh used a complete team effort on Friday. Senior captain Walker Wilson continued his dominating start with three wins on the night. Wilson won the 200 free (1:40.93) and the 500 free (4:42.45), while also being a part of the winning 200 free relay team (1:24.86) with Greg Giannella, Caleb Eberly and Max Goldenberg.

Competing in a tri-meet, the Lehigh women’s swimming and diving team had to battle West Chester on Friday. The Mountain Hawks easily defeated Bloomsburg, 183,39, but earned a hard-fought win over the Golden Rams, 137-103.

The 200 freestyle relay team of Miles, Ann Foley, Olivia Giampietro and Evie Gieseman earned first with a time of 1:36.36.

A key reason why the Mountain Hawks edged West Chester was because of their depth. In the races Lehigh didn’t win, they earned second in those races. Freshman Sarah Hardy finished second in the 200 IM (2:08.77) and 200 butterfly (2:03.56). Megan Judge earned a second-place finish in the 100 free with a time of 52.70.

The Mountain Hawks will swim again tomorrow at Rider at 6:00 p.m.

Nadia Mulder (Hummelstown, Pa./Hersheiy), who hit a pair of national qualifying marks last week in the season opener at Southern Connecticut State, turned the same trick on Friday at home. She placed first in both the 1-meter and 3-meter diving competitions for West Chester.

Julia McCarthy (Bethlehem, Pa./Liberty) finished ahead of the pack, taking first place in the 200 individual medley.

West Chester was back inside Graham Natatorium Friday night for its home opening tri-meet with Division I Lehigh and Pennsylvania State Athletic Conference rival Bloomsburg.

The Mountain Hawks proved to be too much for their DII competition, picking up wins over both the Golden Rams, 170-72, and Bloomsburg 170-70. West Chester split the tri-meet by topping PSAC rival Bloomsburg, 166-70.

Logan Brockway (York, Pa./Dallastown) placed second in the 200-yard individual medley and helped the Golden Rams reach first place in the 400 medley relay. Dylan North (Airville, Pa./Red Lion), last year’s swimmer of the meet at the PSAC Championships, took second in the 100 Freestyle, second in the 500 free and third in the 200 backstroke.

Carter Smith (Clarks Summit, Pa./Abington Heights) placed second off the 1-meter diving board and second in the 3-meter dive for the Golden Rams as well.

West Chester hits the road on Friday, Nov, 1 for the Thomas Murphy Invitational at Loyola (Md.) in Baltimore. The Golden Rams will face John Hopkins, Loyola  and Drexel.

WEST CHESTER, Pa. – The Bloomsburg University women’s swimming team opened the 2019-20 regular season at West Chester University on Friday night with a tri-meet against the Golden Rams and Division I Lehigh University. The Huskies fell to West Chester, 177-59, and suffered a 183-39 setback against the Mountain Hawks. Bloomsburg had some excellent early-season swims on Friday night as the Huskies totaled 14 Pennsylvania State Athletic Conference (PSAC) qualifiers.

Sophomore Liz Jackson (Mechanicsburg, Pa./Cumberland Valley) joined Cubbler as a qualifier in the 200-yard freestyle as she posted a time of 2:00.72 to finish eighth overall on Friday night. Junior Lindsay Mooney (Salisbury, Md./Parkside), meanwhile, joined Park as qualifiers in the 100-yard freestyle as Mooney touched the wall in 56.17 for an eighth-place result. In the 200-yard backstroke, senior Kiera Wadsworth (Blakeslee, Pa./Ridley) was the Huskies’ top finisher as she placed eighth with a time of 2:13.32 – just ahead of McHugh’s ninth-place finish. Freshman Alicia Lehman (Pittsburgh, Pa./Keystone Oaks) made it three qualifiers in the event as she finished in 2:16.13 to place 11th overall.

The Huskies’ 200-yard freestyle relay team also had a strong swim on Friday night as they took third overall with a time of 1:39.16. The foursome consisted of Park, Mooney, Cubbler, and Hubric.

The Bloomsburg University men’s swimming team opened the 2019-20 regular season at West Chester University on Friday night with a tri-meet against the Golden Rams and Division I Lehigh University. The Huskies fell to West Chester, 166-70, and suffered a 186-44 setback against the Mountain Hawks. Bloomsburg had some excellent early-season swims on Friday night as the Huskies totaled 18 Pennsylvania State Athletic Conference (PSAC) qualifiers.

Freshman Luke Emig (Horsham, PA/Hatboro – Horsham) and sophomore Pat Agnew (Pottstown, Pa./Pottsgrove) joined Hummel as conference qualifiers in the 50-yard freestyle. Emig posted a time of 22.05 while Agnew was right behind in 22.22. Senior Sean Finias (Cherry Hill, N.J./Cherry Hill East) made a return to the pool and posted a PSAC-qualifying time of 2:03.93 in the 200-yard butterfly. Junior Jordan Wyant (Mechanicsburg, Pa./Trinity) and freshman Luke Scoboria (Birdsboro, PA/Exeter) joined Hummel as qualifiers in the 100-yard freestyle. Wyant swam a time of 49.25 while Scoboria was right on his heels, touching in 49.27. Freshman Blake Nesbitt (Wind Gap, PA/Nazareth) qualified with Schnars in the 200-yard backstroke after swimming a time of 2:02.15.

In the 500-yard freestyle, freshmen Ryan Keenan (Collegeville, Pa./Perkiomen Valley) and Jimmy Greek (Garnet Valley/Garnet Valley) joined Smith as conference qualifiers with Keenan posting a time of 5:02.94 while Greek touched in 5:04.23. Junior Chris Gleason (Philadelphia, Pa./Father Judge) was the Huskies’ final qualifier of the night as he posted Bloomsburg’s best time in the 200-yard breaststroke with a time of 2:17.29.

The Huskies will be back in action on Saturday, October 26, as they host Susquehanna University at the Nelson Field House Pool on Homecoming Weekend. Action is scheduled to get underway at 11:00 a.m.