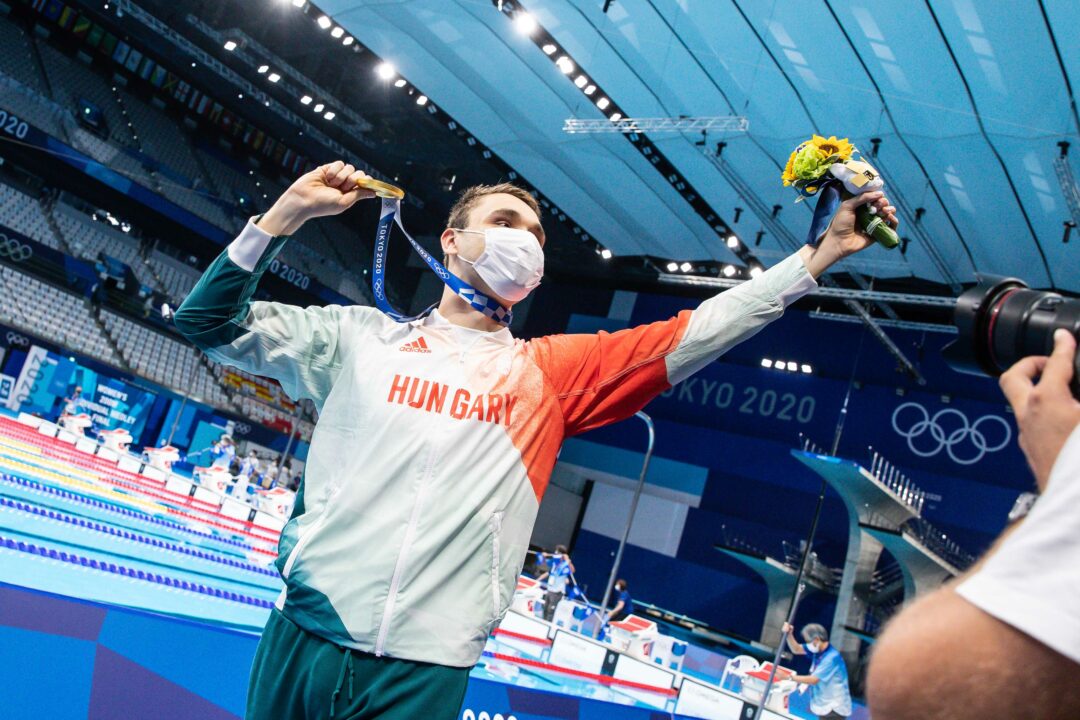 Check out what Hungary's Kristof Milak had to say after dropping under 50 seconds in the 100m fly to place 2nd behind American Caeleb Dressel. Current photo via Jack Spitser/Spitser Photography

Anyone watching the 7th day of finals here in Tokyo was treated to a shiny new World Record in the men’s 100m fly, courtesy of American dynamo Caeleb Dressel. However, Hungary’s Kristof Milak, the man who already bagged 200m fly gold here decisively, also dipped under the 50-second threshold.

For the first time in his career, 21-year-old Milak crushed a sub-50 outing of 49.68 to check in with a new European Record. Entering this meet, Milak’s previous best rested at the 50.18 he produced at the European Championships. With his result, Milak is now the 2nd fastest 100m fly performer of all time.

After the race, Milak and his coach Attila Selmeci spoke to the press about what future 100m fly prospects.

“Let’s face it, a year ago if someone said Milak was going to swim 49.6, not many of us would have believed him. The difference between the two of them [Milak and Dressel] is getting narrower, if Kristóf continues, it is possible that the world champion will no longer be Caeleb Dressel next year, but Kristóf Milák.

However, Selmeci expressed groundedness about the 200m fly future as well.  “And in the same way, someone can show up at 200, just as he exploded at 100 now. Such is the sport, once at the top and other times you have to climb back from the bottom. No one knows where such talent will emerge, but I am confident that we can maintain our top spot in the world at 200.” (Index Hungary)

Selmeci and Milak have been a coach/athlete duo for 8 years, of which Selmeci expressed,  “A lot has changed during this period, perhaps the most important thing is awareness, it has become much more conscious, I can safely say that.”

The coach said that Milak has ‘become very receptive and open, perhaps more accepting of criticism when he had refused to do so before.’

From Milak himself, the swimmer spoke of his 100m fly performance. “Yeah, I smiled because it was a great race, with great opponents and a brilliant swimmer. It was really an excellent swim now, maybe I left a tenth at the wall, but I don’t think I could come any better now, so I’m proud that Caeleb needed a world record to win.

“In the spring, especially at the European Championships, several foreign swimmers told me, listen, you can do it, you can catch Dressel. I replied, don’t have fun with me, it’s an impossibility.

“Now, however, I have seen that there is a reality to this, and it gives tremendous motivation. Maybe even a little bigger, but definitely different from what I have to prepare for the two hundred, as it seems, at the moment I can only compete with myself.”

Regarding the postponement of the Olympics, Milak said the year delay worked to his advantage,

“I certainly couldn’t have swum one hundred like this last year. That’s all I could do to get stronger, work on my speed, and that’s a good sign to continue.”

Definitely a possibility, I didn’t even think he’d break 49.8 in the 100, but he smashed that. His back half was incredible there, wish his suit didn’t rip before the 200, could’ve gone 1:50 low or even 1:49 high. Although, Dressel’s turn and finish were reeeally bad, so you’ve got to wonder what he could’ve gone if he had hit those.

To be fair to Dressel, he lost like .2 or .3 on his turn and finish. But if anyone is going to beat Dressel here in the future, it’s Milak.

24
-4
Reply
There's no doubt that he's tightening up

I hope Milak decides to pace a prelim/semi swim like 2003 Phelps just so we can see a 25 point second 50.

He was so close to it here!

I mean, that’s a totally fair assessment by both a swimmer and coach who feel very good about the progress they have made

I think we have to remember that Dressel has had the weight of the world on his shoulders. The expectations put upon him by others and himself have been enormous, and he’s handled it spectacularly.

I believe Dressel will NEED to up his game. The youngsters like Popovic and Hwang are coming strong on their steps. I would not be surprised if one of them(or Kolesnikov) breaks 47 next Worlds. Not only Milak(only 21), but even some guys underperforming(like Minakov, only 19 years old) can step up their game in the next round of hard training.

I think he’s maxed out his game, because his advantage is his start and his insane ability to do multiple races. It’s not like his start or his training are going to get better, or that guys will stop gunning for him in isolated events. He got outswum (minus the start) by both Chalmers and Milak — and by a lot. The question is more whether Chalmers and/or Milak (or Popovici or anyone else) can improve their start and/or top-end speed.

I think it’s unpredictable. Dressel seems to be a superhuman: pure perfection, strength, precision and execution and Milak is a water creature, hugely talented to fly in/on the water. They have very different strengths

I think there’s a difference in mentality. For Dressel, it was all about Tokyo, he knows history shows Paris is likely to be past his peak powers.

Dressel’s winning margin in the 100 isn’t that of someone who’s untouchable.

Milak smokes cigarettes supposedly. Maybe give those up to beat Dressel.

That was awhile ago. This comparison is flawed. These days, every little thing matters.

So did Jenny Thompson

Where did you get that information?
I highly doubt that’s true.

index equals a e-newspaper in my country hungary.

Index is an unreliable source and I’m being polite here. I seriously doubt that it’s true!

If that’s true, it’s absolutely insane. Even 1:50 with healthy lungs is absurd.

Or maybe the right dose and right timing of nicotine is a muscle vasodilator and can enhance performance?

Any source? I doubt it is true

way back when, a lot of swimmers in Hungary – Olympic medalists smoked. Light smoking will not have any effect for a 20 year old. (light – occasional, not daily). Of course there is no healthy amount, over 0.

I will search for Tamas Darnyi, Norbert Rosza, Karoly Gutler…. and Zoltan Halmay.

I can imagine Milak might have the odd cig on a night out with his mates after a big meet, in Europe it’s not viewed differently to drinking. But there’s no way he’s chuffing 20 a day.

the most fascinating piece of the interivew is when he talks about how he is completely clueless about how to communicate with Milak, some days he feels Milak rejects everything he says, sometimes he senses that Milak is more open, but still very little gets across. He feels that Milak is a complete mystery He=the coach who spent nearly a decade with him every day.

in a previous article, his father talks about how forgetful he is. He regularly forgets his passport, gear, they have to sneak him onto the plane to make it to a competition. He is a goofball too, always funny, never takes himself seriously. Yet, a world record holder
https://index.hu/sport/2021/tokio/2021/07/28/milak-apja-bevallalja-a-100-pillango-aranyat-is/