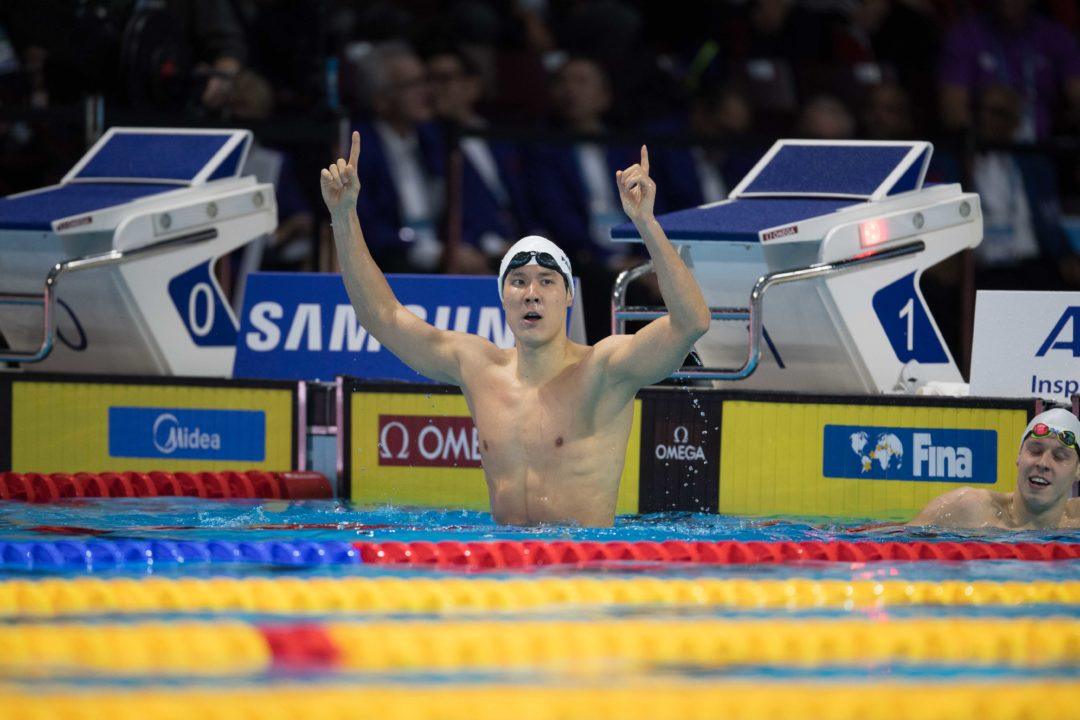 Park is riding momentum from a very successful World Short Course Championships in Windsor, where he grabbed gold in the 200m, 400m and 1500m freestyle events. Archive photo via Mike Lewis/Ola Vista Photography

We’ve taken a look at several swimmers’ provisional meet entries for the 2017 World Championships, including Spain’s Mireia Belmonte, Hungary’s Katinka Hosszu and South Africa’s Chad Le Clos, but are continuing to take stock of where athletes from around the world stand entry-wise just 10 days from the start of the pool swimming competition in Budapest.

Korea’s Park Tae Hwan had several options available to him for Budapest, as the 27-year-old qualified across his freestyle mid-distance events at this spring’s Arena Pro Swim Series in Atlanta. In addition to his usual 200m, 400m and 1500m freestyle specialties, the 2008 Olympic champion also notched a FINA A cut in the 100m freestyle this season. In Atlanta prelims, Park clocked a speedy 48.62 to easily fall under the 48.93 qualifying standard and also check-in as the Korean’s 2nd fastest time of his career.

Per the provisional entries within the FINA app for Budapest, Park intends to race the 100m freestyle. He’s ranked well outside the top 10 in the world. But, given the fact the sprint event is situated on Day 4, after his more medal-likely 400m and 200m freestyle events starting on days 1 and 2, respectively, racing the 100m free prelims may keep Park fresh for the 1500m battle set for later in the meet. He’ll need to bring his absolute A-game to land on the podium in that grueling event among the likes of China’s Sun Yang and the Italian partners in crime of Gabriele Detti and Gregorio Paltrinieiri.

But then again, Park is riding momentum from a very successful World Short Course Championships in Windsor, where he grabbed gold in the 200m, 400m and 1500m freestyle events, collecting a new Asian continental record

Park will not be swimming the men’s 800m freestyle in Budapest, per the app, an event that was part of the newly-added line-up for Tokyo 2020.

Pro Park comments have an insane amount of upvotes, we got lots of shills

haven’t seen so many votes before. Even Schooling’s news won’t beat it.

This article is probably linked to on a fan site or something.

I am just stunned that people give any serious credence to the Big Lie that Park’s chiropractor injected him with testosterone without his knowledge.

Assuming that you have no more knowledge of this matter than what’s publicly available, I assume you’ll agree that the authorities accepted Park’s argument because of a lack of evidence otherwise. To call his arguments lies and second guess the judges’ decision is not helpful as we simply do not know more than they do. Speaking of “Big Lies”, Ryan Lochte was exposed and rightly sanctioned because people actually know that his account was contradicted by what the authorities unearthed.

Didn’t the police lie when they said he made a false police report even when he didn’t file any report?

0
0
Reply
Amazing who you choose to villainize

If this was about Efimova there would be 100’s saying he is unfit to race that he should be banned. How
Is this different to her. He took drugs. He is
Found guilty. All of your are fairweather and two faced and villainize whom ever you choose. You are just as guilty as everyone taking drugs.

Personally I don’t have a structured opinion as to whether we should completely re-integrate athletes who had been sanctioned and have served their punishment. My bottom line is, however, we need to be consistent in applying standards, regardless of the sportsperson’s background. Based on available public information, Park’s case is different from Yulia’s case on a technical level (negligence vs. deliberate fault). Hence I do hope people can establish contextual evidence before applying (hopefully consistent) standards.

Literally every single time anyone gets caught they blame someone else

It’s cause Yulia is Russian and Yang is Chinese. Also no one in the community at least as far as I know has said anything about Park’s doping. Park is from a country that the U.S. Is on great terms with so people here will defend him as opposed to Russian and Chinese athletes

He overcomed many difficulties in past years.He proved that he is too strong to be beaten,not only in the Games.I hope the future will be bright.

The haters are jealous…… park will win gold!! #gopark

The past is the past…. park is training hard and killing it! Gold medals in sight… go park!

Agreed, Yulia and Sun for gold