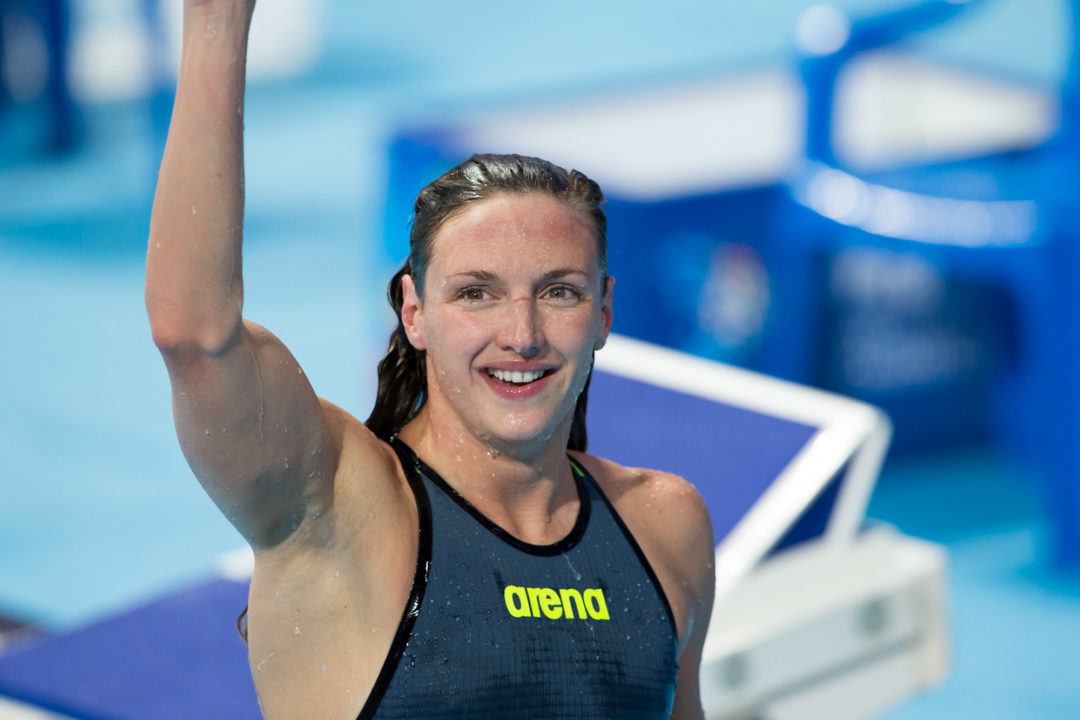 It’s a new year, a new Olympic quad, and the same old Katinka Hosszu. The 28-year old Hungarian has entered 6 individual events at the upcoming World Championships that will be hosted in the capital of her home country later this month: Budapest, Hungary.

Hosszu is known for Herculean event schedules, including having at times entered every single event at a meet. She’s been slightly more measured in her championship efforts, though she’s excelled with schedules that few other swimmers would dare contest.

Hosszu’s list this year is actually one bigger than her Olympic list, at least individually. In Rio, she didn’t enter the 200 free, but is scheduled to swim the race in Budapest. Hungary is entered in all 5 relays for which Hosszu is eligible (400 free, 400 medley, 800 free, 400 mixed medley, 400 mixed free), but no indication has been given yet as to whether she’ll swim any of those races. In Rio, she also swam on Hungary’s 800 free relay that finished in 6th place. Swimming for a home crowd could be enough to convince her to swim more relays, however – she would be a part of the best possible combination on each of those 5 thanks to her skill and versatility.

If Hosszu were to swim her full schedule of individual events, she would have only one session off – Saturday, July 29th, during the prelims session, she has no potential races. If she were called into 400 mixed freestyle relay prelims, though, that gap would go away as well.

I think she has definitely has gold locked up in both IM events, but not sure about others. I think she can probably podium in the 2 backstroke events, but I don’t see her getting past Masse in the 100, and Seebohm is my favorite for the 200. Think she probably also has a good chance in the 200 fly, but I think the 200 free is less likely. But I suspect that she has been training like a beast for her chance to shine at home, so I might be totally underestimating her.

She has NO chance in the 200 fly. Hasegawa is swimming 2:06s consistently in season, and Mireia is the defending Olympic champion. She’ll be lucky if she can even get by her countrywoman Szilagyi. If there’s any event she drops, this will be the first on the list.

I will literally my speedos if Hosszu win 200fly

Funny. Reading the replies, it appears at least 10 of you either coach Hosszu, or are Hosszu herself.

Have the initial entry lists been released?

It’s on the FINA app!

After seeing that, I’m even more keen on the prospect of a 400im upset.

Upset will be for the Silver and Bronze.

Upset? Leah Smith wins with a new world record after swimming 6600 meters before the final!
I didn’t even know she trained for IM before US championships!
More seriously, Dee, you have a name in mind for a possible upset? The Japanese girl?

Have you ever seen an easier 4:31? Her backstroke is effortless. She’s the future of the 400 IM.
https://www.youtube.com/watch?v=8gryq62m7tk

Do Asian coaches train their swimmers to have backstroke that beautiful? America has a great backstroke tradition, obviously, but no one’s backstroke LOOKS like hers or Irie’s or Xu Jiayu’s. They’re flying and don’t look like they’re even trying hard! She has basically no underwaters in that IM.

Amazing swim. If only she had the same power as Hosszu, she could break the WR.

Shiwen’s London first three strokes were pretty effortless too, though

She will drop the 200 free. It would be insane to do differently. She will probably not do it but she should also drop the 100 back in my opinion. Weird to write that about the olympic champion. 😆

She will swim both backs.

The Olympic champion dropping 100 back in front of home crowd? Are you out of your mind? 🙂 It will never happen.

What is beautiful that we are talking about what she will or will not swim. She is so versatile that almost anything is possible. I am also worried that she will try too much especially in front of a demanding home crowd (and it is demanding believe me), but we will see. This could be the peak of her carrier or it was Rio…who knows

The schedule is also speaking.

It’s the very same that she had in Kazan. Hope they have learnt from it (scratching a promising 100 back, meaningless 200 free and not making the 200 fly final) and from the stupid 800 free relay in Rio.

Not absolutely the same, there are little differences. She always swims every event (heats, semis) as her life depands on it. It’s not the best approach for a long week. I think she lost that 200, there wasn’t any tactics in that race at the end of the week. She shot her very last bullet 60 meters before the end. I was really sad about it.

To the many Hungarians present here on swimswam 🙂 , is there a chance, even small, that she could retire after that meet if she has a great meet? I know she has launched her pro swimmer’s union and there’s Tokyo in 3 years but it would be a great way to retire on a high note after winning multiple world golds at home in front of her supporters.

And a French who knows the most about swimming 🙂

Answer my question please. I know you are Hungarian and you love your Katinka! 🙂

I love every Hungarian swimmer (and some more) as all the Magyars who are here.

You never get a vote down from me so it’s no use to write like this 🙂 Otherwise I think there’s no chance.

No use to write like this? What do you mean? 🙂 And about the downvotes, it’s nice from your part but you must know that I don’t care at all about these stupid things. I never use that up/downvotes tool. If I have something to say then I reply.
Thanks for the answer. No chance. Ok.

By the way who else here is Hungarian apart from you? Rockjano? Riez?

Nice to meet you!

Me too. I rather afraid of Gyurta retiring. I think he needs at least a medal for not doing it.

I knew it, but nice to meet you too. And Laci?

Not very insightful by Bobo so suggest this might occur. She has too much invested and is still going great. Needs to keep her name out there to make $.

Relays: she won’t swim 400 free, could swim mixed medley final, 800 final and wont swim mixed free.
Individual: IMO she’ll swim 200 free prelims and skipped the semis, and swim all the others.
Free: day 5 AM and 7 AM

She will skip the 200 free. She will perform in 5 individual race: 4 gold 1 bronze

The backs aren’t so easy as were in Rio and she could loose the more safer 200. Only the IMs are in the pocket.

Everybody would be really really happy in this case. (At least 3 Magyars have been here already, including me 🙂 )

A bronze in W4X200 relay not out of the question. USA would need to break or miss the bus to the pool not to win and CHN looks a clear 2nd but the likes of AUS & CAN are dramatically weaker than in Rio, there is no SWE 4X200 this year and am not sure JAP is fielding a team either.

Yes, we discussed it some weeks ago. 3-6 is possible for Hungary. Jakabos, Verraszto, Kapas, Kesely can reach the final and after the (possible) 200 fly final Katinka will swim, I think (hope).