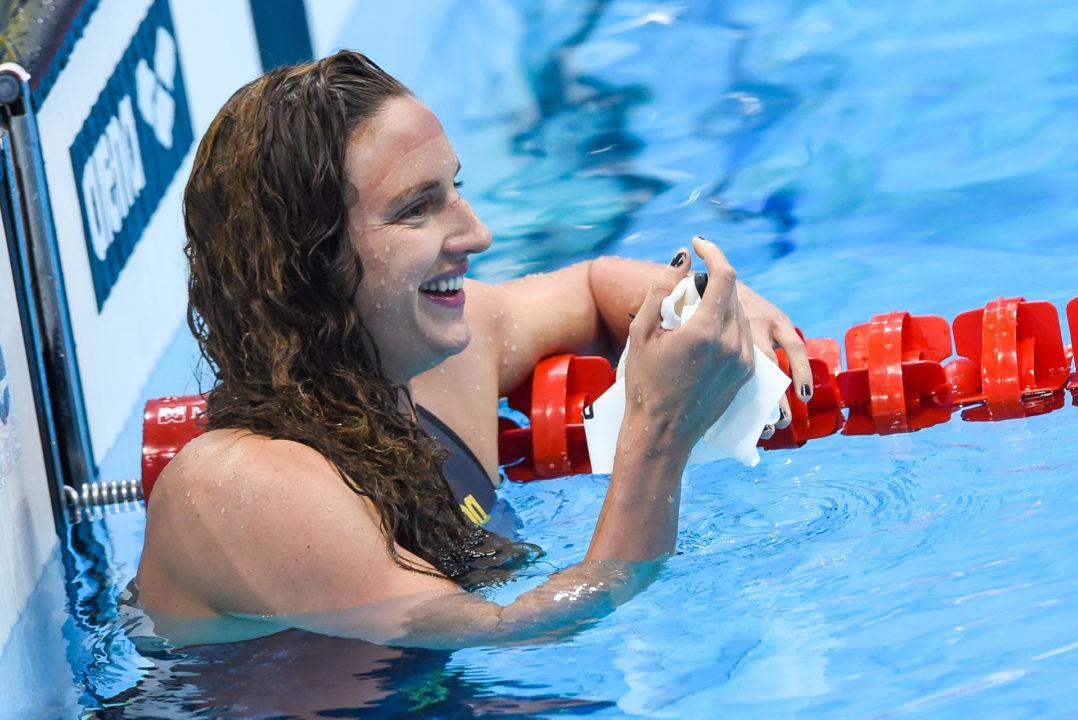 That means she won’t swim the 100 fly (which is not a big surprise) or the 200 free (which is a bigger surprise). That 200 free is the one event she’ll knock from her list of those that she raced at last summer’s World Championships. There, Hosszu placed 5th overall in the final, and also ranks 5th in the world so far this year (faster than she was at Worlds).

This year, however, with Sweden’s Sarah Sjostrom returning to the 200 free, and American Katie Ledecky and Italian Federica Pellegrini swimming well, podium spots have become even harder to come by. That, combined with a potential triple on day 3 of the Olympic schedule with the 100 back final and the 200 IM semi-final, forced Hosszu to make a choice, and that choice was dropping the 200 free.

Hosszu will instead focus her efforts on the other 5 events, including the 100 back. At the World Championships last year, Hosszu was the fastest swimmer in the prelims of the 100 back, but scratched the semi-final of the race.

Despite earning 9 long course World Championship medals in her career and holding more World Records (6) than any other woman in the world, Hosszu has still never won an Olympic medal.

Relay entries still haven’t been fully released yet, but there is a chance that Hosszu will add an 800 free relay swim to her 5 individual event lineup.

Meira belmonte tops them all, not ledecky. Any swimmer that swims the 400im at a high level is basically an iron man or iron woman already. What makes belmonte top hosszu is her additional 800 free race.

Belmonte,s 200im, 400im, 400 free, 800 free, 200 fly is the most brutal individual schedule among the female swimmers. Knowing belmonte, I am surprised she didn’t add open water swimming. Maybe she,s scared of the state of Rio,s waters.

She did try to add 10k open water swimming. She swam in Open water selection meet in Setubal, but finished 28th:

I agree with you that Mireia’s schedule is the most brutal of any swimmer in Rio.

She did try to add open water but failed to qualify.

On the other hand Sjostrom’s load is even tougher: four individual events plus relays. She probably wants to strip Hosszu with that “iron” title. Those two ladies are obviously very thirsty for medals and are trying to compensate at this time everything they missed at prior Olympics.

I think she can still get faster in 200 free if she applies the same training and focus on the event. However, the schedule and the depth of competition of 200 free makes it less attractive for her.
200 free has been her 5th best event at best.

Mark thanks for that link. In my opinion, the best way to allow caster semenya,s competitors to be competitive with her is to allow them to dope with testosterone to caster semenya, s levels of the hormone. That way it becomes a fair competition.

Just wondering if any other Olympian besides gymnastics enters that many individual competitions in Rio.

Don’t know about doping but to be the anti doping tests are out of wack. In track and field Caster semenya was tested before the 2009 IAAF world world championships and was allowed to compete. She won the gold medal in the 400 meters race in that 2009 championships with a time of 1:55:45 which is a very fast time.
She improved her pb by 7 seconds in less than nine months.(in the 400 meters distance)

She made a mind boggling improvement of 25 seconds in the 1500 meters distance in that same time frame.
However it wasn’t until grumbling by her competitors that the IAAF decided to test her. Her competitors were suspicious about her gender.… Read more »

Transgender =/= doping. This might explain why some “women” never dope and still produce other-worldly performances in sports.
Interesting Read:
http://fittish.deadspin.com/should-there-be-testosterone-limits-for-women-in-athlet-1778330172?utm_medium=sharefromsite&utm_source=Fittish_twitter

Caster Semenya ran 1:55.33 last week in Monaco.
She is going to run 400 in Rio as well, and definitely can win it.
Bobo will have a meltdown if Semenya beat Felix 🙂