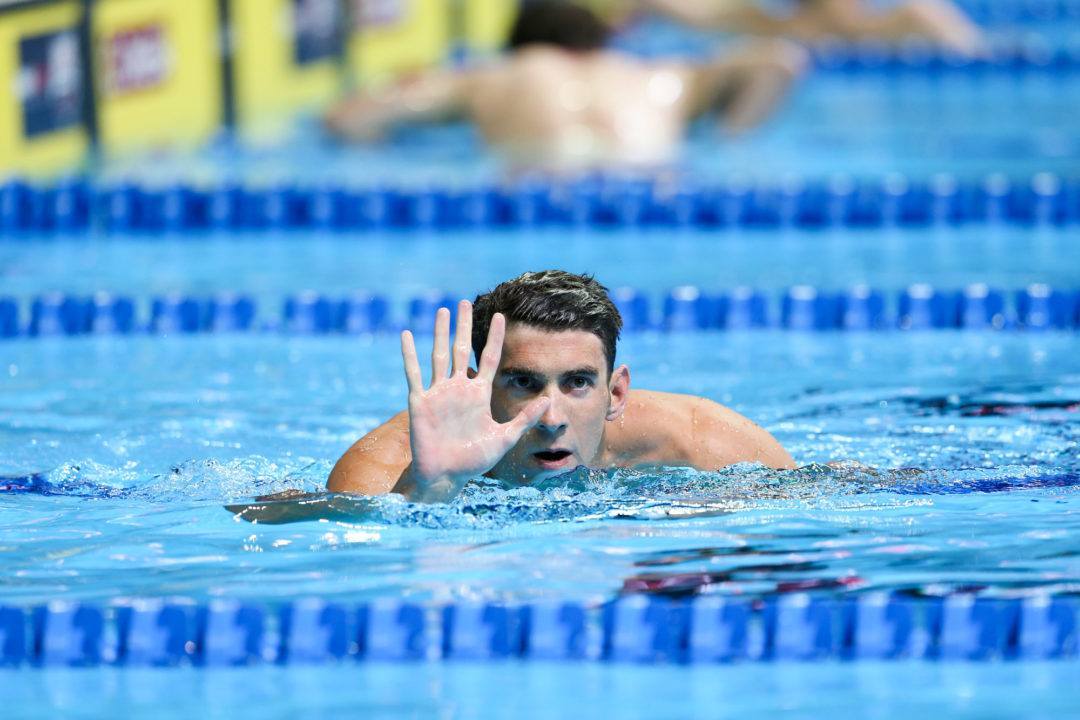 For the first time in his 5-Olympic career, Michael Phelps will be a captain of the U.S. Olympic Swim Team in Rio. Archive photo via Tim Binning/TheSwimPictures.com

For the first time in his long, storied, and incomparable career, the winningest Olympian in history Michael Phelps has been named a captain of the U.S. Olympic Team.

The identities of the 6 team captains (there were only 5 in 2012) were revealed on Tuesday as the Olympic swim team finalizes it’s week in San Antonio and prepares to head to Atlanta for its ultimate Olympic preparations.

While Phelps’ career has earned him nearly every accolade available to a swimmer, team captain has never been one until this year – further highlighting the observed change since an arrest and stint in rehab in 2014. Now a father, the 31-year old Phelps has said, with no reservations, that 2016 will be his last Olympic Games.

The captains, which USA Swimming elects for every major international travel team, are voted on by their teammates.

Between the six Captains, after Rio, they will combine for 19 trips to the Olympic Games. None of the 5 captains from the 2012 Olympic Games made the team in 2016, meaning that the group, despite their experience, are all new to this moniker.

In 2000, he was a talented rookie
In 2004, the best in the world, but still not the most experienced.
In 2008, I think he should have been one, but I see why they didn’t.
In 2012, He was slacking off, and not really motivated.
In 2016, Perfect! He has so much experience, and is still the best in the world CURRENTLY and EVER for the men. I think Ledecky is in a different position now. But this could easily change in Rio.

Three if you include Beisel’s orange.

Orange is the new black .

With the videos, the captain role and maybe the flag bearer role, I hope he still finds time to focus on his swimming.

Aww..poor MP. All these strenuous, time-consuming extra activities means he won’t be able to break WRs in Rio 🙁

I doubt Phelps is focusing on his swimming. The other day I saw him sleep for 8 hours. That’s A LOT of time off from swimming and training!
And I don’t think that’s the only time he does it!

8 hours is usually what a grownup needs. AND he is a swimmer. And Bob Bowman is his coach. Nuff said.

Shocking no Ledecky or Lochte in this. I feel like they are more than deserving of this honor.

Why is it shocking? Especially about Ledecky. She’s only 19. It’s also not about how many WR you have broken. It’s about who the team feels comfortable to lead/mentor/motivate the team, i.e. who they can do go for perhaps personal issues, motivation, etc.

I agree.
Phelps was not even voted as team captain in 2012 despite having accomplished the GOAT title in Beijing.

A good group for sure.
I know in years past, Phelps wasn’t considered for captain in part because swimming 7 or 8 events doesn’t leave any downtime to mentor teammates. This could be a sign he won’t push for free relay spots – I think he wants to contribute something more than just maxing out his personal medal count.

I like seeing these results. Especially as this is voted by the team, it gives some clues about the internal dynamics within the team. Happy especially for the women selected, as they did not have the easiest time in Trials but clearly are respected by their peers.

This. The youngest captain is Beisel, who is 24 yo.

plus beisel has been on the national team since she was what, 13?