Olympic Star Michael Phelps Is Out Of Rehab 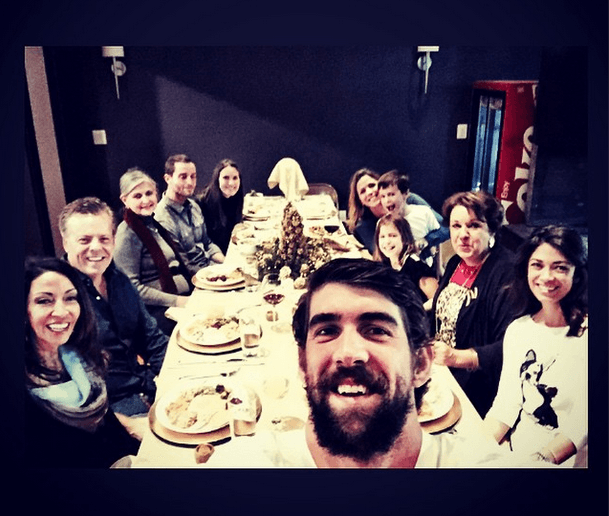 After Phelps second DUI arrest, he entered a treatment center. Phelps is now out and spending time with family.

Phelps did, however, post the above photo on his Instagram account 4 days ago, with the caption “What a great thanksgiving dinner with family!!!” tagging his mom, his sister Hilary, and his girlfriend Nicole Johnson in the photo.

USA Swimming banned Phelps from competition for 6 months, and also knocked him off the Long Course World Championship Team.

Presently Phelps appears happy and healthy. He did not attend the 2014 Golden Goggles held Nov 23rd where he was honored with the award for Male Athlete of the Year.  Phelps’ North Baltimore Aquatic Club trainer accepted the award on his behalf.

Any French fans here? Please confirm this for us. Thank u.

update…..
a fan saw MP working out at the gym this afternoon. if this is true, Phelps is officially back to the grind. 😀 yippeeeee
GO MP!

This picture said it all: “I’m doing great. I love my family.”

Michael – when will we (grandpa & I) see you competing again? Please give it one more shot at the Rio Olympics. Seriously, if anyone can four-peat, it’s YOU Michael Phelps! I bet my house on it. 🙂

yay, we get to see MP’s latest pic….finally. 😀
i believe that Phelps still has goals in his mind and that there’s no way in hell is he giving up his goals. since he’s the greatest of all time, he should feel amazingly good to be back in the pool training.
watch out world….. MP is back! 😀

I hope play with michael phelps

He looks healthy and happy in that picture, which bodes well for his swimming. And if he swims completely clean (i.e., without any alcohol in his system) from here on, he should come back faster than ever.

I’m glad he’s recovering and wish him the best, but if LeClos is swimming 10K meters in between prelims and finals like another article was suggesting he’s a lock for the 100m/200m fly baring injury in 2016.

It seems to much. I hope he doesn´t overtrain like Lochte in London. I´m still hoping for an amazing match!

Justin Thompson… what article you were referring to? do you have the link? 😀

Swimhistorian, can you give us an historical example of a world class male swimmer that has swum faster at age 30, than he did at age 24? Legitimate question…….please try to exclude the suit era.