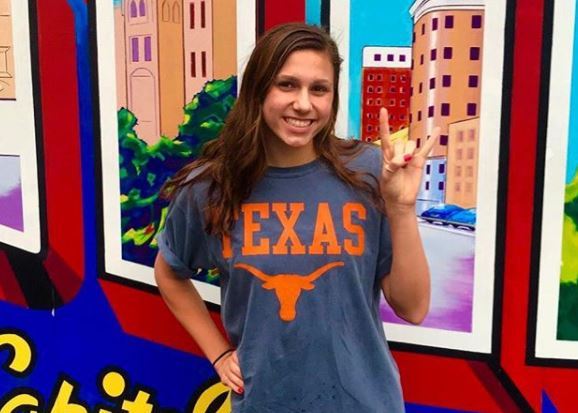 In the 200 fly, Pash roared to a 1:55.67 to win the event by 3 seconds and drop over a second from last weekend's personal best. Stock photo via Kelly Pash

Texas freshman Kelly Pash continued the impressive start to her season last night in College Station, winning 3 events and going 2 more personal bests. In her debut for the Longhorns last weekend, Pash went lifetime bests in the 200 fly and 400 IM. Last night, she again dropped in the 200 fly, also clocking a best time in the 100 fly. In the 200 fly, Pash roared to a 1:55.67 to win the event by 3 seconds and drop over a second from last weekend’s personal best. With the swim, Pash now holds the #2 spot in the NCAA this year, behind only Louisville’s Grace Oglesby. Pash then swam a 52.76 in the 100 fly, winning the event and posting yet another personal best. That time currently stands at 6th in the NCAA this season. Pash then finished up with a 1:58.55 in the 200 IM, winning the event in her first 200 IM of the season. Her 200 IM time currently stands 4th in the NCAA this season.

COLLEGE STATION, Texas – The No. 8 Texas Women Swimming Diving team took down No. 16 Texas A&M in College Station on Friday night. After the 3.5-hour drive, Texas won nine events, including a 1-2 finish in both the 1000 free and 200 IM.

COLLEGE STATION – No. 16 Texas A&M women’s swimming & diving fell to No. 8 Texas, 165-133, in an exciting rivalry meet at the Rec Center Natatorium Friday night. The Aggies battled throughout the night but were unable to steal the advantage.

The Aggies travel to Houston to battle Rice on Saturday, November 9th at 1 p.m. Follow on Twitter for updates, @aggieswimdive.

Quotes
Head Diving Coach Jay Lerew
“I was really proud of Charlye [Campbell] because the girl from Texas is the NCAA Champion and she just picked her off, so that’s going to be a big confidence booster for the next few weeks.”

Women’s Head Coach Steve Bultman
“We had some really good swims, I was pleased with how we raced. In a lot of races, we were better than what we were two weeks ago and that’s what we talked about. We want to improve, we want to make progress, we want to fix some of the things we didn’t do right two weeks ago and keep moving on.”

Way to go Kelly! You make Carmel proud! And to the naysayers…lol have you seen this girl? Kelly is phenomenally gifted and I’m not at all surprised at her early season success. She has no weakness. The sky is the limit for this girl. Keep going Kelly!!

didnt know it was taper season!

Dang. Pash looking good at Texas. Let’s see if she drops more when they taper.

She won’t, unfortunately. It’s not that she won’t drop with a taper, it’s that Carol either doesn’t taper period or doesn’t know how to

I know that’s why I said let’s see haha.

I think these comments are tired at this point. Carol has coached many swimmers to great NCAA meet tapers. They have had 2 bad big meets in a row, but saying she doesn’t care about NCAAs or doesn’t know how to coach a taper is unfair.

Lookin like the Vols girls will win SEC this year?