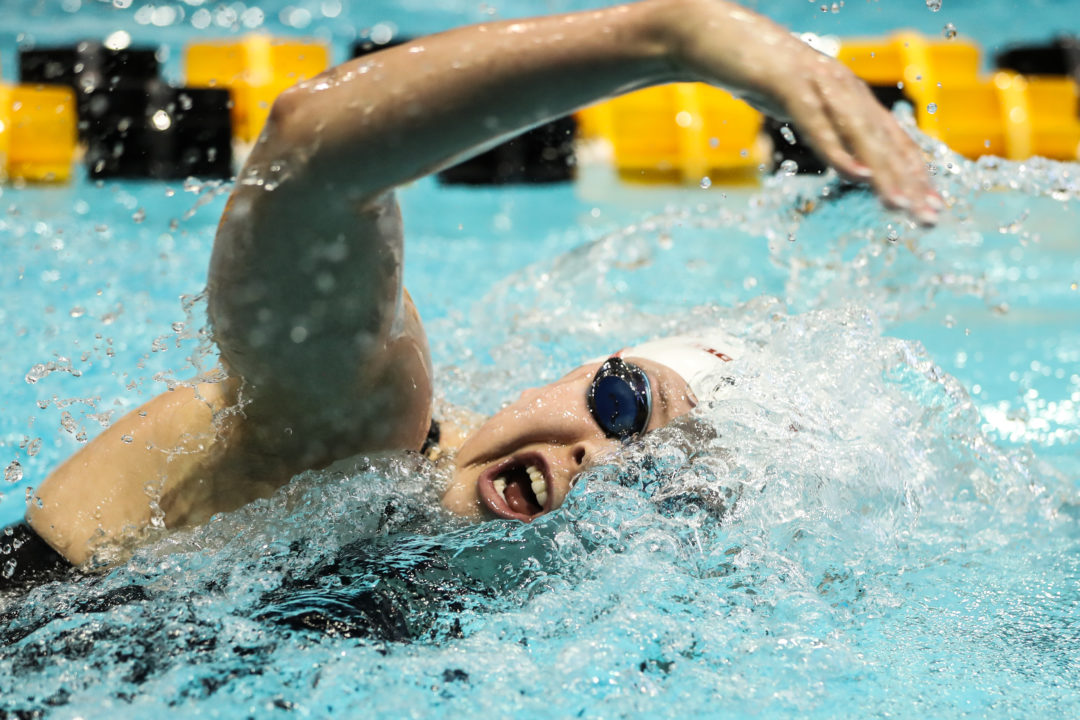 Ober, a Hoosier freshman, has had a lifelong passion for creating art, and has found more time to pursue it amid the COVID-19 pandemic. Archive photo via Andrew Mascharka/Indiana Athletics

Like every swimmer in the NCAA, Indiana’s Ryley Ober had her world turned upside down when the COVID-19 pandemic hit the US and cancellations, university shutdowns and travel restrictions started coming fast and furious.

Ober, who has now wrapped up her freshman season with the Hoosiers, was getting set to attend her first NCAA Championship meet before it was cancelled on March 12.

“On Thursday we were training for NCs, I was supposed to go there on the 800 free relay, and then Friday I was booking a flight home,” the Bradenton, Fla., native said in a phone interview. “Everyone’s back at their house, thankfully everyone that I know is safe, healthy, so that’s been a big blessing. But it’s really thrown everything out of cycle.”

In this time of uncertainty for everyone, Ober has been able to spend more time on a lifelong passion.

“I’ve been doing art my entire life,” the 19-year-old said. “I was definitely one of those kids in elementary school whose favorite hour of the day would be art class. So I’ve always loved it. But then I got more serious about it in high school, I did some local art competitions and got some small scholarships for it.”

Initially planning on pursuing illustration or something similar as her major in college, the six-time Florida 2A State Champion recognized that art was more of a way for her to disconnect.

“I realized, art for me is more of a release,” she said. “And once it turned into a job or something that was like work, it kind of took away that excitement or happiness that it brought.”

Now a journalism major, Ober admits it’s difficult to keep up with her artistic exploits amid the busy life of a student-athlete, but she always manages to find a bit of time to do it for herself.

“I try to make sure, at least on the weekends, to take, even if it’s just 10-15 minutes, just sit down and do some sketching or something,” she said. “I know it brings me joy and I think it’s really important for everyone to take the time to do something that’s just for them that brings them joy, and it can help with the rest of the stressful situations. Whether it be in the middle of a pandemic, or just normal student-athlete life.”

Ober, who has also developed a love of photography over the last few years, has been painting a lot since the pandemic came into effect. She points to one specific piece of art, one of a sea turtle, that stands out as a recent favorite.

“It kind of means a lot to me because through all of this one of the silver linings was that I was able to come home and see my family again,” she said. “I live in Florida, so we have a lot of sea turtles, and it just kind of represents coming home for me.”

Ober admits that her freshman year was full of challenges, both for the Hoosiers and her personally. But, she knows that enduring all of these difficulties ultimately will make everything sweeter in the end.

“This was a tough season, I mean, freshman year I think for most people is really tough,” she said. “Given everything that’s gone on, we’ve been through a lot. And I think one of the things that we as a team like to focus on, is the more you go through, the stronger you will rise. We’ve been through a lot, but it’s bonded us together in a way that I know next season we’re going to rise stronger than ever, and we’re going to be a force to be reckoned with.

“Personally, I had a couple of injuries this season, so it wasn’t exactly what I wanted. But, as I said, the more you go through, the better the success will be at the end of it.”

Already with a qualifying spot locked up for the Olympic Trials in the 200 free, the former member of the Sarasota Tsunami Swim Team was planning on staying in Bloomington for the long course season. But now, with the Olympics and therefore the Trials moved to 2021, everything remains up in the air — though she still plans to return to Indiana for training when practices open up.

“Definitely looking forward to getting back to the team as soon as possible and training,” she said. “I was planning on training up there for long course season through Trials. But now it’s kind of like, we don’t really know because everything is very iffy right now for everyone.”