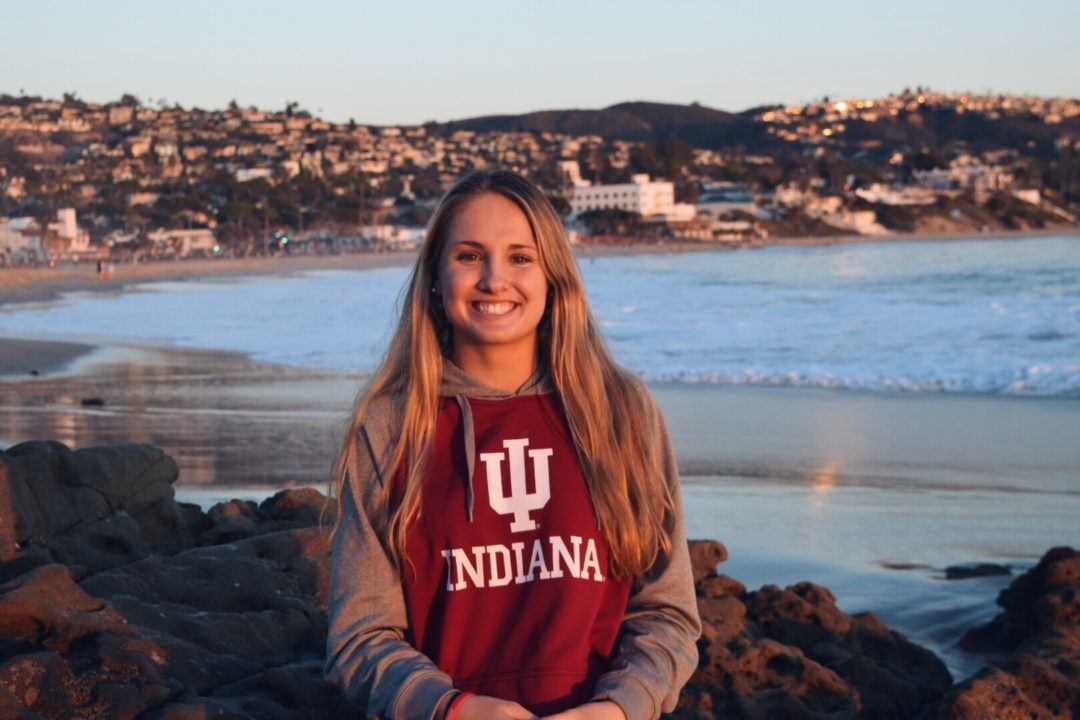 Ristic posted a season best 1:45.87 for the top time in the 200 free by nearly a second. Stock photo via Ella Ristic

The prelims session of the CIF Division 1 Sectional was held on Thursday, May 2nd. The finals session will take place on Saturday, May 4th.

One Division 1 meet record was broken in the prelims session, coming in the final event – the boys 400 free relay. The Loyola boys team of Connor Lee (44.10), Emmett Pernecky (44.83), Nolan Wang (46.71), and Mark McCrary (45.69) combined for a time of 3:01.33. They slid in just under the previous meet record of 3:01.53, setting Loyola up nicely to re-break the record in finals. Lee also posted quick times in his individual events. He first took 4th in the 50 free, clocking a 20.67, finishing just behind Aaron Lee of University (20.66). Brian Lou of University posted the fastest prelims time (20.31), and Servite’s Christian Martinez was 2nd in 20.54. Lee then turned around and took the top seed for finals in the 100 fly, the next boys event. Lee clocked a 47.58 to set a new season best and touch the wall first by nearly a second.

Similar to Connor Lee, Santa Margarita junior Anicka Delgado also took on the 50 free/100 fly double. Delgado earned the top seed for finals in both events. She first swam a 22.79 in the 50 free, touching as the only swimmer to break 23 seconds. Freshman teammate Lindsay Ervin was 2nd in 23.08. Delgado then swam a 54.52 to just beat out Marina senior Sage Matsushima, who touched in 54.54. Not far behind was a tie for 3rd between Woodridge senior Jamie Yeh and Santa Margarita freshman Isabella Abrajan, who finished in 54.73.

Another freshman that made waves was Harvard-Westlake’s Ronald Dalmacio, who took 3rd in the boys 100 fly (49.02) and 2nd in the boys 100 back (48.82). Dalmacio was just 0.01 seconds behind the top finisher in the 100 back, Canyon-Canyon Country senior Kevin Childs (48.81). Dalmacio also provided quick splits for the Harvard-Westlake relays. He led off the 400 free relay in 45.62, the 2nd fastest lead-off split in the field. He also anchor the 200 medley relay in a blistering 20.08, the fastest split in the field.

Hannah Farrow (Fountain Valley senior) took the top seed in the girls 200 IM, swimming a 2:02.88. The time was the fastest in the field by almost 2 seconds. She went on to take 2nd in the 100 breast by a narrow margin. Valencia-Valencia sophomore Ana Izabella-Adame posted the fastest 100 breast of the prelims session, touching in 1:01.87. Farrow was right behind, finishing in 1:01.92, with nearly a 1 second gap between them and the rest of the field.