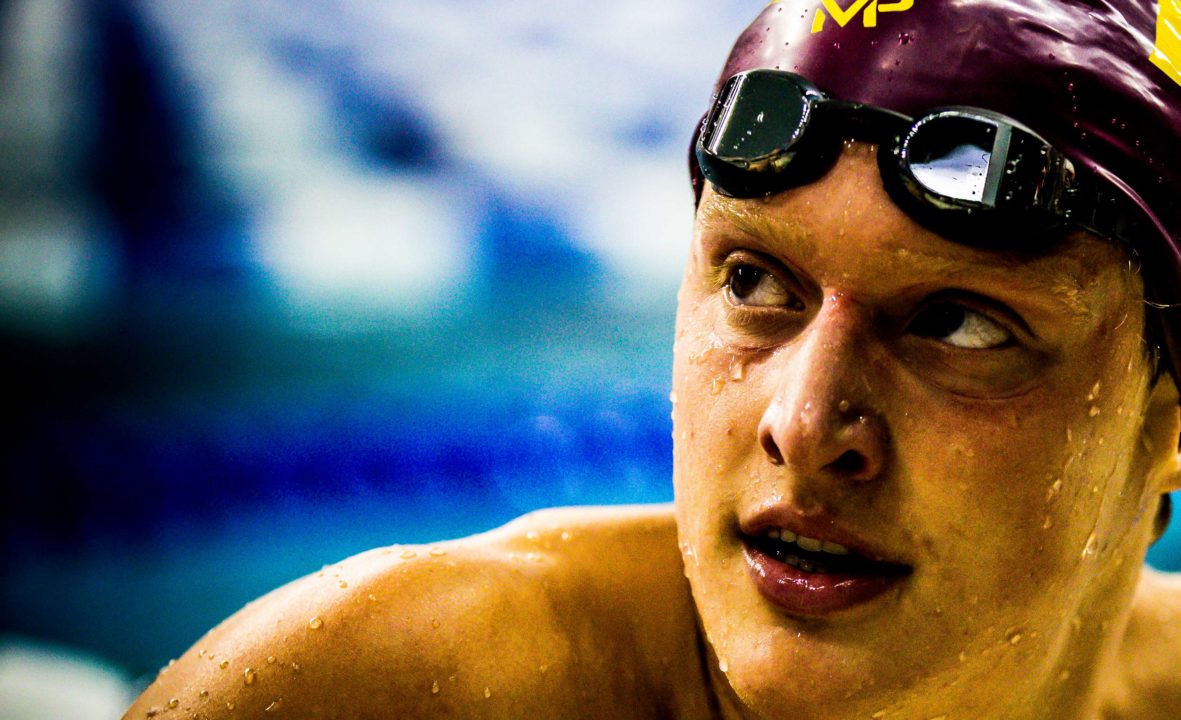 In order to accommodate every swimmer on their team, the top group at Asphalt Green trains Saturday-Thursday, with Fridays off.

The third day of the spring Western Sectionals meet featured another new meet record as Arizona State swimmers continued to pick up wins. ASU, which has red-shirted the 2020-2021 NCAA season, has sent a substantial roster to this meet. The meet features a unique scheduling wrinkle as preliminary heats are being held at three different venues across the greater Phoenix area while finals are at one location.

Kennedy Noble of the YMCA Westside Silver Fins picked up her second win of the meet. Noble was out ahead early, flipping at the 50 nearly a second ahead of the next swimmer. Her lead would lengthen during the second 50 as she finished in 52.07, about half a second off her best of 51.51 from February. Greer Pattison of the Scottsdale Aquatic Club was second in 53.90 and Riley Lexvold of ASU was right behind with a 54.00 for third place.

In the men’s 100 back, Sam Tenhulzan of Cougar Aquatics was the only swimmer under 24 seconds at the 50 turn. The rest of the field caught up over the second half of the race. 16-year old Keaton Jones of Swim Neptune, the top seed from the morning, got his hand to the wall first to win in 49.61. Jones’s prelims time of 48.74 was within a tenth of his best of 48.67. Tavis Siebert, a freshman at Cal, took second in 49.70, breaking 50 for the first time. Parker Hughes of SAC was third in 49.97.

As in the men’s 100 free from yesterday, the 200 final featured all eight lines occupied by Sun Devils. Grant House picked up his third win with a meet record time of 1:32.21. This was a personal best for House whose previous best of 1:32.29 came nearly two years ago at the 2019 Men’s NCAA Division I Championship. Julian Hill (1:32.93) and Cody Bybee (1:33.46) placed second and third respectively, both with personal best times.

Mia Rankin of the Phoenix Swim Club had a dominant swim as she won her first event of the weekend. Rankin, who placed second in both the 1650 free and 200 IM this weekend, dropped over five seconds in this event. Her best time coming into this meet was a 4:15.63 from 2019. Rankin swam a 4:14.98 in prelims before dropping an additional four seconds to finish in 4:10.28. Nora Deleske of ASU took second in 4:14.78, about three seconds off her best time. Noble would have her second top-3 finish of the night, placing third in 4:17.00

Arizona State would again place two swimmers in the top three in the men’s 400 IM. Sun Devil Alexander Colson had the lead after the butterfly leg at 50.80. Colson’s lead would be nearly 1.5 seconds at the halfway point. Jarod Arroyo of ASU would make his move during the third 100. Arroyo out split Colson by over three seconds on the breaststroke leg to take the by 0.16 over Colson at the 300. Arroyo would pull ahead during freestyle to earn the win in 3:45.81, dropping .12 from his previous best of 3:45.93 from earlier this March. Colson’s second place time of 3:46.46 was a best time by over six seconds. Rounding out the top three was Daniel Matheson of SAC who broke 3:50 for the first time to finish in 3:47.69.

House would earn his fourth win of the meet with a personal best of 19.46, dropping two tenths from the 19.66 he swam two weeks ago. House’s ASU teammate Jack Dolan was second in 19.81, off his best of 19.40 from last year’s Pac 12 meet. Jeremy Graunke of Rio Salado crashed the Sun Devil party to take third place in 19.82. Graunke dropped .15 seconds from his previous best of 19.97 from November.

Gotta say that it’s super cool to see a lot of the ASU swimmers going best times! This season can’t have been easy for them and that has to be nice 🙂

No worse than other teams except they were deprived the NCAA season…..by their own choice! Still not sure why?

Not if he is anywhere close to his 2016 Trials performance in the 200 Free. That was a 1:54 in a seeded heat. Too his credit, he is swimming well in a difficult year. I wish him luck.

That was five yrs ago. Good chance that doesn’t happen again.
He has been 146 in LC. Will see