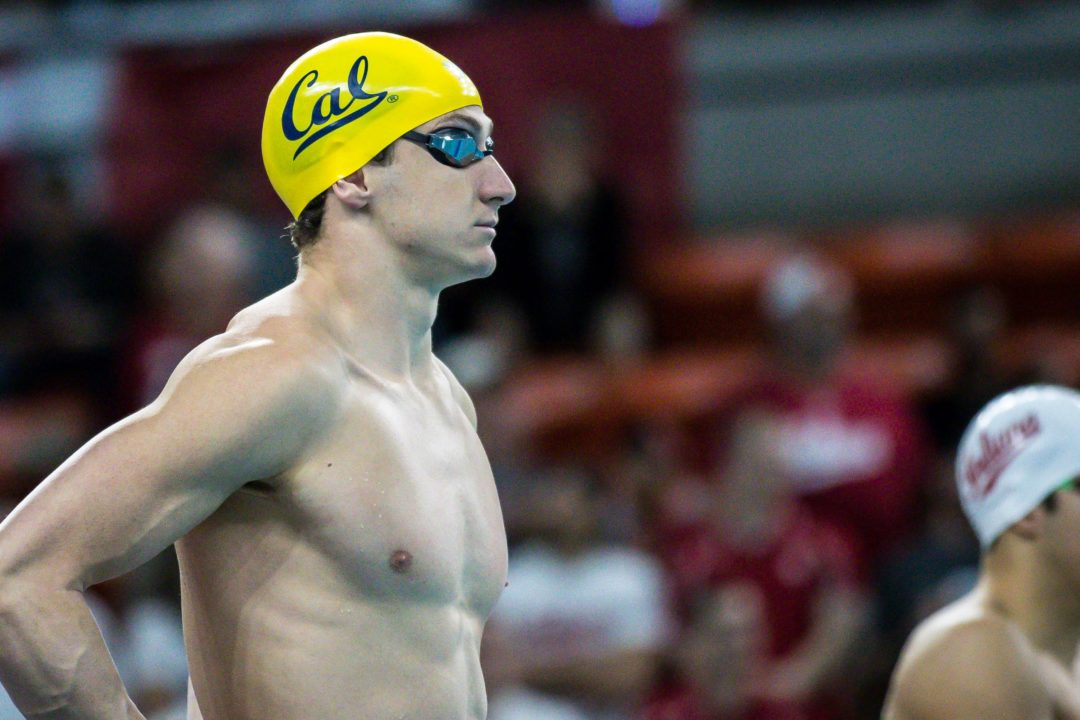 This has been a good year for the 50 free, especially in the freshman class. Three teams have a leg up on the competition in the 200 free relay, though. Current photo via Jack Spitser/Spitser Photography

In 2019, Cal had 18s across the board to win this in a 1:14.46, with the NC State Wolfpack right behind at 1:14.78. Both teams will need to replace three legs; for Cal, that’d be Pawel Sendyk, Michael Jensen and Andrew Seliskar, and for NC State, it’s Nyls Korstanje, Justin Ress and Jacob Molacek.

Cal’s returner is Ryan Hoffer, and as freshman Bjorn Seeliger replaces Sendyk as an 18-point flat-start sprinter, the Golden Bears have the most dangerous duo in the nation.

Bryce Mefford is another option for Cal– he split a 19.5 anchoring their 200 free relay in a dual meet with USC, and he was 19.90 in high school.

The defending champions have their work cut out for them, though. The Golden Bears sit third on the psychs, one of four teams under 1:16 this season.

Florida is the top seed at 1:15.21, a good half-second-plus ahead of Cal, with Texas second in at 1:15.76. Florida is led by freshman phenom Adam Chaney, the program’s best sprinter since Caeleb Dressel. Chaney was one of several freshmen to break 19 seconds in the 50 free this conference season, and his 18.76 leads the nation. The Gators won the 2021 SEC crown in the 200 free relay by almost a full second, getting an 18.62 from Will Davis, an 18.81 from Kieran Smith and a 19.01 anchor from Eric Friese. They may well have four men under 19 seconds, though Cal certainly could if they put Hoffer or Seeliger up front and then Biondi or Mefford get a flying start.

Texas is the only team besides Cal with two men ranked top-15 in the individual 50 free, with Daniel Krueger at 19.10 and Drew Kibler at 19.16. They’re seeded second at 1:15.76. Texas has had nine men break 20 seconds this season in the 50 free, so they could be pushing a 1:15-low or better with a number of combinations. That consistency is great, but they need to be able to match what Florida and Cal have on the top-end to have a chance at touching one or both of them out. Alvin Jiang was 18.7 with a flying start at Big 12s, so they need an 18 up top from Krueger or Kibler and then a fourth 19-low (at least) to win this — that seems doable.

In fourth is Louisville at 1:15.99, claiming the 200 free relay crown at ACCs. Tanner Cummings and Mike Eastman split matching 18.89s on the back end of that relay, while Haridi Sameh led off in 19.15 and Nicolas Albiero was 19.06 on the second leg. The Cardinal relays have been very fast this year, both medley and free, and they didn’t even use 50 free ACC A-finalist Mihalis Deliyiannis on the relay. He was 19.62 at the meet, but 19.25 in 2020, so swapping him in could give them at least a few-tenths drop.

The SEC is deep here, with Georgia seeded fifth, Alabama seventh and Texas A&M eighth. The Bulldog men look fantastic this year, and their sprint relays have already broken school records. Javier Acevedo and Dillon Downing will team-up with Camden Murphy and freshman standout Luca Urlando, as Downing has had a great season (19.14 leading off the relay at SECs) and Acevedo and Murphy have split 18s. Urlando was 19.30 on the end at SECs, but if he had gone the 19.08 he anchored with mid-season, they would’ve been 1:15.98 instead of 1:16.20, so there’s room for growth there. Downing has also been 18.90 flat-start, so Georgia could be roughly a half-second better and right in the mix for a top-three touch.

The Big Ten and ACC each have a couple more teams in the mix (the ACC has Louisville up top, though). For the Big Ten, six-seed Indiana leads, with Purdue at 10th, OSU at 12th and Michigan 13th. Jack Franzman was 18.5 on the second leg to propel IU to the conference title, ahead of Purdue (1:16.50), OSU (1:16.57) and Michigan (1:16.60) all bunched up. Sem Andreis for OSU and Gus Borges for Michigan were 18-mids with flying starts, while Purdue was more consistent across the board with an 18.9 split and several 19-lows.

The final team under 1:17 that we haven’t yet mentioned is Virginia. As their women come off of a historic NCAA title, the ‘Hoo’s are led by yet another breakout freshman star: Matt Brownstead. The rookie won both the 50 and 100 free ACC crowns, and his 18.88 in the 50 sits fourth in the nation. UVA was fourth in this relay at ACCs, getting an 18.9 anchor from August Lamb.

This relay is hard to predict (we say that all the time, don’t we?), in that someone having a good or bad leg can cause a swing of only a tenth or two, but that tenth or two can take them several placements up or down. This feels like it’ll come down to Cal/Texas/Florida, with Louisville, Georgia and NC State having room to drop time and challenge for a top-three spot.

Darkhorse: Penn State (1:17.07 – 16th seed) – Penn State is on the brink of a 1:16, and they have three very strong legs between seniors Will Roberson and Gabe Castano and freshman Jake Houck. The freshman Houck has eviscerated his old best, going from a high school time of 20.7 to his current best of 19.29, while Roberson went 19.17 to take third at Big Tens. Castano hasn’t looked his best this season, but he was 19.06 at Big Tens in 2020, so he might have more to drop. Their question will be the fourth leg, as Zane Sutton was 19.77 anchoring at Big Tens. He might not need to be that much faster though, if Castano can match his best and Roberson and Houck meet or surpass their bests.

Just looking through the top 50 free times, it looks like Ohio State also has two in the top 15, along with TX & Cal, based on a couple ties.

Castano had his second shoulder surgery in the fall so he is the X factor for Penn State. He’s obviously not 100 percent as seen at big tens, but I think he could go sub 19 flying

I think it was knee surgery, not shoulder. I agree if he’s even just a little stronger than he was at B1Gs they have a good shot of improving.

According to the Cal press release Biondi is traveling with the team, meaning he has to compete, meaning he is the fourth guy on this relay. Little surprising, would’ve thought they’d go with Mefford or Lasco.

He can also just swim the prelims and someone could replace him in finals correct?

Happy to see him get his NCAA moment. I feel like they’ll have Hoffer or Seeliger lead off and then have him with a shot at a 19-low or even an 18-high, but with the four relays to a heat, they don’t necessarily *have* to worry too much about choppy water, meaning they could still have him lead-off.

Kid is coming for one relay…. for the sake of the argument, if he gets the flu does the relay have to forfeit? He’s not in any individuals but he has to swim… not sure on the rules

I’m assuming texas doesn’t use Staka or Corbeau who can maybe be a tick faster but have to 2IM later. Maybe I’m wrong

I think Florida goes about their seed. If they were fully tapered (minus smith?) for SEC’s they will be hard… Read more »

Hasn’t Kibler been 18.5? Why would he go slower at NCAAs?