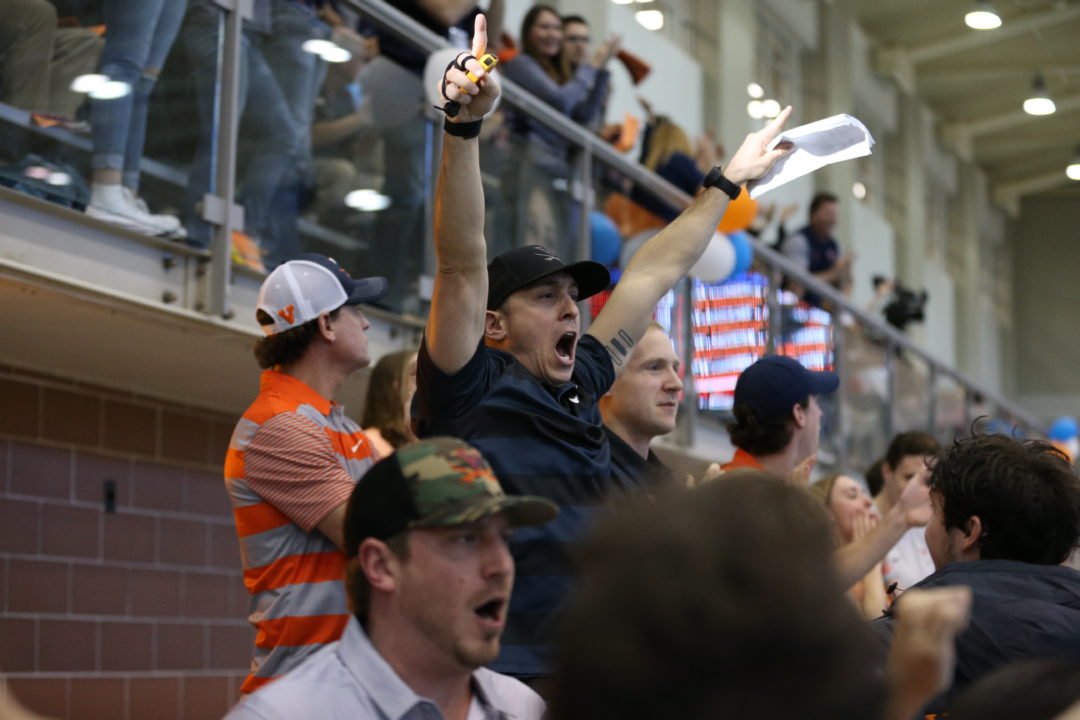 On the women’s side, the #1-ranked Cavaliers won 188-104, touching first in every swimming event, although several were exhibitioned.

Kate Douglass led Virginia with three individual event victories. She swept the sprint freestyles, winning the 50 free by more than a second in 22.43, then coming back to take the 100 free in 48.26, almost a three second margin of victory. She later won the 200 IM in 1:55.27, finishing almost five seconds ahead of everyone else, although Virginia exhibitioned the event. Those times move her up to #1 in the nation in the still-young season in the 100 free and the 200 IM, and #3 in the 50 free.

Fellow freshman Abby Harter swept the butterflies with times of 54.04/1:58.19, good for #6 and #4, respectively in the nation this season.

Senior distance star Paige Madden also earned multiple victories for the Cavaliers. She opened up the individual events with a 9:45.43 in the 1000 free, winning by nearly 18 seconds and also putting up the top time in the nation. Madelyn Donohoe took the 500 in 4:55.96, leading a 1-3 Virginia sweep. Virginia also swept the top three spots in the 200 free, led by Ella Nelson‘s 1:48.37, which moves her into the top 5 this season, while Alexis Wenger took the 100 breast in 1:00.71, #4 in the nation this season.

The Cavaliers had opened up the day with a 1:28.37 victory in the medley relay, then wrapped up the meet by trotting out two squads in the 400 free relay, one consisting of only sophomores and the other consisting of only freshmen. Sophomore Jack Wright had the fastest split in the field with a 43.54 anchor leg, but it wasn’t enough to take down the freshman squad, who won 2:59.27 to 2:59.40.

ANNAPOLIS, Md. –– Navy divers swept all four boards in the season-opening meet by the Navy swimming and diving teams against Virginia, Saturday afternoon at Lejeune Hall in Annapolis.  The Cavaliers, whose women’s team is ranked first nationally and men’s team is ranked 13th in the country, defeated the Mids in both meets.  The score of the women’s meet was 188-104 and the tally in the men’s decision was 181-117.

“It was great to be back on the boards in a meet again,” said Navy diving coach Rich MacDonald.  “We’re definitely a bit rusty, but I was proud of how they competed.  To win all four boards against a team of Virginia’s talent is a testament to how hard our divers have been working.”

Rounding out the list of Navy event winners were Luke Johnson (Sr., Charlotte, N.C.) in the 1000 freestyle and Micah Oh(Sr., Kent, Wash.) in the 200 butterfly.  Johnson touched the wall in a time of 9:14.23 to win the race by over eight seconds and Oh recorded an effort of 1:48.27 to win by six-hundredths of a second.

“Overall,” said Navy men’s swimming head coach Bill Roberts, “I was very pleased with how we performed.  We knew Virginia was coming in with a really good team.  Our guys were adequately prepared for the challenge.  There were a few events we thought would go our way.  When they didn’t, it allowed Virginia to pull away from us.

“Ryan has been doing a terrific job, not only this season but throughout his career.  We were not surprised by the success he had today, and that is due to his approach.  It also was a very good day for our divers.”

“This was a great way to start our season,” said Navy women’s swimming head coach John Morrison.  “Our thanks to Virginia for making the day trip here.

“It has been a long time since we stepped up to race another team.  While the event placings don’t show it, we were extremely pleased with our overall team performances on the day.  Our team did not get complacent going up against the top-ranked team in the country.  And what a great result for our divers!  Hannah Montau was tremendous.”

Navy will resume its abbreviated fall slate of meets Nov. 14 when the Mids play host to Duke.

Annapolis, Md. –  The No. 1 ranked Virginia women’s swimming and diving team and 13th ranked UVA men’s team swept Navy in a dual meet as the team opened the season on Saturday (Oct. 31) at Lejeune Hall.

Virginia set two pool records during the competition with the women’s 200-yard medley relay team swimming a time of 1:38.35 and sophomore Kate Douglass (Pelham, N.Y.) going 1:55.27 in the 100-yard freestyle. Additionally, the Cavaliers captured the top time in 24 of 32 total events against the Midshipmen.

The Cavaliers closed the night with the all-freshman relay team of Brownstead, Brian Brennan (Devon, Pa.), Jan Karolczak (Warszawa, Poland) and William Cole (Prospect, Ky.) recording a time of 2:59.27 for the win.

Quote from Todd DeSorbo
“It was great to be back competing after nine months since our last dual meet,” head coach Todd DeSorbo said. “The team has been working hard to get back into race form and today it was evident we are back. We were happy to have Navy host us and they are a well-coached tough team. Our men and women raced hard and learned a lot about where we are right now and where we need to go moving forward. We had quite a few highlights, quite a few freshmen winning their first ever college dual meet races. It was exciting to be racing again. The women were led by Kate Douglass’ three individual wins, really picking up where she left off last year and setting a pool record in the 100 free. We had several multi-event winners with Paige Madden continuing to thrive, first-year Alex Walsh’s debut and Abby Harter sweeping the flys. The divers are also a young group and are off to a great start this year after not having been in the boards for six months. This team is going to be hard to beat this year.

“The men are young but definitely stronger than last year. Leading the way was Justin Grender and first-year Matt Brownstead with double wins. It was a full team effort as we had six different men win events. It was good to see our first-years embrace the team environment and contribute at a high level as well as our upperclassmen leading the way. I’m looking forward to watching this team develop this season. They’ll be a force by season end.”

Next
Members of the Cavaliers men’s and women’s swimming teams will travel to Richmond, Va., for the three-day Toyota U.S. Open which begins on Nov. 12.

UVA looking very sharp. They have it rolling.