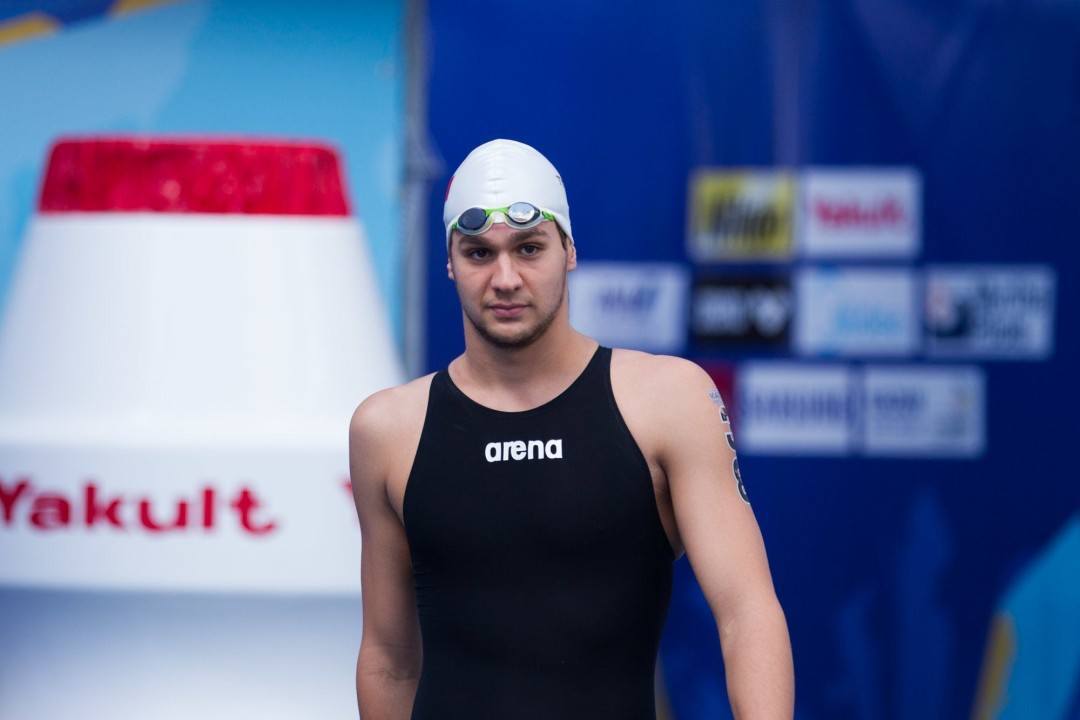 The magical run in open water continued for the French on the final day of action from Lake Balaton, as Axel Reymond edged Italy’s Matteo Furlan for gold in the men’s 25k event.

Reymond was at the front of the race throughout, and Furlan gradually made his way through the pack to find himself in a sprint for gold with Reymond at the end. Reymond took the gold by just six tenths of a second, touching in 5:02:46.40 to Furlans’ 5:02:47.00.

Reymond has one two consecutive 25k titles at the European Championships, but this is his first World Championship medal. Two years ago in Kazan he was 4th, but was well over a minute outside of a medal. Finishing directly ahead of him in that race was Furlan, who moves one step up the podium after his bronze in Kazan.

34-year-old Evgenii Drattcev of Russia, who has four World Championship medals over his long career including a bronze in this event from 2013, won bronze again for his 5th career medal in a time of 5:02:49.80.

Defending champ Simone Ruffini was just behind for 4th in 5:02:53.10, and then there was a large gap to 5th place where American Chip Peterson (5:03:43.00) came in. Following him was Hungary’s Gergely Gyurta, who’s known for competing in the distance events in the pool and will be in action next week at the Danube Arena in the 800 free and 400 IM.

Three swimmers did not finish: American Simon Lamar, Hungarian Olympian Kristof Rasovszky, and France’s Logan Fontaine, who was among the four that won gold yesterday in the team event.

They are very very good. They chose to train instead of going to the last World Cup. Given that a guy like Axel did swim 270,000 in 11 days training might be just as important than racing.

US for sure
Sjostrom Country
Hungary (Men 200 Fly + up to 4 to Katinka).
JPN (Both Men IM/200 breast Male/Female)
Russia (3 Female Breast Medal/Men 200 back)
Can´t see any other country that can rake 4 Individual Gold..

I´ve already added US on the first line (That includes Ledecky..)

You have a Japanese woman winning the 200br?

I’d go with you on Sweden, Hungary, US.

Kaneto is no joke.

She hasn’t raced since October, and is currently considering retirement