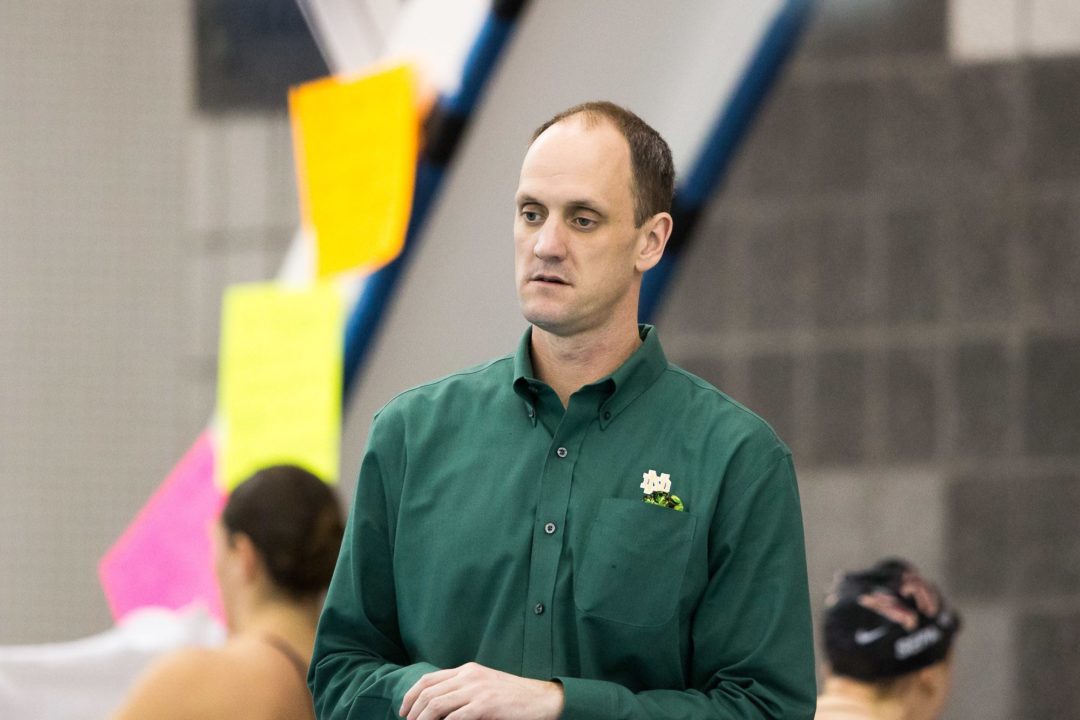 Barnes was the head coach of the Notre Dame women's team from 2008 to 2014. Stock photo via Tim Binning/TheSwimPictures.com

NC State head swim coach Braden Holloway announced today that established collegiate coach Brian Barnes has joined the Wolfpack coaching staff as the new associate head coach. Barnes is taking over the associate head coach role that was left behind by Bobby Guntoro, who recently was named the head coach of UNC-Wilmington’s program.

Barnes has experience coaching in the ACC, SEC, and Big Ten. Most recently, Barnes served as an assistant coach for the Purdue men’s team. Prior to his time with Purdue, Barnes was the head coach of the Notre Dame women’s team from 2008 to 2014. He also served as an assistant coach at Auburn before his time with Notre Dame, where he was part of the Tiger’s back-to-back NCAA sweeps in 2006 and 2007. While at Auburn, Barnes was coaching under elite coaches Richard Quick and David Marsh.

Barnes saw great success with Notre Dame, leading the Fighting Irish to back-to-back 16th place finishes at NCAAs in 2013 and 2014, which still stands as the program’s top NCAA finish. He also coached Emma Reaney to an NCAA title in the 200 breast. During his first season with Purdue (2018-2019), Barnes helped the Boilermakers to 3 NCAA relay qualifications.

According to Holloway, Barnes will be working with the Wolfpack’s stroke and IM groups, while Holloway will take over the sprint group that Guntoro previously led.

Speaking on the hire, Holloway stated “Having coached in the ACC, Big 10 and SEC, Brian evinces a winning culture and has worked with some of the most legendary coaches in the sport. A proven leader, he has certainly shown he has the ability to get the most out of his swimmers in and out of the pool, and his passion for swimming is unwavering and contagious.”

Barnes gave a very enthusiastic statement on his new position, saying “I am very enthusiastic and remain humble for this opportunity to work at NC State. I now get to work every day at one of the most premier swimming and diving programs in the NCAA. I want to thank Coach Holloway and his staff for bringing me here. This is going to be really fun.”

As a swimmer, Barnes completed his collegiate career at Indiana. He was a two-time US National Team member (1989 & 1992), as well as a 7-time NCAA All-American for Indiana. Barnes was an assistant coach at Indiana, as well as Kansas early in his coaching career.

The full press release from NC State can be found here.

Brian is a fantastic choice. Congratulations to Coach Holloway and the NCST Team. Good Luck to Brian and I am hoping Dan Ross and Purdue find a great replacement.

Who is coaching the sprint group? Coach Barnes?

According to the NCState athletics press release… Braden is taking over the sprint coaching duties. He started there in his coaching career

Glad to see Brian getting back into it.

That’s on the nose.

I’m sure Holloway could have gotten another sprint coach to continue the DeSorbo/Guntoro role — so it’s noteworthy to me that he hired Barnes to take over the spot he had filled (stroke/IM) and then will move to sprint coach himself. It’s probably good to mix it up