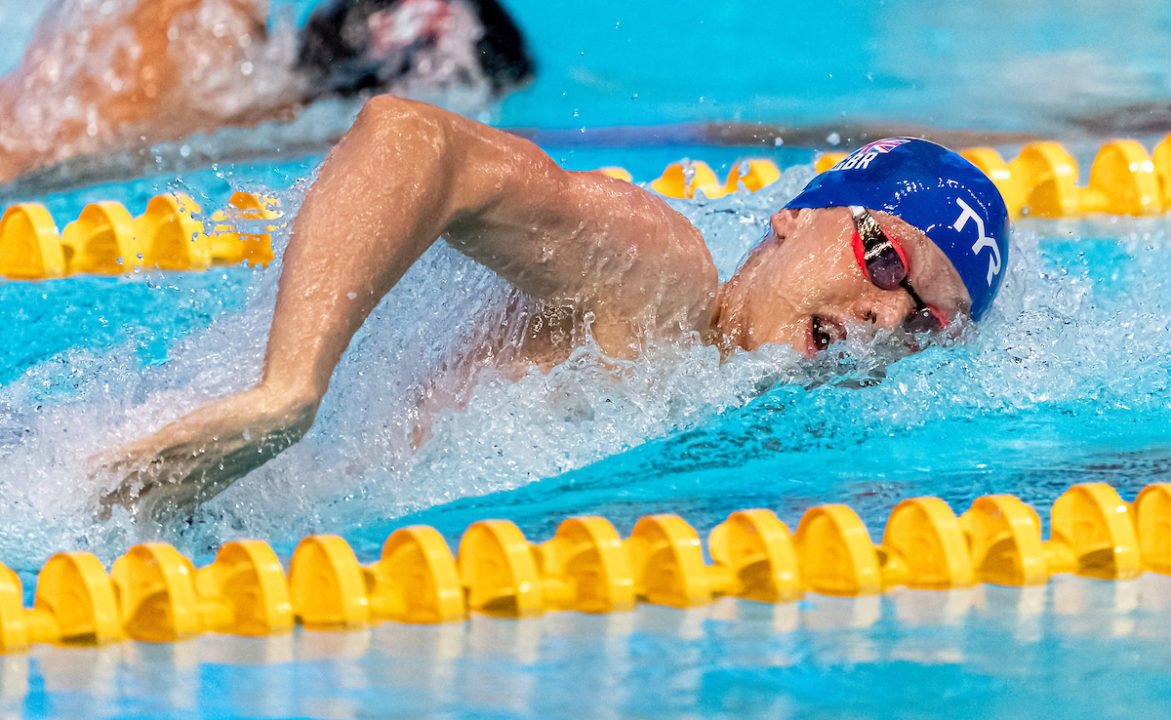 The Royal Wolverhampton ace churned out a huge lifetime best of 48.88 to top the podium in Kazan, dropping over a second from his previous PB of 49.91 he put up at the 2019 British Championships. In doing so, Richards checked in as the 7th fastest British swimmer ever in the men’s 100m free across all ages.

Richards also reaped silver in the 200m free at those Championships, clocking a big-time 1:47.23 to lower his own Age Record for 16-year-olds.

Those performances, paired with the teen’s rapid improvements overall, meant Richards was among the names starting to float to the top tier of the potential British Olympic relay member shortlist heading into Trials season. However, as the coronavirus pandemic hit and things were reshuffled around the world, Richards is among swimmers reassessing and making a change with the Olympics now a year further out.

Having been at the Royal Wolverhampton Swimming Club since childhood, Richards has recently been training at the National Centre-Bath during the pandemic. He was fortunate enough to be one of several dozen that had the doors at the center opened to him while the vast majority of local clubs and training facilities were closed due to coronavirus restrictions.

The 10-week stint at Bath gave young Richards a new perspective on his swimming journey, goals, and quest towards Tokyo, which resulted in the teen deciding to say goodbye to his roots and officially joining the Bath squad.

“I’ve been training here at Bath for the last 10 weeks as part of the return-to-training group. The facilities, the training partners and the support staff, etc. have all been phenomenal and, therefore, led to my decision to move here full-time,” Richards told SwimSwam today.

“With the Olympic season coming up very soon I feel as though I need to welcome opportunities like this with open arms and that’s what I’ve done.”

The move is bittersweet for the rising star, who credits Royal Wolverhampton coaches Marc Spackman and Tom Elgar with his enormous success to date. Richards points out he would not be the swimmer he is today with their investment in him, for which he says he will ‘always be grateful.’

Moving forward, Richards will be training directly under coach Jol Finck Bath. Finck is the former coach of 2015 world champion and Olympic medalist James Guy, with Guy having stayed at Bath but moved to Dave McNulty as of 2019.

With the training base move, Richards will also be physically living in a new location, renting an apartment by himself while he gets acclimated to the new environment. He tells me he’s ‘very excited’ and ready to get to work on improving his 100m/200m freestyle.

Swimmers like Richards, who are on the cusp of breaking through the senior ranks, logically may benefit the most from the Olympic postponement. With strength, stamina, and experience only growing with every racing experience, the additional preparation time should serve to help Richards and other teenagers like him who are hoping to make their first national Olympic teams.

… MAKING THE MOVE TO BATH

That was quite the stretch 🙂

Once I got it, this was hilarious

thank God he didn’t move to Liverpool, that would be a bloody mess

how do you swim in a bath?

I thought he had been there quite a lot recently. Best of luck to him.

Fingers crossed the Bath crew nail their Olympic trep now because we’re buggered in every relay if they don’t 😂 Some freestyle group.

Intended as a lighthearted nod to the strength of the squad