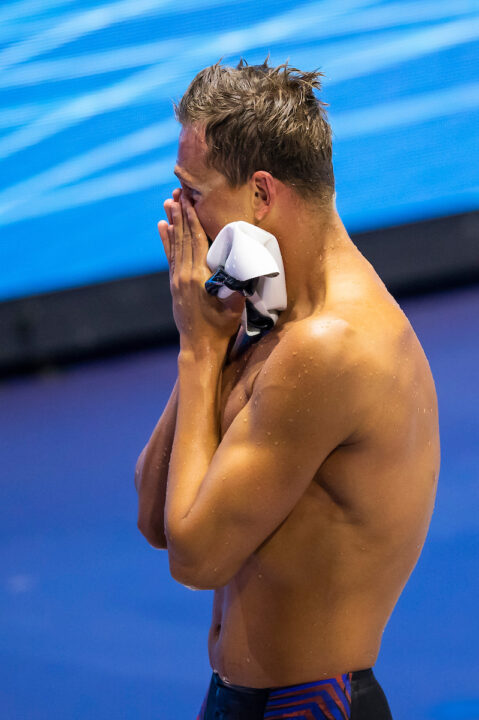 Many of the gold medalists were caught by surprise when they noticed their respective family members waving to them on the giant screen. Current photo via 0© A. Kovacs/Deepbluemedia/Insidefoto

The Budapest organisers commit everything to make the atmosphere in the Duna Arena a bit friendlier despite the lack of spectators. Many winners were caught by surprise when they noticed their respective family members waving to them on the giant screen.

The aquatic family loves to return to Budapest as the Hungarian fans usually create a vibrant atmosphere, even the foreign athletes felt themselves fired up whenever they raced in the Duna Arena. However, the 2021 European Aquatics Championships have to be different due to the well-known reasons in the current Covid-19 situation in Europe – the sanitary protocols and safety concerns demanded to hold the event behind closed doors.

While the athletes are greeted with applause and cheering via the audio system (as it’s usual at broadcasted football games), upon their introduction, at the end of the races and during the victory ceremonies, the local organisers tried to add something unique to make the event even more memorable.

Many winners were astonished upon leaving the pool that all of a sudden one or more of their family members waved them from the giant screen: Hungary’s Katinka Hosszu was greeted by her mother while Ukrainian 1500m free Mykhaylo Romanchuk was really moved upon noticing his beloved wife on the video wall and Romania’s new champion Robert-Andrei Glinta looked also pretty stunned and happy to see his mother just seconds after claiming his first-ever European title.

“We wanted to compensate the athletes for the lack of the usual uplifting cheers from the packed tribunes” said David Szanto, CEO of the organising committee. “Though we cannot create the same atmosphere what 5,000 people could have made here but we came up with this idea and the athletes love it. We tried to reach almost 300 favourites’ families, whenever they gave their consent. Most of them agreed so watch out in the remaining days, you may see some very heart-warming scenes at the end of the races.”

It is also common on the alpine skiing circuit. If the racers manage to get to the end of the race alive they can see their family greeting the survivor on a giant screen. Bonus if she wins but this is pretty secondary.

They should do that for the Olympics, too. Television audiences would also eat that up.

Such a wonderful idea! I love that!