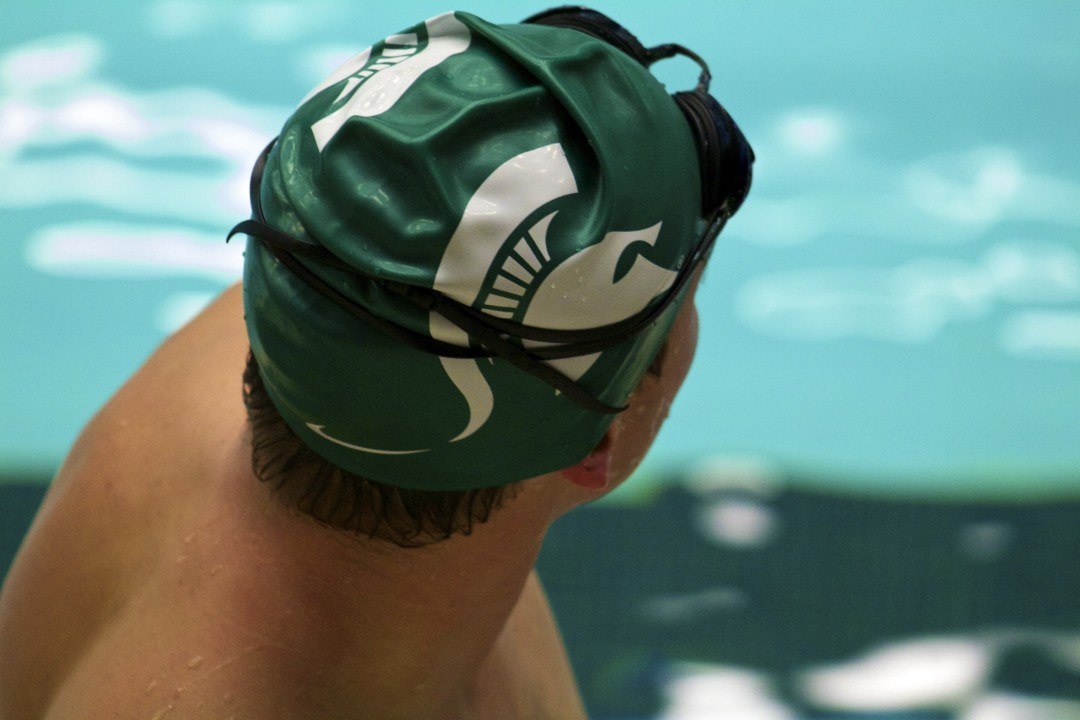 MSU women handled the Ladies, while the Spartan men tied Kenyon in swimming points, but pulled out the win thanks to 1-2 finishes in both diving events. Current photo via Shelby Lacy

Michigan State swept the Division III Kenyon Lords in a dual meet in East Lansing on Saturday, November 9th. The MSU women handled the Ladies by over 100 points, while the Spartan men tied Kenyon in swimming points, but pulled out the win thanks to 1-2 finishes in both diving events.

In the women’s meet, Michigan State won 13 of 16 events, exhibitioning the 100 fly (not swimming for points) to forfeit another event win. Kenyon’s Racine Ross was the official winner in 59.32, however MSU’s Madeline Reilly (57.89) and Kasey Venn (58.09) were the fastest swimmers in the field but both swam exhibition.

Lucy Schenden led a tight race and 1-2-3 finish by the Spartans in the 1000 free. Schenden was first into the wall in 10:24.98, followed by Sarah Zofchak (10:25.26), and Liz Quarin (10:25.79). Shcenden got 0ut to a slight early lead, and held on for the entire race, finishing less than a second ahead of her two teammates. All 3 Michigan State swimmers posted season bests in that race.

The men took home eight first-place finishes and the women finished with 13.

“We had some pretty good swims and our divers really did well,” said head coach Matt Gianiodis. “Jakob Heberling broke a pool record and beyond that they really scored well. Our whole team swam really well, and I thought we did a great job. Erin Szara was a double win, which she usually is. All-in-all, the week we had and coming down here the day off we had great results and I thought the effort was there.”

Senior Allie Heineman picked up her fourth-consecutive win in the 50 freestyle, 24.19, and her second-consecutive in the 100 freestyle (53.17).

Two Spartans claimed their first wins of the 2019-20 season.

Claiming her first victory as a Spartan was freshman Liz Quarin in the 500 freestyle, touching the pad at 5:09.93.

For his third-consecutive win in the 50 freestyle, senior Payton Woods clocked a time of 20.76.

Sophomores Lauren Biglin and Sam Villani finished first in their respective events of 200 freestyle and 100 backstroke. Biglin finished with a time of 1:55.87 and Villani clocked a 57.20 time.

The women’s 200 medley relay came in first place with a time of 1:43.76 from Villani, Szara, Kasey Venn and Heineman.

The Spartans are back in competition on Nov. 22-24 as they head down to Indianapolis, Ind. to participate in the Meet of Champions.

GAMBIER, Ohio – Michigan State University bested the Kenyon College Lords swim team 157-143 on Saturday afternoon at James A. Steen Aquatics Center. The meet was Kenyon’s second in as many days against NCAA Division I competition.

The Lords were led by junior David Fitch who was a part of three event wins.

During the day’s opening race, the 200-yard medley relay, Fitch teamed with Nick Hong, Luis Weekes and Tommy Weiss and posted a winning time of 1:30.94.

Additionally, Weiss’s individual win in the 200-yard freestyle came in 1:43.00 while Mick Bartholomew touched the wall first of the 200 back in 1:51.58. The Lords’ last victory came during the 400-yard free relay. Nicholas Tong, Chris Rutter, Weiss and Marcus Hong competed that event in 3:04.75, which was 0.39 seconds faster than the Spartans’ A team.

Kenyon will return to action from November 21-23 at the University of West Virginia Invitational in Morgantown.

GAMBIER, Ohio – Facing its third NCAA Division I opponent in the last two days, the Kenyon College swimming and diving team struggled to keep pace with the Michigan State University Spartans, who came to the Steen Aquatics Center on Saturday and defeated the host Ladies, 200.5-98.5.

The two teams squared off in 14 swimming events and two diving events. The Spartans came away victorious in all but three.

The Ladies got individual-event wins from junior Crile Hart and sophomore Racine Ross. Hart won the 200-yard backstroke in a time of 2:04.49. Three events later, Ross claimed the win in the 100-yard butterfly, which she completed in 59.32.

At the end of the meet, the Ladies pulled out a win in the 400-yard freestyle relay. Hart kicked off the relay, which also included Celina German, Andrea Perttula, and Emmie Mirus.

Following up on those first-place performances, Kenyon received runner-up showings from Mirus in the 50-yard freestyle (24.55), from freshman Ania Axas in the 400-yard individual medley (4:39.48) and from Hart in the 100-yard backstroke (57.71).

The Ladies now have nearly two weeks away from competition. They will be back in the water November 21 for the start of the three-day West Virginia University Invitational.

> only won by 14 points, tied in swimming, Kenyon had 4 individual event winners

“Swept” referring to “won both the men’s and women’s meets.”

Bring back the Mlive forums. We used to stomp on them hard there.

How is Michigan state so far below the other big ten teams (at least all the combined programs). Northwestern used to be gonna in their tier but that looks like it’s over. I know facilities aren’t great but other teams do way more with less. Are they not fully funded or what?

By combined programs I mean schools with both men’s and women’s teams. The women’s only big ten teams are in the same kinda league as MSU

I think they have very few if any scholarships to offer

I believe it’s the same for their wrestling program. The doormat of the Big 10

Unfortunately, this may be a growing reality in NCAA D-I sports. Swimming costs big $$ and generates $0. We need to be careful criticizing teams for lack of funding, and instead figure out how to help.

MSU is fully funded on both sides. Their “program” and coaching staff are a complete joke.

At least Michigan State has a program

I would love for you to expand upon your “program” comment. As an MSU alum, I can say with confidence that my time at MSU was the greatest four years of my life. I am grateful for the opportunities that MSU gave me. Leaving MSU I dropped time in every event that I swam. To insinuate that the swim team at MSU is not even a program is a joke considering that it is coming from someone who has zero knowledge about the program. Also, please remember that none of us clearly went pro in swimming so it is important to consider academics when choosing a program. So considering that I was able to receive a scholarship from MSU, drop… Read more »